Some lunch carts in Richmond have gone beyond offering great food and established themselves as a city staple. Such is the case with Nathaniel Ramon Gutierrez (known to most as just “Nate”), the owner and operator of the beloved Nate’s Taco Truck.

When it comes to grub-on-the-go, Richmond has a lot to offer locals and visitors from its long list of vending stands and lunch carts. Anything from a quick coffee to sandwiches and wraps can be served up fast in most areas of town including the Fan, VCU, Orgeon Hill, just to name a few.

Some vending stands have not only excelled in their menu options, but have become more of a city staple. Such is the case with Nathaniel Ramon Gutierrez (known to most as just “Nate”), the owner and operator of the beloved Nate’s Taco Truck. 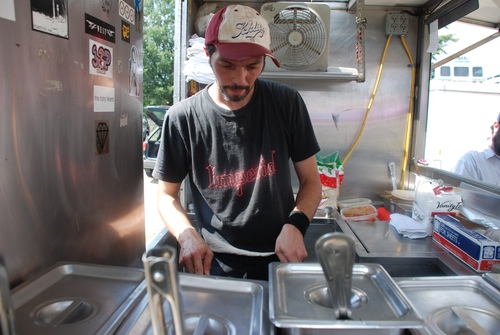 Nate took a break from serving up lunch to hungry Richmonders to speak with RVANews about how he got started in the business.

Where did you grow up?
[I] grew up in Santa Fe, New Mexico, moved to Virginia in high school — Reston, Chantilly — moved to Richmond for Virginia Commonwealth University.

How long have you lived in Richmond?
Since 1993.

Do you have to travel far to get to your selling locations?
Nope, good planning on my part.

Where did you go to school, and where have you worked?
[I went to] VCU for art, graduated with Painting and Art History. Worked at a couple of newspapers, mostly worked in the kitchen since I was 15.

What inspires you?
[Being] a great dad, husband, and taco slinger.

When did you first decide to set start your own vending business?
Six years ago. It took a year of planning, and then it was on.

Can you explain why and what events led you to that point?
I got sick of working for other people, crappy hours, crappy paychecks.

Why tacos?
I love to eat tacos, so it made sense.

Have you ever considered starting another business?
Nope.

Do you have help running the stand?
I had to get help because I kept getting busier and I was running myself ragged.

Have you faced any financial or business challenges since you began?
I’ve never run a business, so it’s a challenge every day. 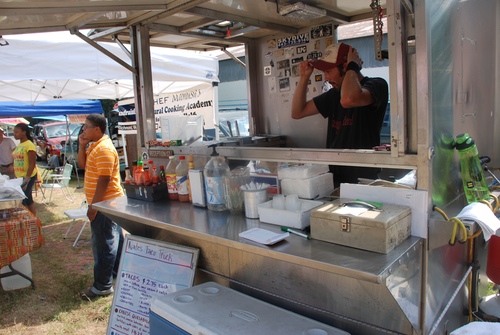 What are the bigger events during the year that you set up to sell?
Best Friends Day is a big one. Tons of kids on bikes hungry for tacos. Earth Day was pretty big, and a couple of big weddings.

Can you describe a typical work day?
No, it varies between Taco Nate and Dad Nate, Summer, and college.

Can the job be hazardous at times?
YES. Just a couple of weeks ago I had to go to the emergency room with heat exhaustion and dehydration. It gets up to 130 degrees in my taco truck sometimes.

How would you describe your relationship with your customers?
I love my customers because they love my tacos. 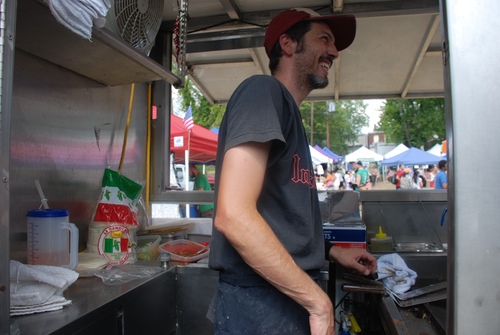 How do you handle the harsh outdoor conditions?
Keep hydrated in the summer, double up the socks in the winter.

What is your stance on local food? Supporting local businesses?
I totally support local food and businesses. I try to get as much produce from the farmers markets as I can.

How did the recession affect you? Notice a change?
Things definitely slowed down, but someone’s always hungry for tacos somewhere.