The week ahead: Cooler overall; break out the umbrella Sunday

It’s been an interesting setup these last couple weeks. The weeks tend to start off (Sunday, Monday) mild, get cooler and wetter during the mid-week (Tues-Thurs) and then warm up again Friday and Saturday. It’s lather, rinse, repeat for each subsequent week. I ran some quick numbers based on the average high per weekday going back to the Sunday after Thanksgiving, November 25. Admittedly it’s a small dataset, but it fits my pattern to an extent:

We’ve been cooler so far this week due to high pressure hanging out over the northeast. The clockwise flow around the high has been pulling cool Atlantic air inland, keeping temperatures down. After being in the 60s and 70s through Tuesday, temperatures have only peaked at 47 and 52 over the last two days.

The high will settle a little farther to the south over the next two days, pulling in a little more warm air and letting temps get a little closer to 60 by Sunday. However, the combination of a developing low off the coast and a second low moves through the Ohio River Valley will do everything they can to keep temperatures far cooler than the three-week average. That’s not all, unfortunately; rain returns to the picture beginning Sunday afternoon as the first low begins to approach from the west. While rain is possible during the day Sunday, I don’t expect to see much – anything more than a few sprinkles, while desperately needed, would be a surprise.

As the low continues northeastward and pulls a cold front through Virginia, the other low will begin to materialize off the coast late Sunday and early Monday, kicking in some moisture from the east. Periods of showers will be expected through a good portion of the day on both Monday and Tuesday.

High pressure will return on Wednesday, ushering in another shot of colder air for the latter part of the week.

It’s a little too early to really look at the Christmas forecast, but I do want to quickly share this graphic from the National Climactic Data Center. Based on the 30-year average from 1981 to 2010, here are the odds that we’ll see a white Christmas. A “white Christmas” is considered to be one where at least one inch of snow is on the ground. 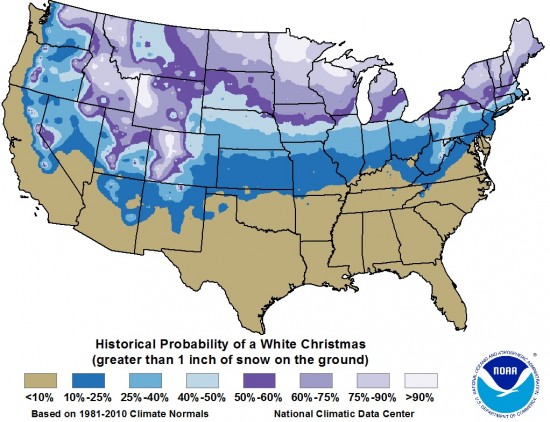 As you can see, the odds aren’t in our favor. Based on the current pattern, I don’t think that our chances for accumulating snow before Christmas are looking very good at this point, either. Only 10 more days…

Speaking of winter weather, the folks at the National Severe Storms Laboratory need your help with a project this winter.

The project, called PING (Precipitation Identification Near the Ground) is simple: when precipitation (rain, snow, sleet, freezing rain – anything!) falls, they want you to report it through their website. Simply tell them where you are, what time you saw something falling, and what it was. Additional information and instructions are available through the websites I linked above.

The PING project has no requirements for involvement; participants can submit as many or as few reports as they like, and there are no age requirements – adults and children can both participate. Teachers, this is an easy project to get your class involved with and tie into an earth science unit. Put your kids to work over winter break as citizen scientists!