The week ahead: Warmer temperatures ahead, a drought update, and a look back at 2012

While this weekend remains cool, we’re looking at a pretty healthy warmup – along with some rain – by later next week.

In last week’s episode, I talked about some signs in the long-range that we would be looking at some much colder air moving in for today and this weekend.

We’re still going to be dealing with a cold shot this weekend and early next week, but it won’t be quite the intensity I thought it would. In fact, in terms of our daily average temperatures, it’s downright seasonable. Our 30-year average high and low for today are 47 and 28, quite close to where temperatures are going to fall over the next couple days.

Beyond that, however, is a very nice warming trend. While the official National Weather Service forecast keeps highs near 55 next Wednesday, it’s possible that temperatures could run into the 60s as indicated on the meteogram (that’s the fancy name for the graph you’re looking at) by the GFS computer model. Don’t get too comfortable, unfortunately; temperatures will return to far more seasonable values (and maybe even colder) beginning about 10 days from now. I’ll have more about this in next week’s update.

Rain-wise, most of the next week looks rather dry. There’s some disagreement in the models right now regarding when the next big rain threat moves into the Mid-Atlantic. While one solution hints we could see rain as early as Wednesday afternoon, I think it’s more likely that we’ll see some slowdown in this and precipitation hold off until Thursday and/or Friday. Not the best way to start next weekend, but considering some of the options, it could be a whole lot worse.

Speaking of climatology and rainfall…while we wait for the official temperature numbers to be crunched by the National Climatic Data Center, local data from the National Weather Service office in Wakefield indicates that 2012 will go down as the warmest on record, dating back to 1881. Our average temperature of 61.11 degrees in 2012 was warmer than the 61.04 average back in 1990, the previous record-holder.

Precipitation-wise, we ended the year with 36.52” of rain, a full seven inches below the average. It’s not going to be among the top 10 driest years on record (and that’s a good thing), but much of Virginia is still quite dry, with over 43% of the state now considered to be in a moderate drought. 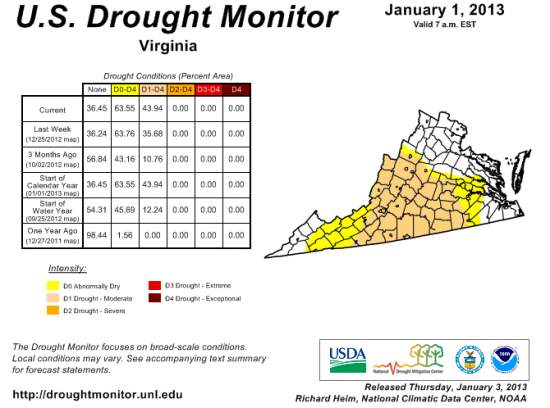 We’re going to need a very wet – and possibly snowy – start to 2013 in order to offset a lot of this drought before spring. If we don’t many of your local farms may be hurting more than they already are.

I’m off to Austin, Texas for a week for the annual meeting of the American Meteorological Society. I hope to have lots of exciting research and news to share this time next week!