The week ahead: warm temperatures linger, but not for long; rain and much cooler temperatures in store by Sunday.

The humidity is on its way out, and our warm weather is not far behind. Rain in store for Sunday will put a damper on your weekend plans; get outside on Saturday. Plus, there’s a sneak peek at the forecast for the Folk Festival next weekend.

You might be familiar with this streamline wind map that’s made several laps around the internet. This screenshot of the map currently shows the big feature we’re looking out for next. 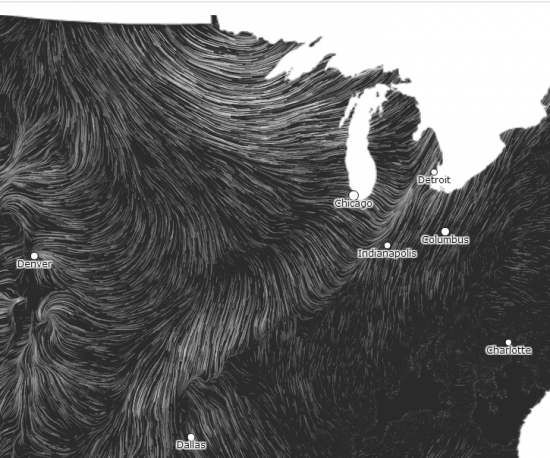 That boundary you see aligned diagonally across the midwest is a rather potent cold front, set to bring some of the coolest temperatures of the season to the Mid-Atlantic beginning Sunday.

Here’s another look at it, from the perspective of surface temperatures. This was taken near peak heating for the day, at 6:00pm. While Thursday’s high at Richmond International Airport hit 82 degrees, it only topped out at 43 in Bismarck, North Dakota. By the time Sunday rolls around, we’ll be dealing with high temperatures only in the low 60s and a potentially wet end to the weekend. We haven’t had a day with a high in the 60s since we hit 67 on June 5th.

But until then, we’ve got more unseasonably warm temperatures in store for Friday and Saturday. Temperatures are going to run near 80 both days, but increasing clouds on Saturday will signal the approach of the previously-mentioned cold front. While the chance for some rain first creeps into the picture beginning Saturday afternoon, I don’t think we’ll see anything widespread or of any significance until Sunday afternoon. If you’ve got outdoor plans this weekend, Saturday’s the day to get them in. Sunday’s forecast right now is pretty suspect, with a lot of unanswered questions about the exact timing and coverage of this weekend’s precipitation. I wouldn’t even be surprised to see a thunderstorm or two on Sunday, though storm activity should stay quite limited.

The front’s passage on Sunday will hold temperatures to a brisk 60 degrees for a high, and we’ll stay in similar territory on Monday. Some of the outlying areas may see some frost, especially Monday night and early Tuesday morning, as low temperatures around the city will dip to near 40. In the outlying areas, they may fall into the upper 30s. The average first freeze date in Louisa over the last 30 years has been October 13, so we’re not that far off. Temperatures begin to moderate some from Tuesday onward, as highs return to near 70 for most of the week. Lows will warm up enough to avoid any more frost concerns, hovering in the upper 40s in the city.

We’re still about ten days out at this point, and any forecast I try to write at this point would likely be rubbish by the time we hit Tuesday. That said, the latest 8-14 day outlook from the Climate Prediction Center puts us at about a 40% chance of below normal temperatures for the period, so I wouldn’t be betting on any quick warmups between now and next weekend.

The good news is that the long-range GFS model is hinting at the return of a ridge of high pressure for next weekend, which would give us some great, if albeit a bit cooler, weather for the Folk Festival. I’m certainly hoping this forecast pans out.