UPDATED: What happened to this past weekend’s forecasted temperatures?

So, about that temperature forecast for this weekend…what happened? The short answer: the wedge always wins. This one had forecasters from Richmond to New York City fooled.

So, about that temperature forecast for this weekend…what happened?

The short answer: the wedge always wins. This one had forecasters from Richmond to New York City fooled.

As I was putting together the forecast Friday, I had noted that earlier in the day that the observed temperatures were running lower than the model projections. It gave me a feeling that models might be underdoing the strength of the cold air wedge, meaning that it wouldn’t erode over the weekend and temperatures wouldn’t make it as high as the models were projecting.

Friday night, the situation was reversed – temperatures were running higher than the model projections, and so I scrapped the caveat and ignored the cold air damming mantra – “the wedge always wins.”

Here’s a look at how everything set up as of 7 A.M. Friday: 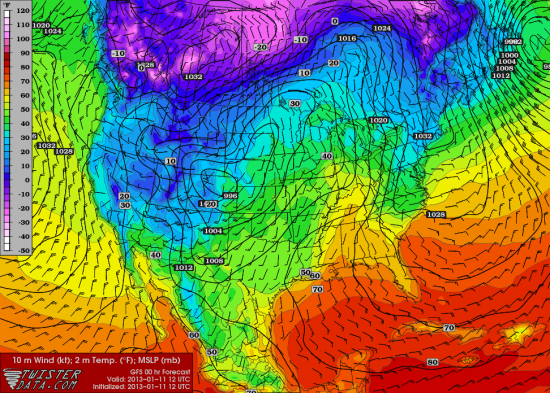 You can see the buckling in the warm front over the Carolinas; the high pressure center over southern New England was driving cooler air from the Atlantic southward. The temperature map shows the area of 30 and 40-degree temperatures that extended well into the Carolinas.

And here’s what we expected to happen: 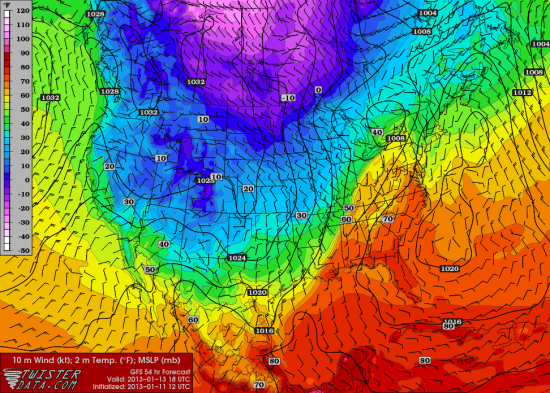 This image is from the GFS model, the primary long-range model run by the National Weather Service and NOAA. While this is just one model, others were painting a similar picture – by 1 P.M. Sunday, temperatures in the upper 60s and 70s would be widespread from the Delmarva south as the warm front advanced northward and displaced the high.

Instead, this is what we actually got:

This was the surface map from 7 A.M. Sunday morning. The warm front had stalled out and become stationary along the Appalachians, and the cold air wedge never eroded.

While we won’t be setting any more temperature records this week, what we are looking at is a bit of rain over the next two days. Here’s the rainfall projections from the National Weather Service’s Hydrometeorlogical Prediction Center:

Enjoy the rain – it’s already on the way. Temperatures are headed back to far more winter-like values after the rain clears out Tuesday.

Greetings from Austin, Texas, site of the 93rd Annual Meeting of the American Meteorological Society. Nearly 3,400 members of the academic, public and private sectors came together over the span of a week to talk about new and sometimes controversial research in the atmospheric sciences.

The past week has been a flurry of talks; there were up to 35 different conferences and symposia running simultaneously, covering topics ranging from atmospheric chemistry, lightning, climate variability and change, impacts of extreme weather, tropical meteorology, and policy. It’s a veritable smorgasbord of weather, and I’m coming home stuffed.

If you’re sick of this whole “cold weather in winter” nonsense, you’re going to LOVE this weekend.

The two peaks on the temperature meteogram look very promising. High temperatures near 70 on Saturday and 75 on Sunday would place us precariously close to the records for both days; they are 71 (Saturday) and 75 (Sunday), both set back in 2005.

“But Weather Dan,” you say, “how can it be so warm this weekend when it was so ugly on Friday?” The answer is our old friend, cold air damming. It is better known as the wedge.

When an area of high pressure gets established over eastern New England, clockwise circulation around the center of the high pulls cool, humid air from the northern Atlantic Ocean and funnels it toward the east coast of the US. In a perfect world, this cold air would spread uniformly westward across the eastern states.

If you remember back to your childhood science classes, you probably recall a principle that declared that cold air sinks and warm air rises. This works not only with phenomena like hot air balloons, but with much larger air masses. I’m oversimplifying this some, but in essence, it’s based on the fact that cold air is denser than warm air. As this cold air gets pulled in off the Atlantic, it tends to sink toward the surface. As all this cold air runs into the Appalachians, it piles up against the mountains and can’t go any further. The wind keeps the cold air “wedged” between the high and the mountains, and what we get is a region of cold temperatures and high relative humidity, leading to lots of low clouds, light/moderate rain and fog.

Passage of a cold front will mark the transition between the warm weekend and much colder part of later next week. A shift in the winds to the south over the weekend will bring still more moisture by the time the front arrives. The interactions we’ll see between the front and this warm, moist airmass means that heavy rain and possibly a few thunderstorms will be likely over the course of Monday and Tuesday. We may see anywhere from 1-2” of rain as the cold front passes over the two days. While it would make things a bit muddy for a few days, a substantial rainfall would be more than welcome for anyone worried about the ongoing drought across the Mid-Atlantic and Southeast.

If severe weather becomes a concern either Monday or Tuesday, check back here for an update.