The week ahead: Spring still lurking below the horizon

Although the days are getting longer, we’re still in a very wintry pattern. There’s a couple more chances for some ice coming up over the next couple days.

Spring’s inching ever closer, but winter is still hanging out for the time being. Meteorological spring begins only six days from now, on March 1st. That doesn’t mean winter is over–some of Virginia’s biggest snows have come in March. Many remember the 1993 Storm of the Century. The latest snowfall on record at Richmond happened on April 28, 1898, when 2” of snow accumulated in Chimborazo Park. Another storm on April 3, 1915 dropped 10” across Richmond, and 1” of snow was recorded on April 7, 2007.

Speaking of winter weather, many of you saw sleet this morning – and several people reported it through PING. Here’s a look at the reports during the busiest 2-hour period, 7:00 – 9:00 AM this morning: 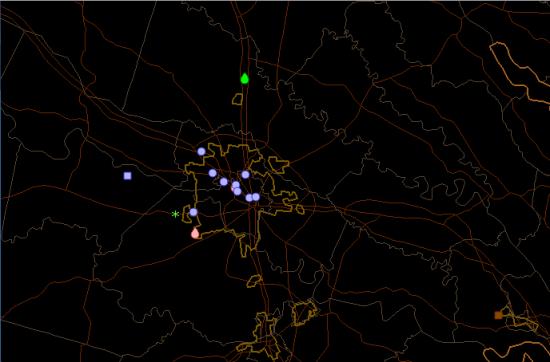 As for what lies ahead, there’s a couple more opportunities for some cold rain and wintry weather this coming week. If you absolutely despise long stretches of sunny skies and warm weather, you’re going to LOVE this week.

My biggest concerns right now lie with late tonight and early Saturday morning, and then with Tuesday morning.

The temperature trends show that we’ll be in the neighborhood, but on the warm side, of the freezing mark during both time frames:

That said, we’re close enough that frozen precipitation (sleet) may still be an issue. Much of the model guidance is trending warmer for Saturday morning. That said, some light sleet accumulation may be possible–especially away from town where temperatures will be cooler. It’ll be cold rain for everyone else.

Tuesday is a little farther out, but based on the temperature forecasts at this point, I’m leaning toward cold rain, again, being more likely than sleet. However, there’s still lots of time for this to change, so keep that in mind as you’re making plans for the next week.

Beyond that, enjoy some sunny days (Sunday and Monday look like the best bets at the moment), and some not-so-sunny days. The start of March is looking both cool and busy, storm-wise, but the days are getting longer and temperatures will continue to warm up over the next several weeks. The latest Climate Prediction Center 30-day outlook shows some good chances for warmer temperatures later in the month.