The models are continuing to support snow on Wednesday. Unfortunately, the amount of snow we’re looking at is dwindling a bit. Remember yesterday, when I issued that caveat regarding how this forecast could go belly-up? It appears we’re quickly getting into that territory.

Model runs from last night and this morning all agree on one of the caveats I pointed out yesterday – a delayed transition from rain to snow. This is the result of a more northerly track of the low pressure center. Counter-clockwise rotation around the low will pull more warm air northward, and have a fairly heft impact on snow totals.

I am no longer confident that Richmond will see even three inches of snow. The potential is still there – but likely only 1-2” maximum. There is a good chance Richmond misses out on snow accumulations entirely.

I hate to be the bearer of bad news and I hate to reverse course on a forecast, but much like that guy on OkCupid, six inches just isn’t going to happen.

Winter storm watches have been posted for the western half of the state, and I expect we’ll see advisories posted for more eastern areas. 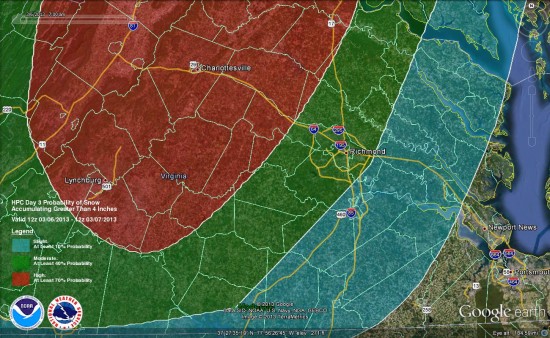 These are the probabilities for 4+ or more of snow beginning 7:00 AM Wednesday. RVA is in the “moderate” category (40-70% probability of occurrence), and I suspect we won’t see this number change a whole lot.

Something to keep in mind: this storm is still about 1,000 miles away from us. While the models are beginning to come into agreement, there’s still time for things to change.

My thoughts here haven’t changed much. We’ll see rain beginning Tuesday evening around rush hour. Rain will continue overnight, changing over to snow by Wednesday afternoon. Everything should wrap up around midnight Wednesday night.

Right now, I’d expect 3-6” of snow for the Richmond metro area. These numbers will drop off quickly to the east and rise sharply to the west. Some of the highest snow totals are projected along I-64 near Charlottesville and to the west on the Blue Ridge and in the Shenandoah Valley.

Don’t forget, this is going to be heart attack snow (the heavy, wet, snowball variety), so it’s going to compact very well. In addition, the wet ground will hamper some of the snow accumulation until temperatures are cold enough to overcome that. These are things that the models don’t always take into account well.

How This Can Go Wrong

This forecast is really contingent on enough cold air getting into central VA before the precipitation runs out. If the changeover takes even longer, we’ll see even less; conversely, if we change over to snow earlier, and have enough moisture left in the atmosphere, we may go even higher than six inches. However, I don’t think that likelihood is very high.

I’m continuing to watch the models as they come in; I don’t envision having to revise this forecast much, but in the event there are some dramatic model shifts, I’ll be sure to update.

It’s March 1st, which marks the beginning of meteorological spring. Astronomical spring–the definition most people are familiar with–will begin with the vernal equinox on March 20.

Happy first day of meteorological spring! In about a month, you’ll have an opportunity to drive a yellow car! =)

The good news is that Spring is practically here, and with spring comes an increased potential for severe weather. There are a few activities coming up that will help you get prepared:

The Virginia Department of Emergency Management is organizing this year’s statewide tornado drill, to be held on March 12th.

Also, the National Weather Service office in Wakefield is putting together their annual SKYWARN storm spotter training classes. They present an introduction to the various types of severe weather, how to identify them, and how to report severe weather to the National Weather Service office. These classes are open to the public, and there is an online option for people not able to attend in person.

Fire in the sky

Some people in western Virginia reported seeing a meteor or fireball in the sky Thursday night. Did anyone else see anything?

The next few days, from today through Monday, actually looks quite tranquil. It won’t be fantastic weather, but it will at least be quiet. Highs will run between 45 and 50, lows will hang out near 30, and skies will be party to mostly cloudy.

The Tuesday-Thursday period is where it starts getting interesting. Models have been showing an area of low pressure developing off the coast of the Carolinas and developing into a coastal storm of varying intensity. We’re still 5-6 days away at this point, so keep in mind that much of what I’m about to discuss has the potential to, and likely will, change over the next several days.

Is it going to snow?

I wish it was a simple yes/no question right now. The potential looks good based on some of the more confident model runs (primarily the European, for those of you keeping score at home). That said, we’re now at a point in the year where the sun is getting higher in the sky every day, and it becomes more challenging for enough cold air to make it south from Canada and over the Appalachians to support a strong snowfall. It’s certainly not without precedent, but it’s a big factor that works against some of the bigger model runs.

Really, Dan–I want snow! How much are we going to get?

Trying to predict exact snow amounts this far in advance of the storm is even harder than determining whether or not it will snow. I wouldn’t put much confidence in exact snow predictions at this time, and I’m not going to make them.

No, I’m leaning toward RVA seeing snow at some point during this storm’s progression. However, that could mean something as simple as some snow mixed with rain and barely accumulating. Right now the odds for snow look best farther west across the Appalachians. Temperatures are projected to be just too close to freezing to have a lot of confidence in a precipitation forecast right now. Two degrees colder, and we’d have a healthy early March snowfall. Two degrees warmer, and it’s just a cold, cold rain.

Enough about what, when do I need to hit the grocery store?

I wouldn’t expect any rain or snow to begin in Richmond before late Tuesday night, and likely not until some point during the day Wednesday. Unless you’re craving some French toast this weekend, don’t worry about grabbing the eggs, bread, and milk just yet.

For those looking for a more technical discussion, I recommend this post from Wes Junker with the Washington Post’s Capital Weather Gang. He takes a deeper dive into some of the model solutions and what the DC area might expect from the system. His conclusion also applies for the Richmond area:

The March 6 storm should be monitored closely. The pattern favors the development of a significant storm off the Southeast coast. Such storms are typically our biggest snow producers. Whether we get snow will depend on the track of this low and whether it tracks up the coast.

Stay tuned, folks. Next week is going to get interesting.