The week ahead: It’s the first week of fall, y’all

We’ve got another shot of cold air coming over the weekend, bringing much cooler temperatures starting Sunday and a shot for some rain Saturday evening. Are you ready for fall? It’s here, whether you are or not. And what happened with this past Tuesday’s severe weather?

We bid adieu to summer tomorrow at 10:49 AM EDT. While I’m sad to see summer go – I enjoy any excuse I have not to wear pants – I know many of you are excited about ridiculous things like scarves and milk- and gourd-infused coffee. And other than a potential for some unsettled weather tomorrow, the first full week of fall is going to be fantastic.

I spent some time talking about Tuesday’s threat for severe weather. Not long after I wrote about our potential for violent thunderstorms (and a tornado), the SPC issued a tornado watch for most of the eastern half of Virginia, and parts of Maryland and North Carolina.

Let’s take a look at what actually happened. Here are the storm reports from the Storm Prediction Center for Tuesday: 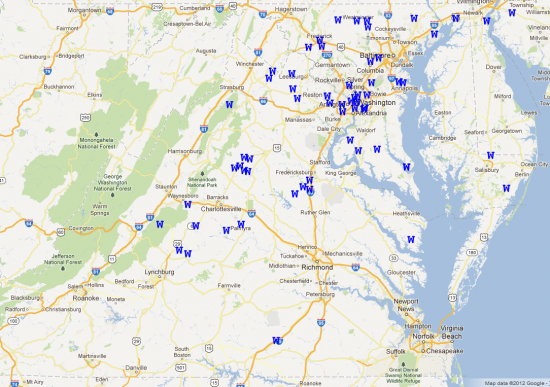 You can see lots of thunderstorm wind damage reports (the blue Ws), but no tornado reports anywhere across Virginia or Maryland. There were two brief tornadoes that were later confirmed in east-central North Carolina, but those were the only reports in the entire country that day.

Thunderstorms need three ingredients to develops: a moist air layer, a source of lift to force air higher in the atmosphere (like a cold front), and an unstable atmosphere to continue lifting the rising air parcel once it is triggered by the cold front.

In order to get storms to rotate and possibly produce tornadoes, we need a fourth ingredient – wind shear, a change in wind speed and/or direction with vertical location in the atmosphere. It takes all four of these ingredients in sufficient quantities to produce thunderstorms of a great enough magnitude.

On Tuesday, wind shear values were incredible. Did you look at the sky at all on Tuesday? You might have seen some low clouds zipping by pretty quickly. That’s because at that level – just a couple thousand feet above the ground – the winds were moving in excess of 80 miles per hour at times. That’s much faster than the speeds we usually observe that close to the ground – those speeds are usually a bit higher in the atmosphere, closer to where we’d expect to see the jet stream. (In meteorological parlance, this phenomenon is called a low-level jet.) We also had plenty of moisture to fuel thunderstorms, and a very potent cold front served as our source of lift.

What we lacked, however, was instability. The atmosphere was very resistant to air trying to lift on its own – it wasn’t very buoyant. If you recall, I mentioned that we needed sunshine in order to really destabilize things; that never happened. A widespread, deep cloud layer stayed in place through the day, blocking out any chances for the sun to really heat the surface and destabilize things.

While it meant that the Storm Prediction Center’s forecast didn’t verify, it’s not a bad thing for those of us that live in the area. The Washington Post Capital Weather gang took a look at this in a little more depth. It’s worth a read if you want to know more.

Our weather is, unsurprisingly, becoming more fall-like. Conveniently, it’s going to be the first week of fall. So, you know, that works out well.

Our only real concern at the moment is a cold front that’s poised to swing through the state during the second half of tomorrow. We’ve been pretty dry, and that will help limit any precipitation that comes with the front’s passage. Rain isn’t likely at all until after 6-7pm, and will move out quickly. There may be a brief bit of thunder, but again, I wouldn’t expect much. Most of the day is going to be very enjoyable, and once the front passes Saturday night, the rest of the weekend will be, too.

Temperatures will make a run back into the 80s tomorrow, the last day in the 80s for at least a week.

Look for much cooler temperatures from Sunday onward. 70 is going to feel quite brisk after our very warm summer.

Savor it, just like you do your milk- and gourd-infused coffee drinks.