The week ahead: Be on the lookout for a rare sighting of Spring-like weather

For the first time in what seems like a very long time, we’re talking about temperatures that don’t start with a three or four. 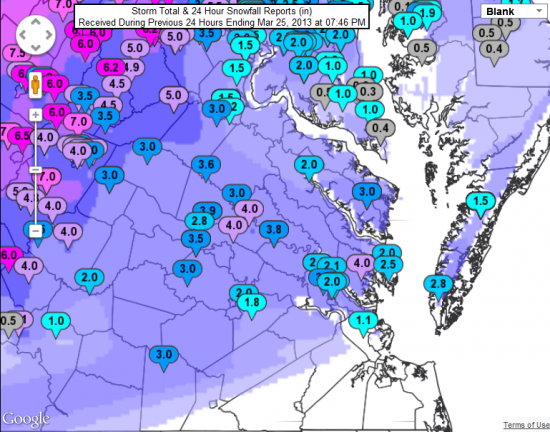 Snow totals from the March 24th storm from the National Weather Service in Wakefield.

Contrary to the trend, this storm was an overperformer. However, I think just about everyone was pleased that it melted as quickly as it did.

Contrast that with my backyard, which was still snow-covered as of yesterday morning and still had an inch in some of the most shaded places as recently as this afternoon.

Speaking of cold weather…through Thursday, the average temperature this month at Richmond International has been 42.8 degrees, 5.3 degrees below the mean March average temperature. The coldest March on record was back in 1960, with an average of 35.9 degrees. If the month ended today, we would be outside the top ten in terms of coldest Marches on record, but not very far – #10 had an average of 42.24 degrees for the month.

The good news is that we’ll end March on a warm note (see below for details), and the Arctic Oscillation index that I wrote about last week has returned from a near-record -5 value to a much more pedestrian -2. Forecasts for the next two weeks continue to keep it in the negative, which isn’t the best outlook for anyone wishing for temperatures closer to the average.

The eastern US isn’t the only region suffering from a significant cold snap. The Washington Post’s Capital Weather Gang has a writeup about record cold affecting parts of Europe. The highlights include the 118” of snow Moscow has received this winter, 180% of their normal annual snowfall, and a late-season snowfall across the central and northern British Isles that took its toll on newborn lambs. The Capital Weather Gang post also mention’s the Arctic Oscillation’s cousin, the North Atlantic Oscillation (NAO), which is also often responsible for east coast cold weather.

I mentioned some good news ahead – and there is some: we’ve got a weekend full of warm weather in store.

Temperatures have peaked near 60 already this afternoon – and we’ll see temperatures in the 60s Saturday through Monday.

This forecast comes with two big caveats, however; the first is that rain is going to be likely on Sunday morning and possible again Monday afternoon and Tuesday morning (possibly mixed with a little sno–uh, I mean frozen precipitation). The second is that the warm weather switch gets turned off just as quickly as it was activated, as temperatures crash back into the 40s on Tuesday and stick in the low 50s Wednesday and Thursday next week.

Take an umbrella with you if you’re headed either to church Sunday morning or to the Easter Parade Sunday afternoon. I’m afraid there won’t be much sun for the bonnet to keep out this year.