Catch up with friends, meet some new folks, drink historic beverages, and nibble on Southern favorites while enjoying the sometimes surprising lush greenery within our fair city at tonight’s Secret Garden Party.

I was giddy as a child to attend the first incarnation of the Secret Garden Party last year, and it lived up to my expectations. The progressive cocktail party, featuring five downtown historic sites and their gardens, happens again this Thursday, May 12, from 5.30pm – 8.30pm. I saw a lot of familiar faces, met some new folks, drank historic beverages, and nibbled on Southern favorites while enjoying the sometimes surprising lush greenery within our fair city.

Bring a date. Seriously — it’s one of the most unique and romantic date occasions you could ask for. Picture it: walking hand-in-hand from site-to-site, sipping on Champagne underneath a giant dogwood tree, stealing away to historic corners, to perch upon bits of stone where ghosts of loves-past once lingered. Sigh. Call that person who you’ve had your eye on. It worked for me. Now the secret garden party has become a personal anniversary of sorts.

Get there on time — there’s a lot to see and with travel time the night gets away from you. The sites are absolutely walkable, so wear comfortable shoes. A free shuttle is available, but I never once saw it last year. It’s probably faster just to walk. Park at the VCU Hospital Deck at Leigh & 12th streets, the VA Department of Transportation lot at E. Broad and College Streets, or anywhere on the street (what I did). Very limited parking also is available at the Valentine Richmond History Center lot.

You have until 5pm today to get tickets ($30/single, $50/couple). After that, the price at the door goes up to $35/single, $60/couple. The price includes one drink ticket and food at each site and admission to the historic sites themselves. 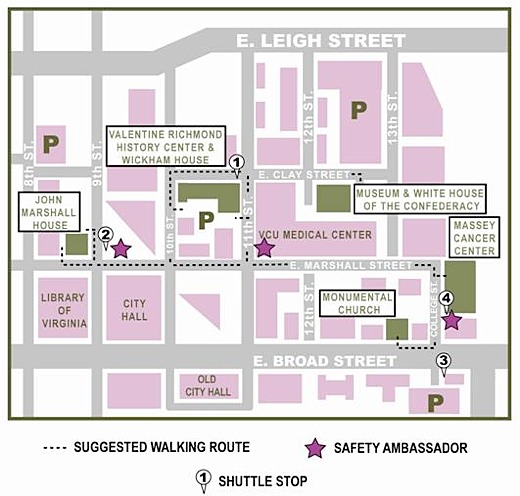 You can start at any site you wish, but I recommend the order below, both for ease of progression, and also flow of atmosphere.

This picturesque, private green space is nestled among high brick walls and magnolia trees and extends from the portico of the historic Wickham House, an early 19th century home built by prominent attorney John Wickham, who raised 17 children on the property.

The Museum of the Confederacy contains the largest collection of Confederate artifacts in the world. The historic White House of the Confederacy, located next door, has been meticulously restored and displays personal belongings of the Davis family, which lived in the home from 1861-1865.