The “building” theme continued with our excursion into eastern Kansas yesterday, but not before taking a very significant turn very quickly.

Above: A supercell thunderstorm develops over the plains of eastern Nebraska.

WALNUT, Iowa – The “building” theme continued with our excursion into eastern Kansas yesterday, but not before taking a very significant turn very quickly.

Our morning meeting centered around the decision of exactly where to chase on Saturday, and included the possibility of not chasing at all, and taking the opportunity to set up for Sunday, which would likely put us in eastern Iowa or central Illinois.

None of us wanted to punt Saturday, but we were looking at almost a 10 hour drive to get into the proper location for Sunday.

It was not far from any of our minds that Sunday was also May 22, which has historically been a big day for the Hokie Storm Chasers.

We had decided on a target of El Dorado, Kansas. However, as we departed Salina, our analysis of the conditions showed that we needed to reevaluate. Southeast Kansas, where we had originally targeted, was showing a very strong capping inversion, meaning any storms would not develop until very late in the evening. Because we HAD to get into Iowa tonight to get set up for tomorrow, staying in southern Kansas until dark wasn’t an option.

Luckily, we were seeing signs of development in southeast Nebraska. We made a quick decision: to go north instead. A quick u-turn on I-135 sent us north towards Hebron, Nebraska, where we intercepted and tracked a supercell north of I-80 near York. 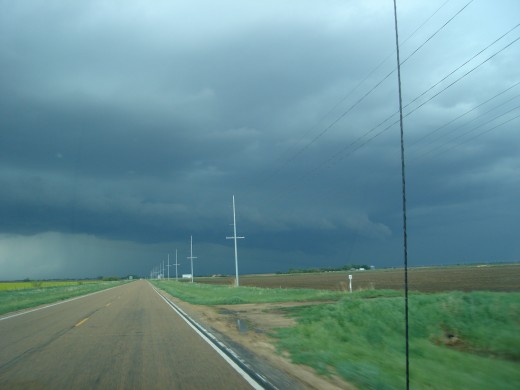 A look at the base of a high-precipitation (HP) supercell between Geneva and Clay Center, Nebraska.

We got another great view as the supercell developed first to the west and moved to our north. While observing along a road northeast of York, a local farmer stopped by and showed us hail dents on his truck, and told us that his wife had lost her windshield to ping pong ball-sized hail back in York.

We made a second stop just up the road a few minutes later, where Andrew discovered hailstones in the grass alongside the road. We estimated it was the size of golf balls. 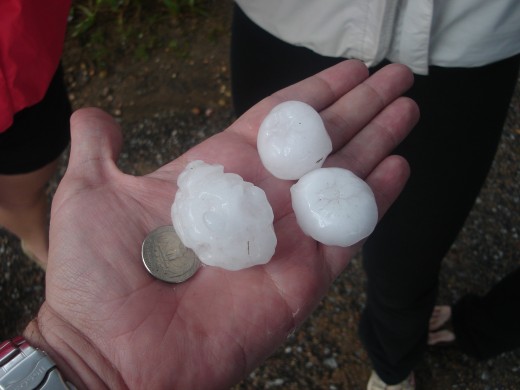 Hailstones up to golf ball size (1.75" in diameter) located along the highway south of Gresham, Nebraska.

We also observed a lowering cloud in the storm; it didn’t look quite like a funnel to us, but someone else reported it and the storm quickly received a tornado warning — our first of the trip. We didn’t spy an actual tornado; in fact, because of the road network we were forced to separate from our closest approach to the storm. We didn’t see anything that actually looked like a tornado before any circulation became rain-wrapped.

After some additional detours for road work, we caught back up to the storm, and we spent some time on the side of the road watching as it cycled down. After a slightly less than healthy dinner in [Redacted], Nebraska*, we were treated to a fantastic light show from lightning off to the east from a line of storms moving through central Iowa.

We’re slowly working our way east now; tomorrow’s chase will take us into eastern Iowa and possibly Illinois. We’ve only got two or maybe three chase days left before we wrap this trip up and head home. As we go to sleep tonight, I think all of us on the crew are hoping for a little May 22nd magic. 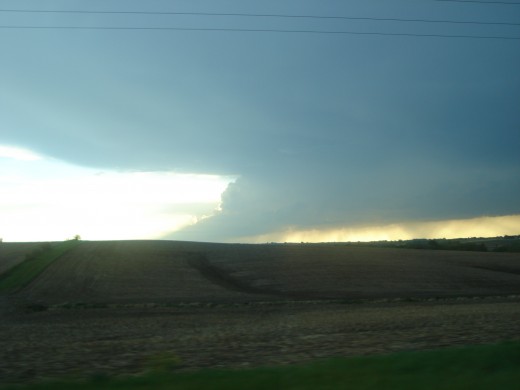 A large wall cloud descends below the base of a supercell thunderstorm in eastern Nebraska.