It’s been a long three chase days on this trip. Some of the biggest names in storm chasing had nothing good to say about today’s setup; could it be possible that we fared better than they?

Above: An inflow tail (or beaver’s tail) leading into a developing supercell thunderstorm (overhead) located southwest of Greensburg, Kansas.

Veteran storm chaser and meteorologist Reed Timmer tweeted that he was taking the day off.

We’ve had three consecutive days of completely nothing. We couldn’t just sit around and take a pass today, could we?

We didn’t, and it paid off.

Yesterday, I mentioned we had a decision to make today: whether or not to chase in Kansas today and tomorrow, and then move into the Ohio Valley for Sunday and Monday before making our way home, or to instead make a long push into Texas south of the Red River today, and then chase today, Saturday, and Sunday before spending Monday, Tuesday, and Wednesday on the road back to Blacksburg.

We spent time last night following our late arrival in Salina reviewing not only the models and National Weather Service discussions, but also our expectations for this trip. After sleeping on it and meeting again this morning, we came to our decision: we would stick with the northern route. We figured we could get two more chase days in Kansas, and then some opportunities across the plains of Illinois, Indiana, and Ohio.

Pratt, in western Kansas, was our target today. Thanks to our proximity, we were able to leave a little bit later this morning, and got to relax a little bit and shake the memories of yesterday’s horriffic chase from our system. On our way to Pratt, it quickly became clear that today’s storms were starting to fire much earlier than expected. What we had hoped would be a leisurely lunch stop once we reached town quickly turned into just a very short break, consisting of only enough time to make a sandwich and hit the bathroom before we got back on the road. 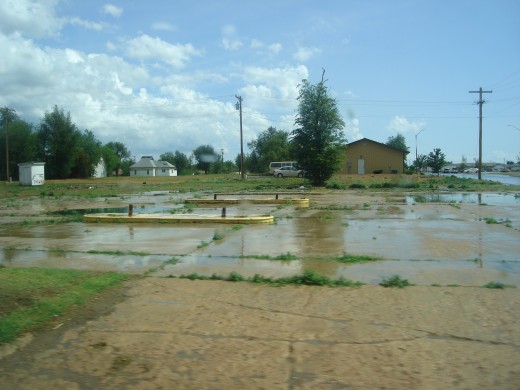 An empty lot, never rebuilt following the rebirth of Greensburg.

South of town, we made our first intercept of the day, as the southernmost cell in a line quickly intensified and headed towards us. We were able to stay in position long enough to experience the rear flank downdraft (RFD) of the storm. The RFD is an area of descending air along the back side of a storm; in stronger storms and supercells, it can be quite intense. In the span of seconds, we went from having a light, warm breeze at our backs to being hit in the face with strong, cold wind gusts in excess of 30 miles per hour.

Over the next four hours, we played tag with this cell multiple times as it slowly tracked east of Greensburg, into and then east of the neighboring town of Pratt. We got hit with the RFD a second time as we observed the tornado east of Greensburg, where we also jabbed at the core of the storm and spent two separate occasions parked on the side of the road in an effort to avoid some small hail. (I’m told the university’s motor pool doesn’t like it when you return vehicles with hail damage.)

After spending about four hours observing the storm, which showed signs of rotation multiple times, it finally dissipated without spawning a tornado. Several more cells spawned, and we were able to spend the remainder of the evening in an area from Pratt to Arlington to Kingman going around and observing several more cells pass nearby. Several of these contained hail large enough to meet severe criteria, including one report of hail 1.5” in diameter near the town of Langdon. 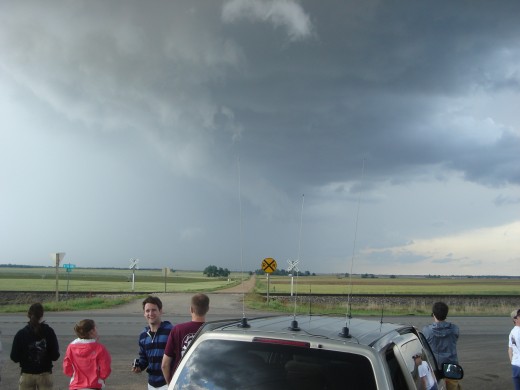 The Storm Prediction Center issued a severe thunderstorm watch for most of our chase territory during the afternoon; we successfully made an intercept on every storm that received a severe thunderstorm warning before the watch was cancelled. We spent upwards of an hour and a half just prior to sunset watching the same storm slowly advance eastward towards us over the rolling Kansas plains.

There’s something peaceful about standing on a dirt road, listening to frogs and crickets chirping nearby, rumbles of thunder in the distance, and a tall thunderstorm illuminated underneath by the sun and bursts of lightning from within.

We’ve settled on our north route, but we face another decision on Saturday: do we chase in east Kansas and then make a 10-hour push to chase in northwestern Illinois on Sunday? Or do we punt on Saturday, and head straight for Iowa and Illinois? It was a late night tonight; after getting into the motel past midnight and then doing laundry,

Incidentally, it didn’t hurt that there were no tornado warnings issued in Colorado today. 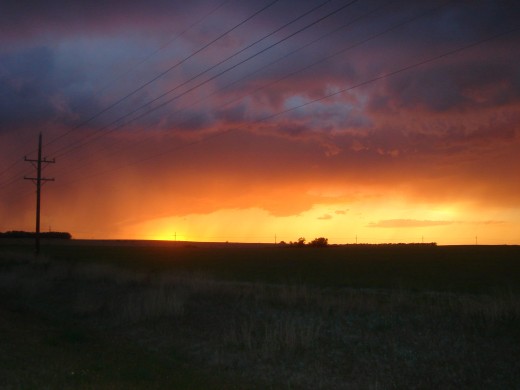 Sunset illuminates the base and precipitation core (left) of a severe thunderstorm east of Greensburg, Kansas