The Virginia Tech storm chase team has struck out for two consecutive days. Would the third time be the charm?

Above: the water tower that greets you upon entry to the town of Wakita, Oklahoma. Wakita was featured (and subsequently partially destroyed) by a violent tornado in the 1995 disaster flick Twister.

SALINA, Kan. – What started out as a day with a lot of promise turned into yet another day without a tornado.

For the third consecutive day, tornado warnings were issued in eastern Colorado.

For the third consecutive day, the Virginia Tech chase team failed to see a tornado.

I’m making this sound a little worse than it actually has been. We had an incredibly marginal day, followed by a less marginal day that was foiled by the atmosphere. 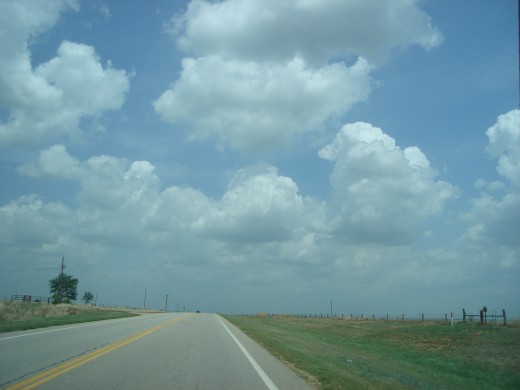 A field of towering cumulus clouds (and thus potential thunderstorms) awaits us across the plains of southern Kansas.

Today, we were foiled yet again. This time, though, it wasn’t because no storms fired. Actually, just the opposite happened — numerous storms fired in our primary chase territory of central Kansas. We started in the area around Pratt early this afternoon, but quickly chose to move north as we chased a warm front into the vicinity of Interstate 70. As these storms progressed and intensified, they all congealed together into one large moving line of storms.

With a large mass of storms together, what we were stuck with was a big mass of low clouds and rain around each of the storms – something most of us are now referring to as the “grunge-fest.” (They were far cooler in the 90s when one could see Nirvana and Soundgarden and not ever have to change out of the same flannel shirt and ripped jeans.)

We got a good look at a couple wall clouds, and even advanced on a shelf cloud from behind, but we missed out on the couple tornado-warned cells that were nearby, including one that received a warning just after we called off our chase for the night. 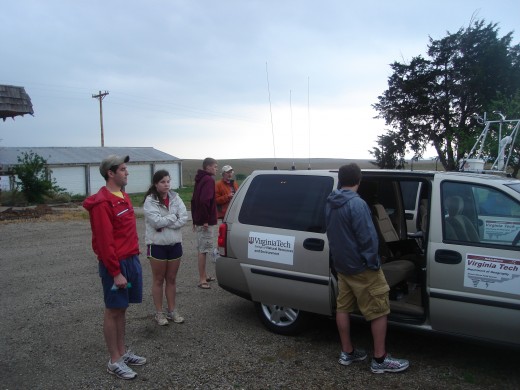 It was a very frustrating day. There were high expectations, and storms began early enough that we were chasing from about 1pm until dark, which isn’t happening until well after 8pm in this part of the country. We didn’t get to our hotel for the night in Salina until after a late dinner and arriving after 10pm. I’m now just getting the opportunity to put my thoughts and experiences into text at 1am (Central time!) and I’m far from actually doing today’s experience much justice.

Today marked the halfway point of our trip. Tomorrow, we face a decision: do we stay north, and follow this low pressure system all the way home? Or do we stay south, chase some more opportunities in Oklahoma and Texas, and then make a longer push home a day earlier? We’ll have to answer that question – and several others related to it – in the morning before setting out. Tonight marks the first night where I truly have no idea what our chase target will be.

Today’s adventure was both frustrating and demoralizing. We’ve got a great crew, and we’ve been forecasting well – we just don’t have the results to show for it. But tomorrow is another day, and our opportunities for seeing what we came to see are far from over. That is a mantra that we must continue to repeat.

Tomorrow is another day.