A look back at the snow storm that (almost) wasn’t, along with analysis of where things went wrong, and some thoughts for the future.

Let’s start with some snow totals. Here’s a map of reports from central and portions of western Virginia as compiled by the National Weather Service offices in Wakefield and Blacksburg. 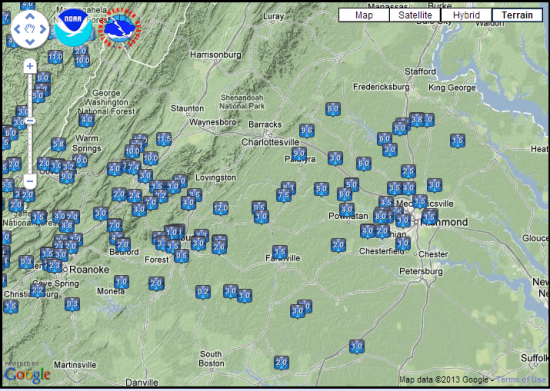 Snowfall reports from the National Weather Service office in Sterling, VA (responsible for the northern portion of the state) were not provided in a format that could be consumed by this map. You can find their snowfall totals here.
Note that the snow cutoff paralleled US 301 and I-95 fairly well for the eastern part of the state.

Also, the gradient between the “haves” (those with a significant snow) and the “have-nots” (like those east of Richmond) was incredibly tight. From a photo posted on the Wakefield National Weather Service Office Facebook page: 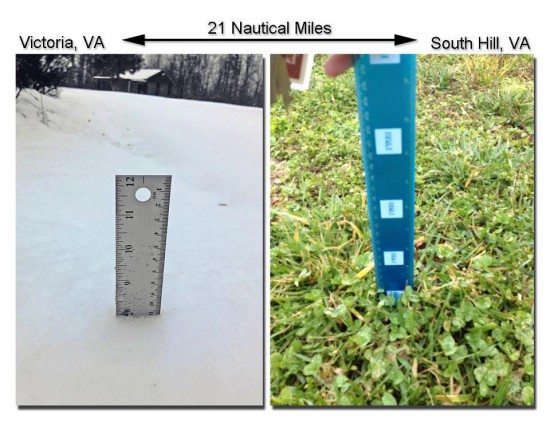 (By the way, 21 nautical miles is a little more than 24 statute miles.)

As far as the forecast goes, I’ve heard from some of you already, and I’d like to hear from more. What were you using for forecast information and how did you think it compared to where you live?

For me, this was a frustrating storm to try to forecast. Outside of the highest-confidence areas in northwestern Virginia, it was difficult to get a read on the exact track of the storm among the various models. I initially went with the 3-6” forecast, partially in response to the fact that I’ve tended to underforecast some events as of late. Despite having high confidence in the snow totals that came with the next rounds of model guidance (which were virtually all lower than my 3-6” forecast), I was still concerned that Richmond may not see any snow at all. I had also expected the heavier snow to fall farther west, but I saw at least one report of 8” near the Chesterfield/Powhatan border.

Several other regional meteorologists have written some in-depth posts about the forecast this week, many of them on the same general subject: model use and interpretation (or “the democratization of weather data”), how to express confidence and uncertainty in a weather forecast, and media hype in general. They’ve all made some very strong points and I urge you to take a look at some other perspectives.

Some of these topics are items I touched on some at a talk I gave last November at TEDxVirginiaTech. This conversation can go way beyond snow in Richmond. Many times, science tries to take a “deficit model” approach–there’s something scientists know that the lay public doesn’t, and it’s very easy to want to foist that knowledge upon everyone. But especially now, the forecast process is a two-way street. It’s not a lecture, it’s a conversation, and it would be irresponsible as forecasters not to consider both what the public knows and what the public wants to know.

I’ll end by asking this: what do you want out of a weather forecast?