Secco: Better than your neighborhood bar

Anyone who’s tried to open a restaurant in Richmond knows the city can be unforgiving and meticulous about rules and code. While clearly the process of opening the hottest new wine bar in Carytown has taken its toll on owner Julia Battaglini, she still keeps her wry sense of humor. “I try to only bother people with two bureaucracy stories a day,” she quipped.

Anyone who’s tried to open a restaurant in Richmond knows the city can be unforgiving and meticulous about rules and code. While clearly the process of opening the hottest new wine bar in Carytown has taken its toll on owner Julia Battaglini, she still keeps her wry sense of humor. “I try to only bother people with two bureaucracy stories a day,” she quipped.

I talked more with PR/Marketing guy, Matt Brehony, who, like all of the staff, wears many hats. He’s a chipper balance to Battaglini’s more dry banter. He’s leading my interview, writing press releases, directing traffic, and will also bartend and serve. “It’s a familial atmosphere,” he admits.

Brehony tells me that the idea from Secco came out of concerns about the success of the wine shop next door, River City Cellars. Small business advisors basically told Battaglini she had to expand. “Put it in a glass,” they said. Five years later, Secco hopes to finally open this week, provided the ABC license clears, a familiar hurdle for any restaurant. 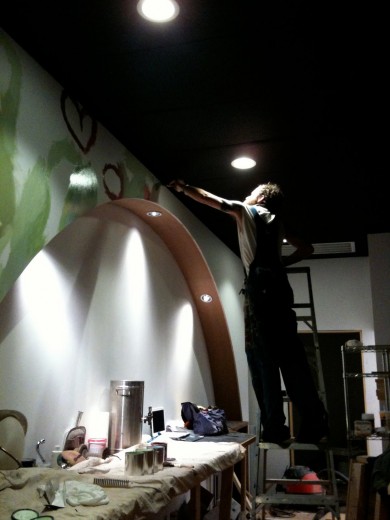 The space is neutrally colored yet lushly dark and inviting. The natural wood-colored bar and tables are offset by a dark wall, shiny black floor, black chairs, and brown leather couches at the front. The colorful pastel, cartoony mural behind the bar is by Chris Milk and will change seasonally. Layers of wood on the back kitchen wall were assembled by designer/owner Tom Brickman “in an almost pointillistic way” says Brehony, from pallets of wood from the Habitat for Humanity ReStore that would have been thrown away. The result is a resourceful and textured accent wall.

Beige curtains line the Sheppard Street side, only adding to the air of mystery surrounding the opening of the space. Black and red colors draw your attention to the modern signage on the prime corner spot, all windows and welcoming.

The place only seats about 26, but it doesn’t feel small. Four tables with four chairs each line one side and ten seats are at the bar. The couch area in the front can seat about four to six people.

Secco gets nerdy about the food and beverage, sending out the wittiest and most detailed press release I’ve ever seen. “Our approach to food and wine is really different. We’re serving traditional, Mediterranean dishes that you just can’t get in Richmond. Really, really affordable,” Battaglini declares. 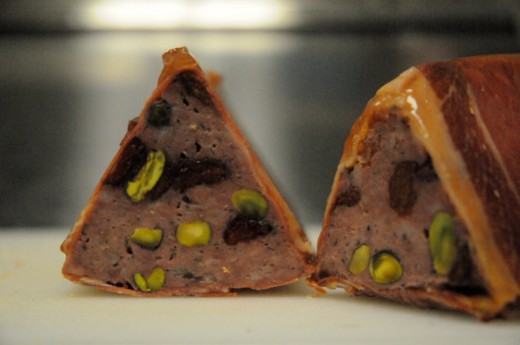 Nothing on Executive Chef Tim Bereika’s small plates menu is over $12, and most hover around $5. When asked about his favorite part of the menu, Brehony responds, “The fried Castelvetrano olives. People are going to lose their minds over them. They are surprisingly light for something fried and stuffed with gorgonzola cheese.” ($7). Cheese guru Sara Adduci proudly showed me photos of their cheese plate. Served on slate with chalk-written titles, it’s both rustic and contemporary.

Secco features two dozen by-the-glass offerings, only a handful of which are priced above $10, with more than half available for $6 or less, allowing you to discover the best kept secrets of Spain, Italy and France for what you would normally pay for a pint of domestic beer. “We’ll have ones you won’t see anywhere else in town, mostly small producers, just because that’s where our palates have led us,” assured Brehony.

A lot of the investing for the project was done with micro-funding, smaller funds from individual investors. In the short time I was there, handfuls of people stopped by to wish the staff their best or shouted encouragement from cars as they drove by. Secco really seems like they could be the classier, prettier, yummier version of your neighborhood bar. The neighborhood is ready.

So despite the bumps, Battaglini tries to be upbeat. Referring to the difficulties as of late, including a fatuous battle with the city over a sign that wasn’t even hers, “I do love a good cocktail conversation, and I have so many now. All I want to do is put delicious wine in a glass and delicious food on a plate.”