As the summer of 1861 began, events in Richmond had the city in a state of anxiousness and excitement. In May, a statewide referendum made official Virginia’s secession from the Union. Near the end of the same month, Richmond was named the capital of the Confederacy, ensuring its status as a target of Union forces. So as June began, a lot of attention was being paid to the protection of Richmond.

As the summer of 1861 began, events in Richmond had the city in a state of anxiousness and excitement. In May, a statewide referendum made official Virginia’s secession from the Union. Near the end of the same month, Richmond was named the capital of the Confederacy, ensuring its status as a target of Union forces. So as June began, a lot of attention was being paid to the protection of Richmond. The first article from Richmond’s newspapers that I found was dated June 1st:

We allude to these again not to reproach any one for tardiness, but to increase the zeal, if possible, of those who have already done something. As speed is desirable in the matter, we call upon all who can spare either labor, or digging, or wheeling tools, to report the same verbally or the letter, to either his Honor the Mayor, or T. H. Wynne, L. W. Glazebrook, or N. B. Hill, the Committee appointed to take charge of this work, and they will be informed where the same can be used to a better purpose than is probable, they have ever before been applied to. Richmond Dispatch, 6/1/1861

The fortifications surrounding Richmond were built mostly by slaves and free blacks. As the war progressed, soldiers themselves would also help to build and strengthen the fortifications while they occupied them. During the first year of the war, there were roughly 12 miles of fortification protecting Richmond. By 1864, they would grow to nearly 120 miles including several batteries and forts located strategically around the city. Robert E. Lee, a former member of the Army Corps of Engineers, gained a reputation early in the war for digging fortifications and defensive positions around Richmond. The soldiers, who much preferred fighting to digging ditches, gave him the nickname “King of Spades”. Those soldiers, however, would later find themselves grateful for their protection during the siege that took place in those same fortifications in 1864.

I decided to drive out to see some of the fortifications around Richmond. There are several locations, but some of the best are located less than 10 miles south of the city at Fort Harrison. Several other forts are nearby, so you can easily make one trip out of it and cover a lot of ground. Essentially, there were three types of fortification surrounding the city – artillery batteries strategically placed to maximize the effectiveness against approaching troops, forts to house more artillery along with soldiers and supplies, and simple trenches that maintained a line of defense for soldiers. They were made almost entirely of earth and wood, which is why you often see old photos of fortifications almost completely barren of any nearby trees. All three types of fortification are plainly visible just a short drive away and are still impressive considering we’re looking at them almost 150 years later.

However, back in 1861 while the fortifications were yet unfinished, another call for assistance was issued by the Richmond Whig:

Are the defences necessary? If so, the sooner they are completed the better. But laborers are needed to do this. Some liberal and patriotic gentlemen of Richmond have freely supplied labor. All who have not done so who have surplus and idle labor. The Mayor of Danville has sent down twenty-four able-bodied free negroes. Not one free negro from the city of Richmond or county of Henrico has been on the works. Why is this? Two gentlemen, eminent physicians from the county of Lunenburg, have brought, the one fifteen, and the other six men, (the best we have,) and have given their own services to attend to such as needed medical aid on the works. May I not, from these facts, appeal to those men immediately interested in the speedy completion of these defences, to render us all the aid in their power, and that speedily? I would also appeal to the patriotic Irish and German laborers who are out of work, to give a few days of their idle time. Many laborers, directed by their owners to come to the works have failed to do so; or if they came, worked but a short time and quit while their owners thought them at work. For the future, I would suggest to those sending us laborers, with them to send a list of their names, and the time they design them to work. I can then, if they absent themselves, know why they do so. Richmond Whig, 7/2/1861

This is the first instance here in this column that we’ve documented and discussed slavery and the treatment of African Americans in Richmond. I plan to cover it much more extensively later this month, but it goes without saying that this was backbreaking and arduous labor. Often slaves were “loaned” by their owners and free blacks were impressed into service to work on the fortifications against their will.

It is perhaps fitting then, that in September 1864, it would be black Union troops that would first infiltrate those same fortifications, helping to shift Lee’s forces and later set the stage for the siege of Petersburg. Fourteen black soldiers would later each win a Medal of Honor for bravery in the battle over these fortifications.

In August 1861, the initial fortifications were nearly completed. The Richmond Whig wrote:

THE FORTIFICATIONS erected around the city are of the most complete and formidable character, and, in connection with the “masked batteries” and mines at various points, would render the march of a hostile army hitherward an undertaking of great peril. One in a hundred might survive to depict the “wiping out” which these extensive works would certainly accomplish. A few bastions are yet unfinished, and upon these a force of several hundred men are now engaged. Richmond Whig, 8/21/1861

While being described as almost complete in the above article, as stated earlier, these initial batteries and forts surrounding Richmond would vastly expand during the course of the war as the threat to the city increased. 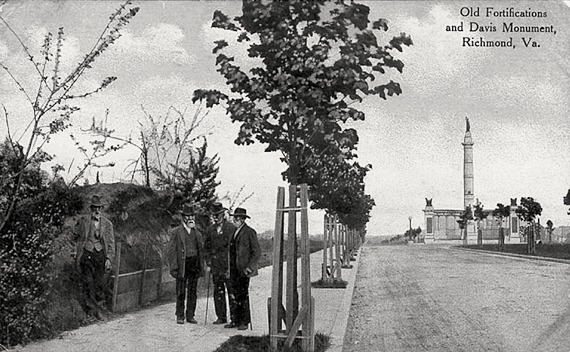 It’s a short and beautiful drive out of the city to see some of the original battery and fort locations mentioned above. The National Parks Service provides a fairly good map of the fort locations, and I’d suggest Fort Harrison and some of its neighbors as a good place to start. In the city proper, any evidence of fortifications has since been lost to development and growth of the city. However, in this late nineteenth century postcard (above), you can see Confederate veterans standing next to an old battery on Monument Avenue just yards away from the Jefferson Davis monument. With some guesswork, you could assume this battery was around where the Strawberry St. intersection is today (M.D. Gorman).

If Richmond hadn’t been so well fortified, the Civil War would have potentially ended much sooner. Many attempts on taking Richmond failed because assaults on these defensive positions were far too difficult and cost many lives, much to the frustration and chagrin of the several Union generals who tried.

Download a high resolution version of the map of Richmond’s defenses featured at the top of this post.