It may surprise you that the Confederacy actually had three capitals during the war. The first was in the heart of the deep South in Montgomery, Alabama, lasting only four months. The last capital of the Confederacy was Danville, Virginia — which lasted a whopping seven days. Richmond, obviously, held on to the title the longest.

Even people only marginally familiar with the Civil War know of Richmond’s designation as the capital of the Confederacy. What may surprise you is that the Confederacy actually had three capitals during the war. The first was in the heart of the deep South in Montgomery, Alabama, lasting only four months. The last capital of the Confederacy was Danville, Virginia just after the fall of Richmond in 1865. Danville’s designation as the capital lasted a whopping seven days. Richmond, obviously, held on to the title the longest. 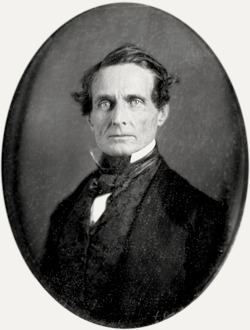 The initial establishment of the capital in Montgomery seemed to be born mostly out of convenience. When the first several states seceded, Alabama’s secession convention invited delegates of the other states to meet to form a government and constitution. Since that’s where everyone was located at the time, it seemed logical to place it there. In February of 1861, they selected Jefferson Davis as the president of the Confederacy. Davis was both a seasoned politician and a former soldier. He had served as the Secretary of War under President Franklin Pierce and had served multiple terms as a U.S. Senator.

Once Virginia seceded in April, talk soon began of relocating the capital to Richmond. A capital in Richmond presented advantages both tactical and symbolic. The first being represented most strongly in the Tredegar Iron Works, whose foundry produced nearly all the iron the Confederacy needed for artillery, weaponry, and armor. In addition, Richmond was a transportation hub with several railroads and the James River serving as ways in and out of the city. The symbolic reasoning was seen in the long line of Virginian founding fathers like Washington, Madison, and Jefferson, who were the revolutionaries who sought independence from Britain almost a century before–the leaders of the Confederacy enjoyed drawing comparisons to the War of Independence, feeling that their causes were similar and equally just. Without opining too much here, I think its safe to say that sentiment was more than a little misguided.

Howell Cobb, who was the president of Confederate Congress, had this to say about a capital in Richmond:

Her soil will, perhaps, be the battle ground of this struggle. Her enemies are gathered around her to force her into subjection to their foul dictates. We felt it was [Richmond’s] duty to be the seat of war. City Under Siege, Mike Wright

Truer words could not have been spoken. When the Confederate Congress voted to move the capital in late May, they essentially sentenced Virginia to be the most fought-over ground in the entire war. Richmond would be a city under constant siege; the number one target of the Union army.

President Jefferson Davis left Montgomery and arrived in Richmond on May 29th. According to the Museum of the Confederacy, Davis and his family “arrived to great fanfare, the ‘honor due to a new Washington.’ They were ensconced at the Spotswood Hotel on Main Street while the city acquired appropriate accommodations.” The city soon purchased a stately home “situated on a hill overlooking Shockoe Valley in Richmond’s historic Court End neighborhood” that would serve as the executive mansion of the president, known as the White House of the Confederacy.

Today, most of the area surrounding the White House of the Confederacy has been swallowed up by the Medical College of Virginia. Standing outside the front steps of the home, surrounded on all sides by tall imposing hospital buildings, it’s a little hard to imagine what it must have looked like back then. However, I highly recommend paying it a visit. Next to the house is the Museum of the Confederacy, which is definitely an awesome place to spend an afternoon looking through all the exhibits and artifacts. When you visit, you can buy a ticket that will get you dual admission to both the museum and the White House of the Confederacy.

Richmond’s designation as the capital of the Confederacy changed the city forever. Its pre-war population tripled in size as politicians, government workers, military officers, and anyone else who sought the favor of the new government descended upon Richmond.

This, of course, led to some pretty interesting stories that we’ll share here as the war continues to unfold.