Robert E. Lee is probably the most well-known and recognized Confederate general from the Civil War. On April 22nd, he made his first wartime appearance in Richmond. Here’s the story…

Robert E. Lee is probably the most well-known and recognized Confederate general from the Civil War. On April 22nd, he made his first wartime appearance in Richmond. Here’s the story…

Both tension and excitement were running high in Richmond in late April. Freshly seceded from the Union, it seemed just about anything could gather a crowd and send news buzzing throughout the city. One day before Robert E. Lee’s arrival in Richmond, April 21st, a rumor of a Federal gunboat ascending the James River sent troops (accompanied by thousands of citizens with their own firearms) rushing off to Rocketts Landing ready to defend the city. To the disappointment of the gathered throngs of soldiers and spectators, no federal gunboats ever arrived. (Richmond Dispatch 4/22/1861) 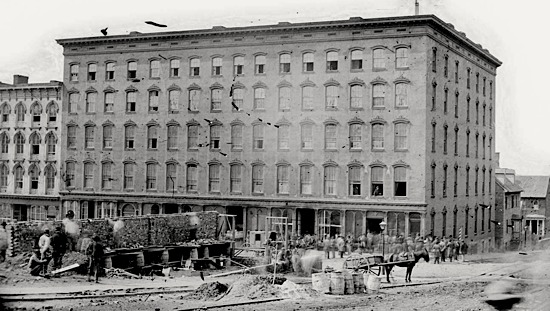 While it did not generate quite as large a crowd, a good-sized welcoming committee met Robert E. Lee’s arrival the following day. Before he even appeared at the Spotswood Hotel, an “immense crowd of citizens congregated anxious to pay their respects.” (Richmond Dispatch 4/23/1861) Robert E. Lee was in town, of course, to accept a position as commander of Virginia’s army and the crowd wanted to get a look at the man himself. So what were the circumstances that brought him to Richmond and, ultimately, the Confederacy?

Lee already had a strong reputation before the Civil War even began. His father was “Light Horse Harry” Lee, a Revolutionary War hero who served with George Washington. No pressure though, right? Regardless, Lee excelled at West Point and became a well-respected combat engineer and tactician, making a name for himself as an officer in the Mexican-American war.

In early 1861, things were about to change rapidly for Lee. In late March, the U.S. army promoted him to the rank of colonel, which he accepted, swearing an oath of loyalty to the United States despite the fact that Virginia was already in the throes of growing talk of secession. However, as the events in April changed rapidly, so did Lee’s circumstances.

Lee was in Arlington with family when he heard the news of Virginia’s secession from the Union. According to Elizabeth Brown Pryor:

Heartsick, he apparently dined that night with his brother Smith Lee and their first cousin Phillips Lee, both U.S. naval officers. The navy men joked about the conflict, waging mock battles at the table, but Robert remained miserable and mute. Phil Lee believed his cousin’s silence showed indecision, and hurried into the War Department the next morning, warning his superiors that they might lose him unless they acted quickly. One of Lincoln’s closest advisers, Francis Preston Blair, summoned Lee to his offices. Another message requested his presence at General Scott’s headquarters. Robert E. Lee’s “Severest Struggle” – Elizabeth Brown Pryor

The following day Lee met with Blair and Scott, both men offering the same thing – a position of Major General in the U.S. Army, commanding a force that would be responsible for putting a stop to the rebellion. Now that Virginia had seceded, his orders would include fighting against the rebellion in his home state. Following the meetings, Lee spent two long days in thought and prayer at his estate in Arlington, despairing over the decision he had to make. It’s a popular interpretation of history that his decision was somehow inevitable for Lee, but his letters and recollections from his family tell us otherwise. Lee was truly conflicted in his decision – to side with the country he loved or the state he called home? He was truly torn. Again, Elizabeth Brown Pryor elaborates about his probable mental state:

Part of Robert E. Lee’s dilemma was the clash between real and perceived obligations. He had sworn multiple times to maintain loyalty to the United States “against all enemies or opposers whatsoever.” Yet somehow he had the nagging sense that his first duty was to Virginia. It was a bond with place and patrimony; something perhaps more to do with the smell of lilacs in an old garden, or faces framed in candle shine, than with any patriotic credo. He told a friend he had been educated to believe his state should take precedence, but when his companion recalled the strong unionism of Lee’s father and brothers, asking “from whence was this education,” Lee only responded that he could not help feeling as he did.

In the end, Lee vowed “never again to draw my sword save in defense of my State”. Even though prior to his decision, he had been leery about the idea of secession in general, quoted as saying it was “nothing but revolution”, he cast his lot with the state of Virginia, tendering his resignation to the U.S. Army on April 20th.

With his decision made, a small delegation from Richmond arrived at his home in Arlington two days later and Lee began his trip south to the future Confederate capital, ending at the corner of Main and 8th Street, on the steps of the Spotswood Hotel.