Last week we had the first pet death in our family. As much as I complain about all my pets, it doesn’t mean that losing one was easy. I complain about my pets. A lot. I have tearful conversations with people about how much living with a dog and two cats in a shoebox-sized house frustrates me, and we have to have a lot of workarounds to make sure they don’t eat/destroy everything we own. I don’t know what it would take to convince me to get another pet in the event that we lost one. That doesn’t mean that losing one doesn’t hurt.

I got my cat Milhouse when I was 21 and she was about four months old. I was living in a tiny apartment with a friend. Milhouse was a stray cat from a recent litter that someone I knew had been keeping inside the house but needed to re-home. My friend and I named her Milhouse, after The Simpsons character, because I have a streak of having pets and children that everyone confuses as the opposite sex.1

Milhouse would hide under our couch, and when people sat down, she’d attack feet. She would get comfy on our necks and nuzzle our hair. She did something that a friend referred to as “making bread,” where she’d find a surface–usually your neck — and make kneading motions until she settled down and sucked on her paw while she clawed on someone’s skin. It was weird/adorable/painful. She especially loved my friends who also lived with her in the years after I got her, and my dad (Milhouse and I lived with my parents for about nine months at some point).

She became a skittish cat when I lived in an apartment that was broken into twice while we weren’t home. I had her for about seven years before I started to live with my now-husband and his cat. Milhouse passive-aggressively shared her pillow with my husband, then lived in hiding spots. Years later, after the introduction of a dog (Bunk) who loves to pounce on the housecats, and also a kid, Milhouse permanently resided on a cat bed in the laundry room. Only my dad ever sought her out when we had people over. If kids found her, I had to warn them that she might scratch (she would like to be pet for a minute, then she’d growl and swat). She was our anti-social cat, which suited me fine, as I always liked that she wasn’t in my face when I got home. She hung out when she wanted to.

Our daughter would come to her when she saw that I was holding or petting her. Milhouse scratched her only once. Milhouse mostly never warmed up to my husband, though on those rare times she was the only animal in the room, she would nuzzle up to him. I swear I saw that happen.

I felt bad for how isolated she was, and other than a daily pat when I was in the middle of taking care of other things, she and I didn’t have much quality time. I gave her tuna and chicken when I could. I tried to play with her if she seemed like she wanted to play. I did my best to protect her from being chased by the dog.

Right before Christmas, I shut out the other pets from the bedroom (our dog sleeps in our room at night) and she and I spent some time together and both fell asleep before the dog came back and she left. And in a few days, she was on our bed every day. She would often sleep there all night. It was then that my husband remarked on how small she was. Her spine was almost spiky. I shrugged it off as her being old. In hindsight, I had noticed how the cats weren’t going through food very quickly. I saw our other cat eating and drinking, but not Milhouse. When she slept on our bed I kept waking up because we were partially sitting on her, and I wasn’t sure she was breathing anymore. My husband kept urging me to take her in to the vet, and I eventually scheduled an appointment.

When I left for work on the morning that she died, she was sitting on the dog’s bed. That was very strange. Stranger still, Bunk didn’t bother her. When my husband called me a few hours later, saying that she let out a cry and collapsed and needed to see a vet, I remembered how when I was in labor, and a few weeks later suffering from something that would eventually send me to the emergency room, my normally excited and always jumping dog was very calm and sat next to me. The dog could sense something.

My husband took her to an animal hospital. Her heartbeat was too slow. She was dehydrated. She was so cold the technicians couldn’t take her temperature. They put her in warming blankets, but the diagnosis was that she had kidney failure from a chronic illness, and it was time to let her go.

I was in a meeting and I couldn’t leave work, but had my phone with me. I told my husband I trusted him to make the big decisions–and that I didn’t want to be called during the meeting unless I absolutely could do something because I didn’t want to cry in front of 10 strangers who were all staring at my computer screen projected on a wall. He texted me that he was going to let her go, and I had to sit straight faced for another 30 minutes. I was able to leave work to be there when she was euthanized. It’s hard not to feel embarrassed for doing something like crying so much you can’t talk when you are telling your boss you need to leave work although it’s just a cat, but anyone with pets understands that they are little family members and are worth a good cry.

By the time I get there, she was near motionless but awake. When it was done, they gave us a little clay print of her paw with her name stamped on it.2 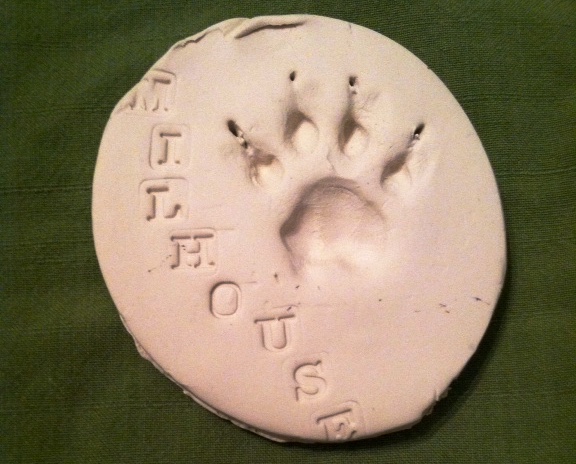 We waited until we were all together to tell our daughter. I started with “I have some bad news,”3 and then we told her. She asked a couple of questions, like if Milhouse was coming home and where was she now, then quietly went to put her shoes away. Then she ran out of her room crying, saying that she missed Milhouse. She cried a little throughout the night. For me, who always thought of Milhouse as “my cat,” it was reassuring to see how affected my husband and our daughter were, though it was a different kind of heartbreak seeing her cry because she was sad (as opposed to seeing her cry because she was asked to put something away).

My daughter has mentioned her daily (I overheard her saying “Poor Milhouse” repeatedly over the weekend). I had planned to write this week’s column about how my daughter is always talking about and asking questions about death,4 and now having an actual deal to deal with has amplified that curiosity. She’s been asking questions about what happens to people when they die, told us her stuffed dog was dying and we couldn’t save it, argued that she didn’t want to take a nap because, “I’m already dead,” and asked the much anticipated “What is Heaven?” question. This must be how she deals with it. And her stuffed dog who was dying on Friday night is actually doing better now.

Now we are a two-pet household, which is a normal number of pets. I am still sad about it, but she was an old cat and after a few days I’m getting used to not seeing her, and I’m trying to be kinder to the other cat. That leaves us with the dog (who I like to call “horse legs” because of the amount of noise she makes walking around), and Ely, our “party cat,” who is basically a cat-shaped puppy. I’ll miss my quiet, kind of jerky Milhouse, but I will remember her as the cat who grew up with me, and I’m glad she spent her last few weeks hanging out and watching Netflix with me, just like old times.