“We just want you to know that we absolutely love having JR in our class. He’s such a kind, caring little boy—a good friend to everyone. He’s also a bit…well…he can be…finicky.” Yeah, no duh. He strolled into the kitchen and found four small cans of shaving cream sitting on the counter, just in his line of vision.

“What are those?” he asked, giving them the side-eye.

“What’s it for?” He rested his nose on the counter and lined the cans up in a neat little row.

“To play with in the tub during your bath tonight.”

He pulled a face, unsure as to whether he should be appalled or excited. Or maybe both?

“…ok,” he eventually answered, and then wandered off into the living room to strap on his Spider-man sneakers.

We didn’t talk about it anymore for the rest of the morning—not as we finished getting ready for the day, not during the drive to school, not even as we walked to his class which is normally when we gab about our plans for what we’ll do when we’re reunited later in the day. I assumed it’d already slipped his mind.

“Ok, bud, I’ll see you this afternoon,” I said, leaning down to give him a kiss as he tucked Bunn in his cubby.

“And we’ll play with shaving cream?” he asked hopefully.

We waved goodbye, and I made my way down the hall…perhaps with a slight skip in my step.

Two days earlier, I sat in a room just down the hall from my son JR’s preschool class. Conference week was upon us, and it was my turn to spend some time chatting it up my son’s teachers about his strengths, his weaknesses, goals for the coming year—the various what-nots1 that make up the parent-teacher relationship.

“We just want you to know that we absolutely love having JR in our class.”

“Oh, well, he loves being in your class.”

“He’s such a kind, caring little boy—a good friend to everyone…”

I assumed guffawing, “Ha! Yeah, no shit!” wouldn’t have been the appropriate response, so I opted for a slow, knowing nod.

As with everyone, JR’s preferences and opinions don’t necessarily equal character flaws,2 but this particular tendency can present a challenge for the talented teachers attempting to guide our son through what should be some of his most gloriously gooey, exploration-rich years.

As a former educator I know if teachers make it a point to bring something up in a conference, usually they’re genuinely concerned—either because the issue is upsetting the dynamic of the classroom or they feel it’s negatively impacting your child. JR’s teachers assured me that, in his case, it was the latter; they were just worried that his “finickiness” could make him miss out on valuable, educational experiences. And, you know, fun.

So we made a plan.

Their part involved filling out a document outlining our agreed-upon goals for the upcoming year:

My part involved heading to the travel-sized toiletries section of Target and dropping four bones on shaving cream (at least to start).

There are certain situations that I’m willing to push and push hard on, hang-ups and personality quirks be damned. You know, those milestones and skills that have a major bearing on JR’s physical and social development and/or survival–like riding a bike; responding politely when people say hello; or not sinking like a stone when in the swimming pool.

However, in lower-stakes situations, I’m more inclined to take the “meet him where he’s at” approach and see how it goes. That’s where I was with JR’s failure to bliss-out over caking his hands in clay and other similar behavior. Should we work on it with him? Sure. Did we need to lose sleep over it? No. I knew we’d get where we needed to be; it just might take us a while to get there.

And we might have to start in the bathtub.

Shaving cream was the only topic of conversation on the car ride home from school that afternoon, a couple days after my meeting with JR’s teachers. It was all JR talked about as we played Candy Land and built space ships out of Legos that evening, and it was all he talked about all through dinner.

By the time JR was actually sitting in the bathtub, he was practically vibrating with excitement.

I started out by spraying a blob into my own hand first, just so he’d know what to expect. He laughed, but as soon as I asked him to hold out his hands, there was notable hesitation.

I immediately plunged my hand into the water.

“See, bud? It comes right off! If you feel like it’s too messy, just wash it off.”

“But sometimes soap gets into my eyes and it stings them.”

“Well, what could we do about that?”

He thought for a minute and then asked me to help him get out of the tub so he could “go get something.”

About a minute later, he reappeared in the bathroom wearing nothing but his birthday suit (as is typically worn during bath time) and…

A pair of swimming goggles.

Once he was settled back in the tub, he gingerly held out his hands. Before he had time to back out, I filled them with a healthy poof of shaving cream and handed the can over so he could try it himself.

He was not thrilled.

But once I took over spraying duties–and once he remembered he could wash his hands off whenever he wanted–he warmed up to things. Within a few minutes, he was having a grand old time. 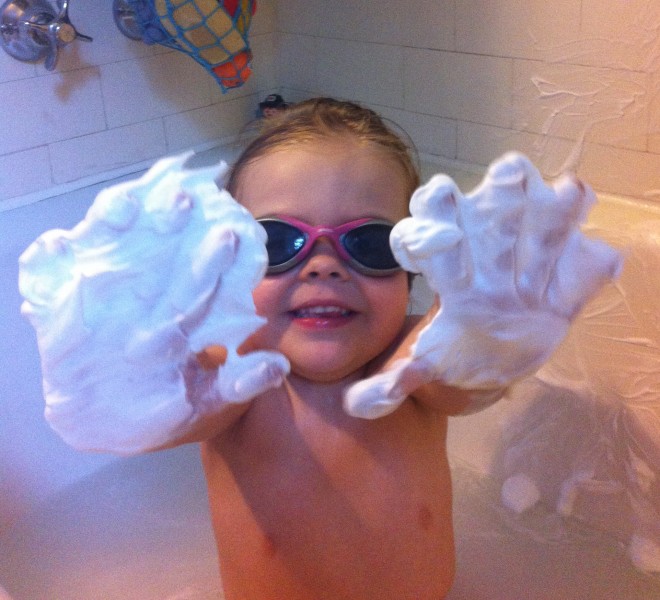 Especially when he realized he could slop up the walls without getting in trouble. 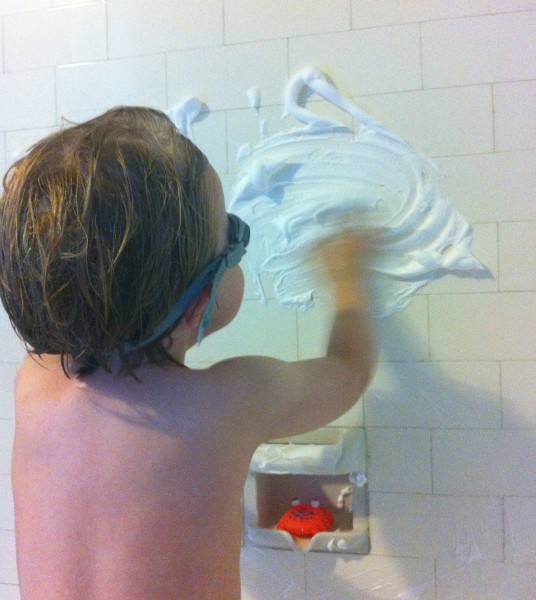 Eventually the goggles came off. He really got into it. 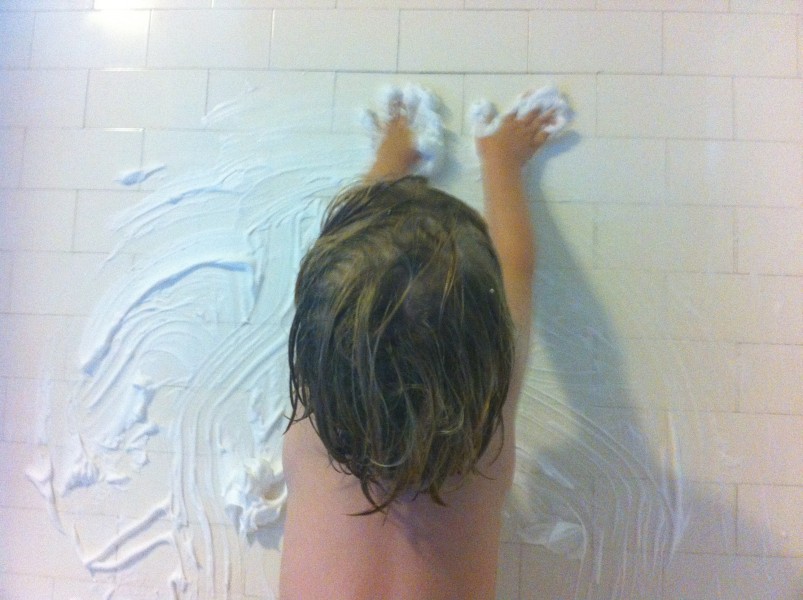 And he even got brave enough to pull the trigger himself.

JR played until all four cans of shaving cream were empty and the water had cooled to a temperature most would consider unacceptable for a child’s bath.

As I heaved him out of the tub and wrapped him up in a towel, JR took my face in his chilly little hands and said, “Mama. That was the most fun ever!”

So I didn’t mind so much that he left this for me to clean up when it was all said and done. 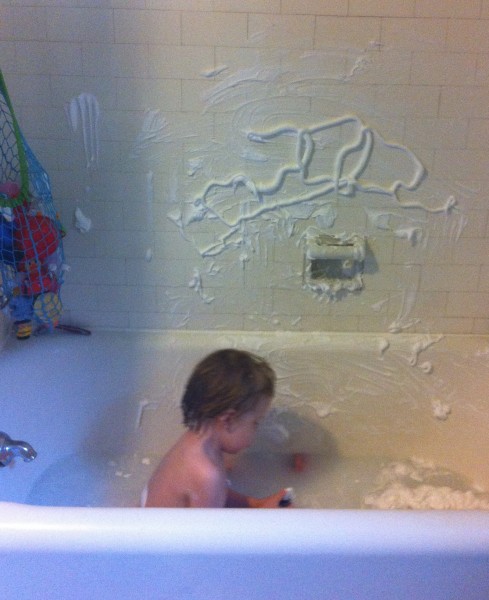 After that evening, every so often I’d offer JR a chance to play with shaving cream again—or suggest something similarly messy but manageable. Sometimes he’d take me up on it (always adding in his own twist so he’d have some sense of control4). Other times he’d refuse–with varying levels of shrieking.

I never pressured him because I didn’t want to make it an issue…but I started to wonder if my efforts to make him at least a bit more comfortable with experimenting and making messes were working. Maybe this was just going to be his “thing” and there wasn’t a damn thing we could do about it.

But then last week, I looked up from my computer and found him like this: 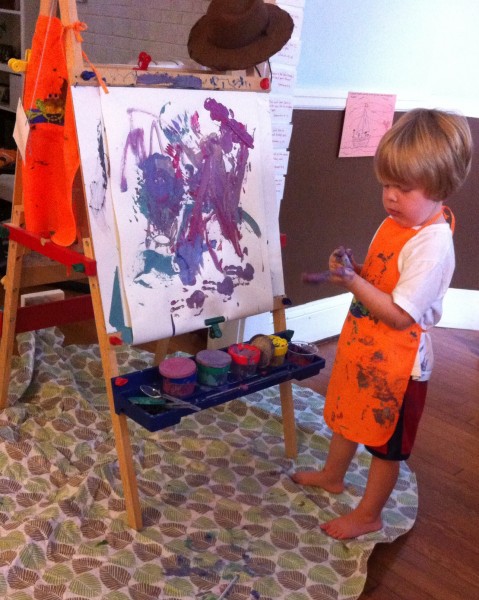 There he was. Covered in paint and voluntarily putting more directly on his skin, just to see what would happen.