My son JR never really had a “lovey” when he was tiny. All of his blankets and stuffed animals were interchangeable in his mind. In the rare event that an extra snuggle was needed (he’s just not a cuddler by nature), anything soft would do. But that all ended the day he notice Bunn.

My son JR never really had a “lovey” when he was tiny. All of his blankets and stuffed animals were interchangeable in his mind. In the event that an extra snuggle was needed, anything soft would do.

That all ended the day he noticed this guy: 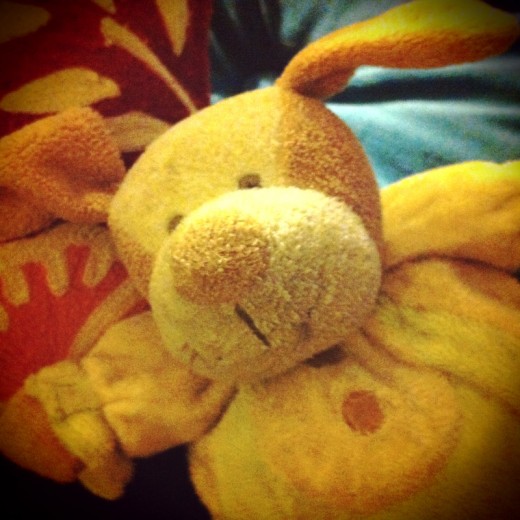 This is Bunn. He is a dog. He is NOT a bunny. I know what you’re thinking: he could be considered a bunny, what with the floppy ears and generally bouncy appearance. But no. He is a dog who just happens to have a name reminiscent of the word “bunny.” Don’t try to understand it; just accept it. My husband and I finally have.

Bunn is a large Beanie Baby-ish type… creature. He was part of a flower-balloon-combo that some dear friends brought to me when I was in the hospital after JR was born. Bunn served as the weight that kept the balloon from bopping all over my recovery room. More than likely, he was a $3 impulse buy made at the cash register.

Today? If I had to choose one object to save from our house in the event of a fire, it would probably be him–in the interest of preserving my own sanity at the very least.

The odd thing is, JR didn’t give Bunn a second glance until about a year ago. Up until then, he sat unnoticed in JR’s room, hanging out in one of the toy bins or piled up with the legions of stuffed animals on the bed. Then suddenly, out of the blue, Bunn (we still don’t know where the name came from) was going everywhere with JR: to school, to church, to the store, and (most importantly) to bed. He’s with JR for most meals and is given a prime seat during any and all book readings and movie viewings. I don’t know when, how, or why it happened, but Bunn is, quite simply, the love of JR’s life.

It’s funny because I always assumed that a child’s attachment to a blanket, stuffed animal, or the like, would lessen as he got older, but it’s been exactly the opposite for JR. The baby who couldn’t have cared less about which blanket he clutched in his chubby little fingers has become a kid who WEEPS in the rare event that his favorite guy hasn’t made it into the car. The most recent gnashing-of-teeth went a little something like this:

(And on and on until we turned the car around and went back home to save Bunn from his prison of soft blankets in JR’s bed.)

Sure, we live in constant fear that something will happen to Bunn. There have been a few heart-stopping moments when we thought he got dropped in the grocery store or left at the playground, never to be seen again. But I think JR needs him right now–and I do in a way, as well. Although the thought of my son growing up puts my heart in my throat, I think I’m a bit guilty of having tunnel vision when it comes to his development. I’m always super conscious of where he “should” be so he doesn’t end up falling behind one way or another. But when I look in the rear view mirror and see my child who is *this close* to outgrowing his car seat, cradling that filthy, thread-bare stuffed dog, I’m reminded of this odd place where he is right now: the tricky (and often heartbreaking) line between baby and boy. I’m reminded that he can be both–he should be both, as long as he can. And if Bunn needs to be along for the ride, then so be it. Even if it means I have to keep turning the car around to go get the damn thing.

Valerie Catrow is the former editor of RVANews who now spends her days raising her son, reading young adult fiction, and watching really bad television. When she’s not contributing to our parenting column or ranting and raving on her personal blog, Made in Richmond, you can probably find her abusing the caps lock key on Twitter.