Nestled at the base of the Blue Ridge Mountains, polo matches at King Family make for a dramatic spectacle, even if you don’t have a clue what’s going on. Upon arriving at King Family Vineyards for their weekly polo match, I was still a little self-conscious at the prospect of dragging my middle-crust self to such an utterly upper-crust spectacle. And then, like an angel from heaven, she appeared.

Stepping out of a rental coach, she set a Coors Light can upright on the gravel, crushed it beneath her flip-flop and then, like all my apprehensions, disappeared into thin air. Clearly this isn’t the rigid, old-money affair I had feared it would be.

Nor is it quite the shit show our Coors-crushing friend would lead you to believe. When it comes down to it, Roseland Polo at King Family Vineyards is a sporting event like any other–just another excuse to eat and drink in the open air with friends and loved ones. But boy does this setting put a Flying Squirrels game to shame.

Nestled at the base of the Blue Ridge Mountains, polo matches at King Family make for a dramatic spectacle, even if you don’t have a clue what’s going on. And I most certainly didn’t. But now, based on what I gleaned from the few moments I took the time to look up from my glass of King Family’s spectacular Viognier/Chardonnay blend, I can impart a few basics to enrich your experience.

A polo match consists of two competing teams made up of four players. Each match is an hour and a half long and broken up into seven-minute periods known as chukkers (I’m willing to bet that the girl in the parking lot had a seven minute chukker of her own later that day).

The object of the game is to move the ball, via a long-handled mallet, down the field and through the opponent’s goal posts. Whoever has the ball has the right of way. Defenders must respect the “line of the ball,” and encroach from the side and never head on. It all seems so polite compared to the sports I grew up on. 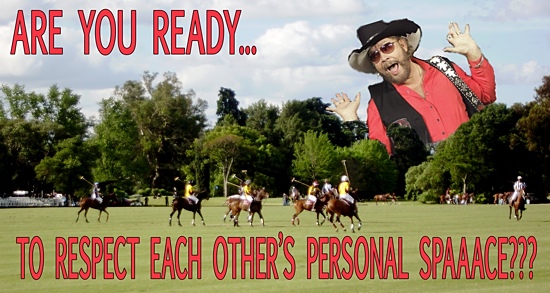 Most of the rules in polo are designed with the safety of both the horses and players in mind. Players are even required to change horses after each chukker, so no animal is over-exerted.

You know, it’s surprising this game hasn’t caught on more with the common man. The rules are simple, and all you need to play it is a ball, a mallet, and AT LEAST SIXTEEN HORSES.

While the above offers only the most basic (and slightly distracted) insight into the game, all you really need to know to enjoy Roseland Polo is that golf carts stocked with King Family wines circle the field at regular intervals.

That, and at halftime, you get to take the field and stomp the divots. Just seems like yard work to me but people seem to get a kick out of it for some reason.

Roseland Polo at King Family Vineyards is held every Sunday at 1:00 PM, from Memorial Day weekend to mid-October, weather permitting. Admission is free.

Guests are invited to bring their own food and drink BUT, because of ABC laws (and because only a jerk would go to a vineyard for free entertainment and not buy any wine), King Family wine is the only alcohol permitted on the premises. For more dos, don’ts and if you were smart you woulds, check out King Family’s tips for enjoying Roseland Polo.