David and Anne Shultz were decidedly unprepared for triplet daughters, but they were, by the time they got those babies home, unsurprised by their strikingly different personalities. An ultrasound scan is conducted with a startling quickness. Seemingly, the machine is turned on, belly jelly is applied, and images are immediately made available on a screen with the wave of a wand. If seen through the eyes of a professional, the images can even make sense. During the first of what would become many ultrasounds, the technician began tapping Anne’s leg. Anne asked, “Are there twins?”

The next 10 minutes were a rotation of the words “What?!” and “No way,” glances between each other and the monitor, hugs and kisses, and teary-eyed nervous laughter.

This was a year and a half ago, when Anne was nine weeks pregnant. During her first exam, Anne mentioned that twins run in both of our families, so an ultrasound was scheduled right away. Of course she wouldn’t actually be pregnant with twins, though. That would be crazy. Nonetheless, our first child is actually three children. Here we are, first-time parents who are uniquely positioned to learn from our mistakes on our oldest, middle, and youngest daughters at the exact same time. We must do our best to positively influence the lives of three whole humans who were born one minute apart from each other. Like all parents, we also must admire and humbly acknowledging that, to a great extent, our children were born who they are, and who they will always be. This has become increasingly interesting to be a part of, and to observe. We are one year into a long, exhausting, beautiful study of nature vs. nurture.

We were provided a significant (although highly not recommended) head-start on making our observations. The girls were born at 31 weeks and 4 days; about 48 hours after we heard our doctor say, “Emerson’s growth rate is abysmal. We’re going to have a birthday party soon.”

Anne was 31 weeks pregnant, and had spent the last two weeks in the Mother and Infant Care unit at VCU. She wasn’t on bedrest, but the girls needed to be watched more closely. Twice a day, a nurse was tasked with finding each of the girls’ heartbeats, sticking a heart rate monitor on the appropriate spot on Anne’s belly, and hoping the girls would stay still long enough to get a decent reading. Emerson, the smallest of our three, was the primary reason for concern.

To help the other nurses more easily find each of the three heartbeats, one nurse made a drawing of how the girls were positioned in the womb. Next to Emerson (Baby A) were the letters IUGR and AEDF. A quick Google search, and we better understood the level of concern and why exactly the girls were being so closely monitored.

Basically, Emerson wasn’t growing fast enough (even for a 31-week-old triplet), and the blood flow in her umbilical cord was on the verge of flowing in reverse. When the last ultrasound showed that Emerson wasn’t packing on the grams quickly enough, it was decided that her sisters would have to take one for the team and join us.

Before they were born, the girls were known as Baby A, Baby B, and Baby C. We knew that Babies A and B were identical twins, and that they were sharing a placenta. Baby C was their fraternal sister, and she was allowed to peacefully feast in her own separate suite towards Anne’s rib cage. Somehow Anne and I were able to get a feel for who was who, and assigned names very early on. Baby A was Emerson, Baby B was Leland, and Baby C was Frances. This helped us talk to each other about them, and allowed us to identify their differences even at this early stage. Leland was always dancing, Frances was always working on a craft project, and Emerson was making jokes and being feisty. Looking back, I suppose we don’t know for sure if Frances was working on craft projects, or if Emerson was making jokes. But Leland did kick all of the time, which we called dancing. 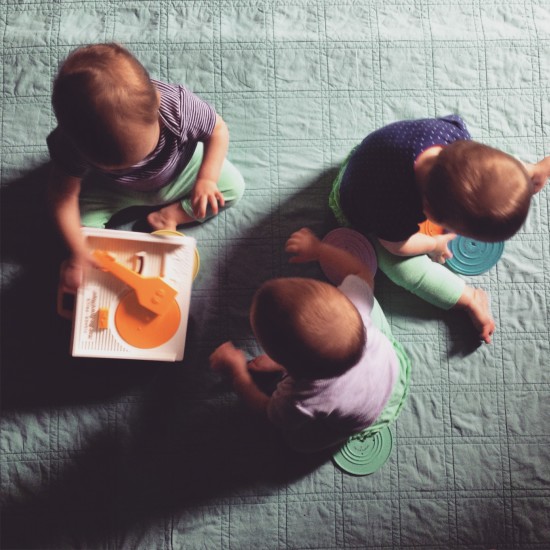 Leland is still the dancer. Of the three, she is easily the most responsive to music. She bobs her head as soon as she hears a song, and looks around to make sure everyone else is on board. Leland is a jolly little person, and pretty much always has been. In the early embryonic days, when she was simply known as Baby B, her food supply was never in question. Although she shared a placenta with Emerson, Leland had access to much more of it. She was born with more straws on her side of the milkshake. She had her identical twin sister right next to her, and plenty of food. She was well fed and living in a comfortable environment where she could kick her feet at all hours of the day. Now she is one of the happiest people I know. It can be difficult to distinguish between the narratives we tell ourselves and the narratives we are watching unfold, but it doesn’t seem like a huge stretch to say that the girls we know today are truly an extension of who they were as Babies A, B, and C.

Emerson, in contrast, was not well fed. Considering they are identical twins, she and her sister’s birth weights were strikingly different. Leland was born at 3 pound, 2 ounces, and Emerson was born at 1 pound 12 ounces. She was the first baby I held, and it felt like I was just holding the blankets she was wrapped in. Soon after she was born though, we knew we were dealing with a very strong person. All 28 ounces of her was ready to properly grow in the real world, and thanks to the many great doctors and nurses at VCU, she was given that chance. Even in the NICU, as she laid in her isolette with tubes and wires, there was always a look of wisdom and strength in her eyes. She provided a sense of comfort to us, because it was obvious that she knew she was getting out of there. Even today, she is a force. Of the three, she was the first to walk, she makes pretty ferocious growling sounds, and I just watched her put her full weight into taking back a toy from our dog’s mouth.

If Leland is dancing on the sunny side of Easy Street, and Emerson is strutting around with a toy she just yanked from a Weimaraner’s teeth, then Frances is most likely perched in the arms of a loving family member or quietly playing with some toys in her own world. Or bashing the little piano against the wall. Frances was on her own in the womb, and we get the impression that she didn’t mind it one bit. While Leland and Emerson shared a room, Frances had a room to herself during the NICU stay. This is a very Frances situation to be born into. She had the ideal primary nurse to look after her in the NICU, a woman who was exceedingly sweet and caring. And there were hair bows, lip gloss, and art projects involved.1 After 13 months, it seems quite likely that hair bows, lip gloss, and art projects will remain a part of her life. Frances is gentler and more sensitive than her sisters. She isn’t as likely to take a toy from someone else, and she is much more likely to shed enormous tears when someone takes a toy from her. She gets into laughing fits that are infectious, and although she loves pushing her bee-car around, her favorite method of travel is in someone’s arms. 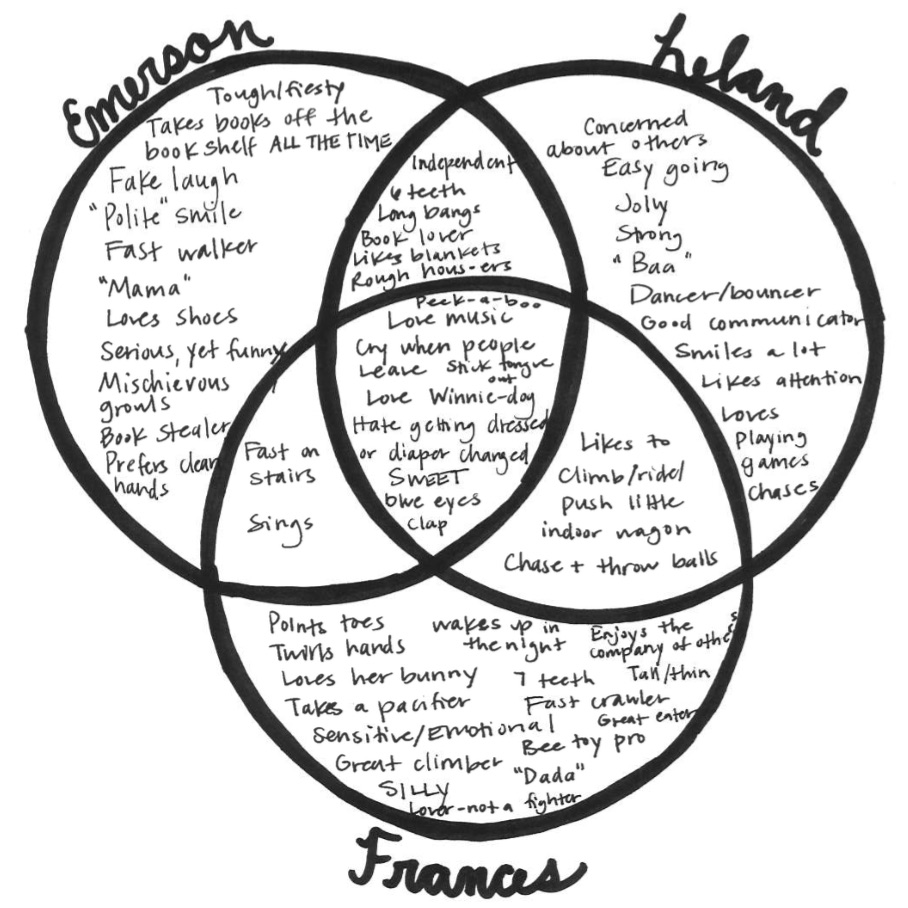 For your analysis, here is a Venn diagram created by Anne. (Click for a larger version)

Three girls were born within three minutes of each other to the same two parents. We are attempting to raise them the exact same way, and yet we are raising three very different people. This creates a very chicken and egg situation. Have the girls actually been influenced by some of the conditions they faced before they were even born? Or are we writing a story for them in a way that makes sense to us? Does Frances like pretty hair bows because her NICU nurse stuck them on her head when she weighed 3 pounds and lived in a plastic box? Or is that just her style. Is Leland super jolly because she has always had a buddy and plenty of food, even when she was little Baby B? Is Emerson a tough, fast learner as a result of surviving, despite being born under two pounds? We met our daughters two months early, and in many ways, the girls who we know now are still the same girls we knew in the NICU, and potentially earlier. We are very lucky, and it’s amazing to watch each of them grow in their own way.