My first wine dinner last weekend went well. Olio did it up as always, with five cozy tables and 30 people on their April 9 Indian cuisine dinner.

My first wine dinner last weekend went well. Olio did it up as always, with five cozy tables and 30 people on their April 9 Indian cuisine dinner. They had assigned us seating, taking care to keep people together who knew each other. The crowd was a good mix — fairly evenly split between male/female, singles/couples and older/younger. Several diners were familiar from my previous food blogger meetup there, including PJ Pink, who was seated next to me.

Carol Colby, sommelier by trade, and representative from Republic National, led us through our courses for the evening. She told us how challenging planning the night’s pairings with the Indian-inspired dishes had been. Most people drink beer with Indian food, she said, so the wine they found for us couldn’t be wishy-washy. A lot of trial and error was involved and they discovered mostly cold-climate wines worked best. Most of the wines served were 87 points or higher as ranked by several popular wine magazines.

Our first wine was from the furthest-north growing region in the world. A German Riesling, S.A Prum “Essence,” is grown on black slate to reflect heat back onto the vine to warm the grapes. The crispness and sweetness of the wine paired well with the smoky vegetables with Raita Yogurt dipping sauce, the flavors of which reminded me of tomato-cucumber salad.

Carol told us with Indian food, you don’t want heavy tannins and high alcohol because of the heat and spice in the food. It would be like pouring gasoline on a fire. 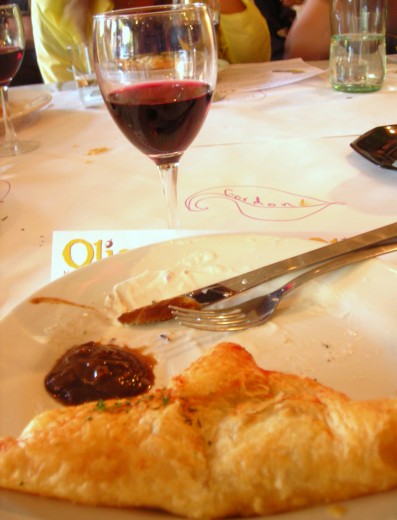 Our second course featured my favorite wine of the night, one I enjoyed so much I had to bring a bottle home. Made from a rarer Valdiguie grape, the J. Lohr Vineyards “Wildflower” from Monterey County, California, was soft and flowery on the tongue. The round and sweet flavors balanced out our spicy samosas with tamarind chutney in a flaky, puff-pastry crust.

Course three was popular at my table, the Chicken Tikka Masala, though it was my least favorite dish and least favorite wine pairing. The Enmeades Zinfandel had spice and oak flavors and didn’t match well. Fittingly, Carol told us was this course was the hardest to pair. The naan was the only part I really liked, which owner Jason Savedoff confided he bought from the Laxmi Palace on Broad Street. “It’s still authentic!” he exclaimed.

Dessert was last: green tea cheesecake with fortune cookie crust, the dish that sounded most creative to me and ended up being my vote for most successful pairing because it was so unexpected. The sparking Michele Chiarlo “Nivole” Moscato d’Asti wine was too sweet, very syrupy, and I would never have chosen to drink it on my own. Surprisingly, the mild, almost savory cheesecake really cut its sweetness, though my table agreed none of us could really taste much green tea. Happily, dessert did come with a fortune. Mine read “You will travel to many places.”

Olio’s Southeast inspired wine dinner met my travel need for now, though many of us agreed the 1/4 glass pours felt lacking. Luckily the hardworking staff and great conversation made a perfect Friday night out. I’m starting to feel like all I do is write about Olio, but when I find a place I like this much, I just can’t help but share. Owner Jason was even nice enough to wrap up some leftovers for the young women at my table who raved to him about one of the dishes.