Quasi legend, trumpeter and VCU Jazz Artist in Residence John D’earth has accomplished many great things in his life that, in his own words, all happened by accident.

Editor’s Note: In our Nine Lives series, we’ve featured saxophonist Jason Scott, pianist and songwriter Wells Hanley, and now trumpeter John D’earth. One of the best trumpeters around, the distinguished Charlottesville man has been spending a little more time in Richmond than usual. His temporary student Lucas Fritz tells his story.

John D’earth, trumpet player/performer/pedagogue, has returned to VCU as a Jazz Artist in Residence for the fall 2010 semester after leaving years ago for his main teaching gig at the University of Virginia in Charlottesville. A quasi legend, he has accomplished many great things in his life that, in his own words, all happened by accident.

D’earth grew up in a rural Massachusetts town listening to the jazz records his dad would play 24/7, and not just the Dorsey Brothers, as he puts it. His father had excellent taste in music. This early exposure to jazz started him on a life-long journey of exploration, delving into the unknown driven by his passion for the trumpet, but more importantly, his passion for music.

At age 14, his first accident happened: he got his first gig playing with an old-fashioned dance band. During that same year, he bought his first tuxedo, joined the union, and started the rest of his life. He has fond memories of playing what they would call “GB Gigs” or General Business gigs (today we call these society gigs). Playing in this band helped him hone his sight reading skills and technique.

As most people do after high school, D’earth enrolled in a university hoping to expand his mind and challenge himself. At the age of 19, accident number two: he dropped out of Harvard. Not satisfied with the lack of music during his education, he decided to take a leave of absence from Harvard and hitchhike around the country, exploring and playing his trumpet. A self-proclaimed “happiness addict,” D’earth found himself often playing and practicing trumpet, completely engulfed by the vast American wilderness. He gained a sense of fulfillment from being alone on his Jack Kerouac-esque adventure.

While going back and forth between Boston and New York City during his time at Harvard, D’earth would frequent his friend and future roommate Robert Jospe’s flat in the Village. He recalls people coming over to hang or jam quite often. One day, D’earth was hanging and in walked Michael Brecker. Later that day Dave Liebman stopped by and played some tunes. Seeing the two of them in the same day changed D’earth life forever. “I need to be here,” he recalls thinking to himself. From this moment on, D’earth devoted himself to living in New York. He moved in with Robert and never looked back.

Originally, D’earth decided he was only going to take “jazz” gigs in the city but quickly realized he wasn’t turning down non-jazz gigs, in fact he wasn’t getting any gigs! Quickly changing his mind, he joined the Larry Elgard Band, another GB sort of band, often traveling days to play for $25 a man. One of the best paying gigs D’earth played while in NYC was simply busking on the street. Having access to a station wagon with commercial license plates was very helpful, he remembers. They would pack up the gear, drive uptown, downtown, or wherever. Park, unload, and just play. Often, lunch-crowds pushing 200 people would gather in squares and parks to hear them play things like “Recorda Me” or other jazz standards.

D’earth recalls a third accident that helped propel him forward in music. Mike Lawrence (trumpet player on Joe Henderson’s Power To The People) auditioned the same day for Horace Silver’s band and got the gig. Because Lawrence had to go on the road, he gave D’earth his Latin gig with the band Sabor, exposing him to a completely different style of music and a whole new scene.

Although being in NYC was satisfying both musically and emotionally, anyone who has spent the summer months there knows it can get pretty steamy. D’earth, his future wife Dawn Thompson, Jospe, and some other friends decided they would spend the summer down south in the country. They found a farmhouse to rent in Greene County, Virginia, just for the summer. Everyone was very business minded when they arrived in Charlottesville, forming a band and a record label to support it. Most importantly, D’earth was playing and composing music.

He began playing for and with singer/songwriters. He recalls hearing Harry Edison play obligato behind Billie Holiday when he was a child in Massachusetts and tried to bring that into folk and pop music. At the end of the summer, D’earth and company had found some great things in Charlottesville and decided not to leave. He got the gig at Millers (a weekly Thursday night on the downtown mall) sometime in the late 80s, which sealed the deal.

The University of Virginia had a student run jazz performance program until D’earth came to town. A student run jazz band was preparing for a concert with the great trombonist Bob Brookmeyer. The music was difficult and “they were really in the weeds,” D’earth remembers. He offered his expertise to help prepare them for a performance with such a legend. The kids enjoyed working with him (as anyone who has ever worked with him does) and they gave him a job, offering to pay him whatever money they could scrounge up. Accident number four. Over time, the position grew and evolved until D’earth was the head of the jazz performance program paid through the school. 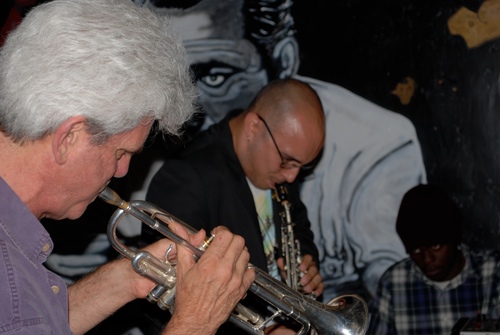 D’earth playing with Jason Arce and Devonne Harris at Bogart’s. Humphrey looks on.

John D’earth is not just a trumpet player. He is a musician. The trumpet just happens to be his instrument. Although inspired by nature (as his hitchhiking adventure proves), he feels he is even more inspired by people. He finds the way that people interact with each other, with him, and with themselves intriguing and inspiring. When asked why he often chooses to play with younger musicians (saxophonist Jason Arce, drummer Abinett Berhanu, and drummer/keyboardist Devonne Harris), he gives a simple response, “I like to play with good musicians. Often good musicians are young.” He recalls playing a tune one Thursday not too long ago at Millers that he had written in the early 80s. Although written before Richmond-native Harris was born, D’earth claims that it finally sounded right when he played it.

D’earth is a mindful, conscious, and very aware person. His kind heart translates not only in his day-to-day life but through his music as well. His soft spoken voice is an amazing contrast to the humongous sound that he projects whenever he plays trumpet. One gig stands out in his mind from his younger days of playing at weddings. It was an old fashioned Italian wedding and the bride had requested many old Italian folk songs. D’earth, thinking he was too cool for this, hated the thought of the gig until in the middle of one song, he looked up and saw “saw some old ladies crying their eyes out.” If his music touched those women so much, who else could he effect? He thought to himself, “This is what music is about.” He could never abandon it.

What’s next for him? “More practicing. More playing. More writing. More gigging.” But not even he knows for sure. Hopefully some other great accident will come along. But what we do know is that as long as he is physically, mentally, and emotionally able, John D’earth will be touching all of our lives with his soulful and moving music.

Hear John D’earth play every Thursday night at Millers in Charlottesville, VA, at 109 W. Main St., and the first Saturday of every month at Fellini’s #9 in Charlottesville. He is at The Camel in Richmond often, too. Find him wandering around the VCU campus on Mondays or Wednesdays and say hey.