When a national cable TV show films in Richmond, we flock. All it took was one tweet, then a re-tweet, and half of Richmond’s social media community super-users had descended on a little joint in the Devil’s Triangle called Caliente in the early afternoon of Wednesday, April 14.

When a national cable TV show films in Richmond, we flock. All it took was one tweet, then a re-tweet, and half of Richmond’s social media community super-users had descended on a little joint in the Devil’s Triangle called Caliente in the early afternoon of Wednesday, April 14. The Travel Channel’s Man v Food was in town. So much word got out that they had to close the doors at 4pm for the taping. Sadly, I was still at work, otherwise I would have been all over that, especially since the place is practically in my backyard.

Hey #RVA, if you go to Caliente RIGHT NOW, “Man vs. Food” is filming. I am looking at host Adam Richman.

Man v. Food is based around host Adam Richman’s travels to restaurants across the country for various crazy and difficult food challenges. Caliente’s was for their “stupid wings.” The menu advertises that anyone who can eat the whole plate of “the hottest wings you’ll never eat” gets them for free (a $15 value).

Richman arrived in the restaurant around 6pm for the challenge, but the taping went until almost midnight with lots of breaks in between. The actual challenge was only about 10 to 15 minutes long, says Kristel Poole, one of the audience members.

“It looked TOUGH. Adam seemed to have a very difficult time with it and I can tell you I will not be trying that challenge anytime soon. Afterward, he begged for a glass of milk, but they didn’t have any so he chugged a bottle of half and half,” reports Poole (@kristelpoole). 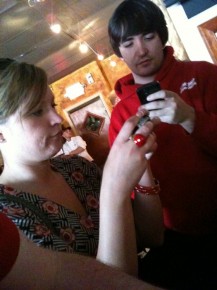 Other Twitter folks in attendance were @ChadBrownRVA, @laptopmnky, @MelRV and @lizsassymolassy, among an audience of about 40 others. All attendees were sworn to secrecy on the results of the challenge.

Man v. Food made a few other Richmond stops that week. I drove by Buzz and Ned’s on the Boulevard on Saturday and saw lights and camera people in the tent and figured it must be related. Turns out, it was them. The show also stopped by Black Sheep behind VCU on Marshall Street.

During the taping at Caliente, producer Dan Kornfeld asked Poole to record a couple of lines for the show. Afterward, a discussion about local karaoke resulted in a late night trip to Cous Cous (@couscous900) for drinks and karaoke with Poole and local karaoke enthusiast Chad Brown. Sound guy Eric sang “On a Boat” with Brown. Poole and Brown’s affinity for Cous Cous’s sister restaurant Sticky Rice (@verystickyrice) was enough to sway Kornfeld to join a group of Richmonders there the following Friday. Perhaps theses connections will lead to more opportunity for Richmond to be in the Travel Channel spotlight. The Richmond show is set to air on July 4.