Life at the Center of the Universe I stopped by Center of the Universe Brewing Company (COTU) on a rainy Tuesday night to find only two open seats at the bar in a tasting room full of people buzzing about an impending snow storm. I was there to meet Phil Ray, one third of the brewing triumvirate that comprises Richmond’s latest craft brewery. Officially opened for business on November 16th of 2012, COTU has steadily built a following of Ashland locals attracted by their delicious, frothy brews. COTU is located in the old Herald Progress Newspaper building in Ashland, about 15 miles North of downtown Richmond, and was started by brothers Chris Ray and Phil Ray, with Mike Killelea(formerly of Legend Brewing).

In 2009, the brothers Ray had very different lives than they do today: Chris was a professional baseball pitcher (who was on the San Francisco Giants’ roster when they won the World Series in 2010), and Phil was an Engineer working for Honeywell. But that would all change when Chris received a seemingly innocuous invitation from his friend to come over to try brewing beer for the first time. Chris was living on the West coast and called Phil late that night raving about how much fun he had brewing with his friend. He asked Phil a fateful question: “if I sent you a homebrew kit, would you use it?”

Phil put this homebrew kit to good use, with the brothers sending each other their creations across the country to sample. Flash forward a few years and they’ve opened their own production brewery on target to produce 1500 bbl of beer this year. In a serendipitous turn of events, they secured their brewhouse on July 1, 2012–the same day Virginia SB604 went into effect after making its way through the legislative process shepherded by none other than Mike Killelea, COTU’s future Brewer.

Phil said that the startup process has held several interesting challenges for them, but having an experienced veteran of the brewing industry like Mike on staff has allowed them to resolve any issues quickly or avert them altogether. In fact, much of the success they’ve had to date is due largely to Mike’s guidance. Schedules and plans are thrown out the window based on what the day brings, but the ability to adapt quickly has helped them survive the unpredictable first few months of production.The three brewers all have very high expectations and aspirations for their brewery, but they work hard to restrain themselves and keep growing at a sustainable pace rather than over-extend themselves. Balancing long term goals against short term goals helps to make sure their investment is a sound one that will endure.

I asked Phil about the effect of SB604 on their particular operation, and he said it has been instrumental in establishing a home market and solid fan base for their product. By selling their beer directly to their customers, the public is able to get to know the people that make their beer thereby fostering lasting personal connections between consumer and producer. In turn, the brewers get to see people’s reactions to what they are served, a great way to judge which recipes need more work. In addition to building the community of supporters needed for steady growth, the added revenue from the tap room is helpful to alleviate the high startup costs associate with starting a brewery of this scale. Prior to SB604, breweries were allowed only four ABCs licenses annually for hosting events; but now the brewhouse is no longer limited to being a single-use manufacturing building. Instead, breweries are attractions and venues for live music, charity events, and even cornhole tournaments.1

Their recipes currently on tap around town are a mix of homebrewing recipes from the Ray brothers and ones that Mike created in his years working in the industry. Each beer is proposed, piloted, and the three brewers sit down to taste it and decide if it meets their standards. The interaction between each of the brewers and honest feedback ensures that they are doing their best work and the highest quality product hits the market. This model of collaboration is something special and unique to COTU and should result in more interesting recipes and higher quality products across the board. 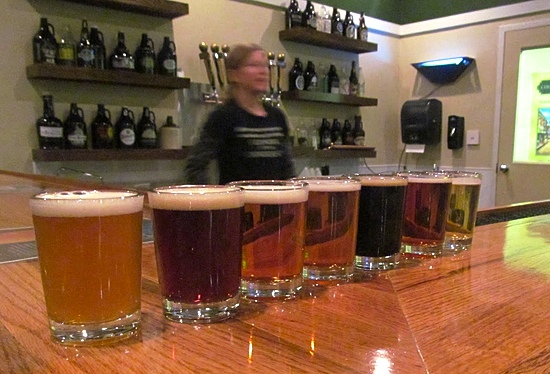 I had the pleasure of trying all of their beers on my visit and encourage you to try as many as you can when you visit.2 I asked Phil about his brewing philosophy, and he emphasized his desire to make well-balanced beers with high quality ingredients and stressed that the beer will always be the focus of their business. This was evident in the beers I tried, as they were all between 4-7% ABV and were a pleasant mix of hoppiness and maltiness.

Main St. Virginia Ale, RayRay’s Pale Ale, and Pocahoptas are all available year-round in bars and restaurants around town. Main St. Ale was their first collaborative brew–a German alt style beer with a strong malt backbone. RayRay’s Pale Ale is a recipe derived from the Ray brothers’ homebrewing days and is a balanced mix of malt and hops. Pocahoptas is their West Coast style IPA, the distinction being West Coast IPAs generally have more fruity and citrusy hop aroma produced by using a greater quantity of more expensive hops than a traditional IPA. The results are great, and Pocahoptus, in particular, left me with a strong sense that COTU will be well-received in Richmond. They also have several limited-release beers, like Plowed (their spiced winter seasonal) and Monkey’s Uncle (a Belgian Trippel brewed with lemongrass that was very refreshing).

Center of the Universe Brewing is built on a strong foundation of comradery, family, and ambition that will serve them well as they compete in the Richmond market. A short trip to make, but well worth the visit.