Governor McDonnell recently signed legislation that will help local craft breweries dispense their brews to the public and make things easier for new breweries to start their businesses. Gov. McDonnell recently signed two pieces of legislation that will make it easier for Virginia breweries to sell their beer on premises, offer samples to visitors, and minimize start-up costs.

Senate Bill 604 allows breweries to sell their own beer on premise and offer free samples to visitors. House Bill 359 allows, in part, for a licensed brewery to lease space in their brewhouses to new or smaller-scale breweries.

Eric McKay, co-founder of Hardywood Park Craft Brewery said, “Senate Bill 604 is a landmark bill for Virginia’s craft brewers and for its manufacturing industry at large.” He went on to say that the legislation will “create a substantial number of hospitality and manufacturing jobs, generate significantly greater sales tax revenues, increase tourism, attract new and expanding craft breweries to Virginia, support local agriculture, and enhance Virginia’s food and beverage culture.”

Brett Vassey, President and CEO of the Virginia Manufacturers Association added, “These bills represent a golden opportunity for economic development in the Commonwealth and we are incredibly proud of the burgeoning craft beer industry.” 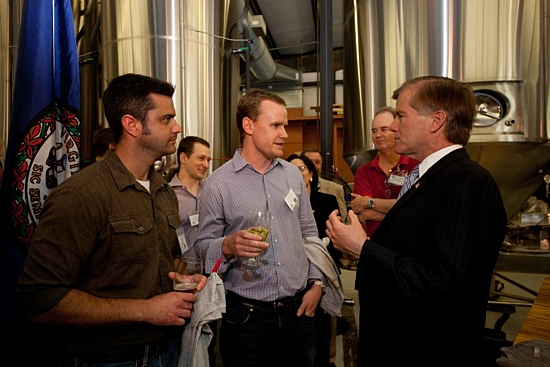 “This legislation positions Virginia’s craft brewers to grow and create more jobs in the Commonwealth,” said Gov. McDonnell. “From Arlington to Abingdon, entrepreneurial Virginians are innovating and brewing critically acclaimed beers. The legislation signed today will make it easier for our breweries to serve as destinations for potential customers and allow some of our talented small-scale brewers to lease space from established brewers and overcome some of the significant start-up costs.”