The Hunger Games: Catching Fire — Burn it down, burn it all down

The Hunger Games: Catching Fire is part two of one of the most important franchises of the 21st century thus far. And you better believe I’m going to tell you why! Suzanne Collins, author of the mega-popular The Hunger Games trilogy, has created the very monster she hoped to prevent: a nation full of people clambering over each other to get first look at a child-vs-child bloodbath. A huge moneymaker for real-world Hollywood just as the games are for the fictional-world Capital, The Hunger Games is supposed to be a cautionary tale. People get it,1 but the books are so well-written, the characters so developed, and the story so compelling, that it’s really difficult not to get caught up in Katniss Fever.

Let’s just cross our fingers that the message is still settling in just as it should.

A word about the plot, for those in the dark:

In the world of Panem (a futuristic North America), a despotic government has thrown its poor people into labor districts in order to provide the lucky rich ones in the Capital with everything they need. Once a year, these districts get a reminder of just how powerless they are when their children are made to battle to the death on national television in an event called (you guessed it) the Hunger Games. Because they’re hungry, guys. They have no food, water, or shelter, and only one can survive. Within the first installment, Katniss Everdeen (badass with bow, Jennifer Lawrence) and Peeta Mellark (sensitive soul with bread-making abilities, Josh Hutcherson) were plucked from impoverished District 12, restyled, trotted in front of the cameras, and generally made much of by the fabulosos of the Capital. Then, bon voyage! Into the games they go—only their clever trickery keeps them both alive by the end of the games.

So here we are. It’s a year later, and the president (Donald Sutherland) is pissed off at Katniss for being so great, as she’s inspired the districts to get a little feisty. He needs her to be super convincing about how much she fake-loves Peeta, so that they get that the Capital was being magnanimous by letting them both live (instead of outsmarted fair and square). It’s complicated, especially since Peeta actually DOES love Katniss a little bit, although both are in agreement that the horrific memories that wake them up screaming in the middle of the night leave no room for a lot of happy emotions. Then, guess what, the Capital ups the ante with a bigger, badder Hunger Games!

I can’t in good conscience go into more of the plot. Odds are, you know already, but just in case you’ve been untouched by HG’s greatness, I’ll leave it to you to find out.

The first film was great, as those with solid directors and a screenplay written by the book’s author often are. The physical violence wasn’t quite as shocking as it should have been—a purposeful move in order to get a PG-13 rating. That decision opened the floodgates for the tweens, who have all but claimed a franchise with way, way bleaker themes than the stuff they’re used to. Maybe that’s good, maybe that’s bad. Like I said, one can only hope that the gist of the thing has taken root deep within their tender little hearts.2

Catching Fire, however, is a different beast. While still not as violent as it could have been, the addition of storied adult actors instead of sometimes-awkward kids brings the whole thing to another level. That and a bigger budget that achieved more “realistic” versions of the challenging special effects requirements. Katniss, Peeta, Gale (Katniss’s sort-of boyfriend), Haymitch (their drunken, tortured coach), and even Effie (she’s the one who keeps saying that “May the odds be ever in your favor!”) are way more developed, as the film takes plenty of time to get to its climax. In true second-installment style, that climax brings with it about a billion unanswered questions that will infuriate you. But whoa Nelly, I bet you’ll be first in line to see the next one.3

As per usual, Katniss destroys all sorts of gender constructions: she saves dudes, she inspires a nation, she doesn’t have time to be romantic, and she never wants to talk about boys ever. Like, ever. In fact, if you bring up the Team Peeta vs. Team Gale debate to her, she will most likely just grab an arrow and plunge it directly into your jugular without even bothering with the bow.

Her dudes, similarly, are revolutionary in their own way. Each wanders around wearing his own special brand of lovesick, and they both do their part to attempt to protect her, only she’s always the one hauling them back to safety. The adorably diminutive Josh Hutcherson (Jennifer Lawrence’s real life BFF) has grown up a lot between films, speaking more volumes with his facial expressions than plenty of actors much older than his 21 years. In The Hunger Games, Peeta is starstruck and innocent—in Catching Fire, he’s got a lot more to lose. Liam Hemsworth’s Gale doesn’t have a whole lot to portray, besides anger, but he does it admirably, and rest assured, his day in the sun will come. WILL IT EVER.

So be encouraged, world, that this model of manhood not only anchors the plot of one of the biggest blockbusters ever, but that model is currently being adored by young women everywhere.4

Director Francis Lawrence will return in 2014, hopefully with the same sense of timing and poignancy, for Mockingjay, In the meantime, no judgements here if you find yourself watching this one again and again.

You’ve lost all faith in Hollywood and need to know that blockbusters can be worth your time.

Spandex weirds you out.

This movie, and indeed the whole series, could not be more firmly rooted in Bechdel Test success. 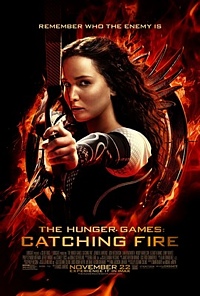