The Hunger Games: may cause mass weeping

This past Friday, nearly an hour before showtime, the line for The Hunger Games was several dozen people deep. Some of those people were wearing homemade puffy-paint adorned Hunger Games T-shirts. One of my things, and I have many things, is that I like to get to a theatre super early so I can pick out where I want to sit1 in a stress-free environment. Usually forty-five minutes does the trick; sometimes the theatre isn’t even ready at that point. This past Friday, nearly an hour before showtime, the line for The Hunger Games was several dozen people deep. Some of those people were wearing homemade puffy-paint adorned Hunger Games T-shirts. 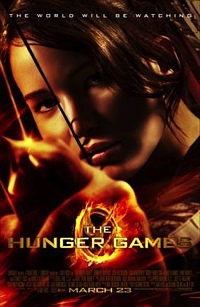 It wasn’t just fanatical teenagers who had queued up to see the most anticipated movie, thus far, of of the year. Like Twilight, and Harry Potter before that, The Hunger Games has inspired and excited people of every demographic.2 And thank goodness, because do we really want The Next Generation to be inspired by Bella and Edward?

In Twilight, Bella is continually the damsel in distress. She just can’t make up her mind whether she wants to date the thin, sparkly guy who has almost killed her several times, or the warm, ripply guy who has almost killed her several times. She makes bad life choices. Katniss from The Hunger Games, on the other hand, wears pants (a good life choice!).3 She’s the one that does the saving. And while she does have two boys vying for her attention, her priorities are: saving her family, friends, and the world.

But quality is the real difference between these two stories. Twilight (going back to the movies now) is poorly made and churned out to bring in the inevitable millions of dollars its fans will pay. The Hunger Games is actually a good movie that’s well made and brilliantly casted (Stanley Tucci!!!). Sure the movie pulled down the third best opening weekend ever (behind Harry Potter and the Deathly Hallows – Part 2 and The Dark Knight), but that’s not necessarily a function of quality. Twilight proved that: New Moon and Eclipse hold two of the top-five daily box office records. So yeah, I get pretty excited when I see a trillion teenagers, parents, and weird old dudes queued up an hour early to see a movie that is actually good.

And woo boy, I was not the only excited one in the theatre. The whole place was alive with EMOTIONS throughout the entire showing. It was great! I love catching a superpopular film on opening night and sharing an experience with my fellow man. There was laughing (at Gale, poor poor Gale), gasping (at Peeta), and sobbing (at everything else). On the latter: maybe this is something parents of teenage girls experience on the regular, but communal weeping was new for me. I imagine it’s challenging for teens to ingest (for the second time if they’ve read the book) something so emotional and well crafted, when their day-to-day state of being is basically “OH MY GOD WHY DO I FEEL THIS WAY.”

But there is something disturbing in all the sobbing (which my wife deemed one-upmanship among girls) and the Team Peeta / Team Gale shirts. Because…isn’t this kind of what The Hunger Games is trying to warn us about? The horror of kids murdering each other, glitzed up and covered over in the trappings of reality TV and manufactured story lines? Like, if you think the gist of the message is “will Katniss end up with Peeta or Gale” you just might be doing it wrong.

But I’m not going to get too caught up in that, because it’s simply great to see so many people so excited about something that is so good. There’s lots of culture out there to consume, and the vast majority of it is crap.

So The Hunger Games: it’s pretty good, turns out! The thing is brilliantly cast; everyone in it is incredible from Jennifer Lawrence, to Stanley Tucci, to Donald Sutherland, to Woody Harrelson, to LENNY KRAVITZ.4 And don’t forget Elizabeth Banks! I mean there are a ton of quality actors in this film. Kravitz and Tucci are especially wonderful and feel plucked from the pages as if the characters were written for them specifically.

What the movie does miss, however, is Katniss’s internal monologue. A significant portion of the book takes place inside of her mind as she works through her changing relationships with friends and enemies. How does that get translated to film? Usually poorly. But hey, when you’ve got the author of the book (Suzanne Collins) co-writing the screenplay, things tend to work out in your favor.5

Both Hunger Games virgins and diehard fans alike will be glad that ol’ Collins is at the writing helm. There are plenty of inside jokes (Buttercup the cat) and allusions to deeper parts of the story to keep even contributors to The Hunger Games Wiki satisfied. But Collins also does an excellent job of paring down a fairly complicated story into 142 minutes that anyone, even the two dozen people out there who haven’t read the book, can appreciate. But just know, if you haven’t read the book, there’s a lot you are missing.

You have named your firstborn Katniss Everdeen (regardless of gender). You’ve got a teen lying around the house somewhere and want to expose them to a good movie based on good intellectual property. You love cautionary tales about a dystopian future (who doesn’t!).

Do you get motion sickness? Director Gary Ross (Pleasantville, Seabiscuit) went a bit overboard with the reality-style jigglecam. It was enough to give me a headache, and I thought Cloverfield was sweet (but also headache inducing). Another great reason to skip this movie is if you haven’t read the book(s). It’s totally worth it and will take you all of two days, so find the nearest teenager, make them sob uncontrollably (should be easy), and filch that trilogy right out of their tiny grubby hands!