Local, and nationally-featured, artist behind the 2012 Folk Festival poster

Kelly Alder is a local artist whose work has appeared in The New Yorker, Wall Street Journal, and The New York Times. More recently, he’s turned his talents to designing the poster of this year’s Folk Festival. This weekend, artists from across the country and the world will perform at the 2012 Richmond Folk Festival. The festival’s artwork, however, will remain a local product, as one of RVA’s best illustrators has designed the poster that is the artistic face of this year’s festivities.

“It’s a local event that’s become very successful,” said Kelly Alder, 53, whose artwork has been featured in numerous national publications. “To be a part of that is really exciting.”

Alder moved to Richmond in 1978 to earn an art degree at VCU. In the early 1990s, after completing an MFA in illustration at the School of Visual Arts in New York City, Alder returned to RVA, where he’s lived since.

His work has been commissioned by The New Yorker, The Wall Street Journal, The New York Times, The Village Voice, and others. One of his first jobs in print media was with ThroTTle, an RVA-based alternative publication founded in 1981 that ran until 1999. Alder also oversees a T-shirt company called Popidiot. He’s now contributed to a growing catalog of local artwork publicizing the largest folk event in the US.

Since 2008,1 The Richmond Folk Festival has commissioned local artists to design each annual poster (see sidebar). “I’ve always thought, Man, I’d love to do one of those,” said Alder. As it so happened, organizers had him in mind.

“Kelly has been on our list for awhile,” said Stephen Lecky, Folk Festival manager, who extolled Alder’s “very distinctive style and look.” As a result, organizers gave the artist virtual carte blanche.

“They told me I could do whatever I wanted,” said Alder. There were, however, two conditions.

The first: the names of participating musicians had to be on the poster. “One of the biggest challenges was getting [all] those names to fit,” said Alder.

The other, was that organizers wanted the design to not feature instruments, an odd choice for an event that features an abundance of unique instruments from across the globe. The reason for not depicting instruments? Organizers wanted to deviate from the designs of the previous Folk Festival posters. Beyond those stipulations, Alder had free rein.

He began by reviewing the designs of previous years. “I wanted to have things on [this year’s] poster that were consistent with previous posters,” he said. One of the most apparent attributes in Alder’s design is the presence of the James River and the downtown skyline. 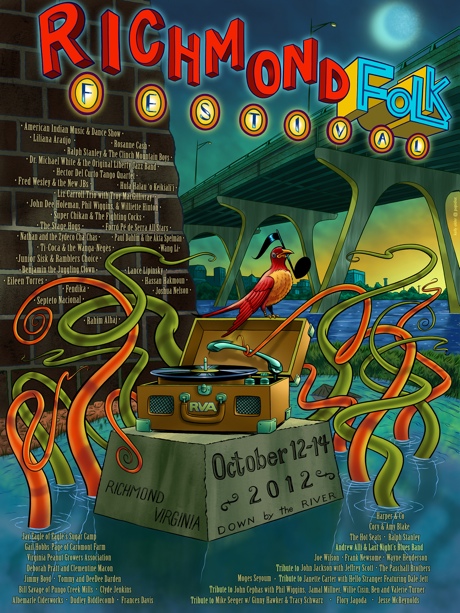 Alder’s poster also features the Belvedere Street Bridge and nearby stone abutments from a older bridge that stretched across the James. Affixed to the phonograph is the RVA logo, the first time the ubiquitous symbol has appeared on a festival poster.

The Folk Festival colors inspired the orange and green tentacles emerging out of the James. Each tentacle, said Alder, is a “surreal” design representing the roots of Folk music. Organizers are quite taken with the poster.

“We love it,” said Lecky, “What a great mix of futuristic details as well as having an old-school comic book vibe.” Alder said it was an honor to work on the poster, one that will be ogled by thousands of festival goers.

“It was certainly fun to do,” said Alder. “I hope people like it.”