Sticking it to Richmond: the origin and future of the “RVA” sticker

One of Richmond’s most iconic images continues to spring up around town: the RVA sticker has surprised even the creators with its popularity. How did the stickers come about, and how can you use them to extend your creativity?

Looking for RVA-branded gear? Click here to out our store: shop.rvanews.com »

There are a lot of bumper stickers out there. One in particular, however, sticks out more than most, and I’m sure you’ve seen it (you’ve probably seen it today). Not only do you find these stickers on car bumpers but also on rear windshields, backpacks, and even plastered all over bicycles. The letters are simple. The message, however, is far more comprehensive: RVA. 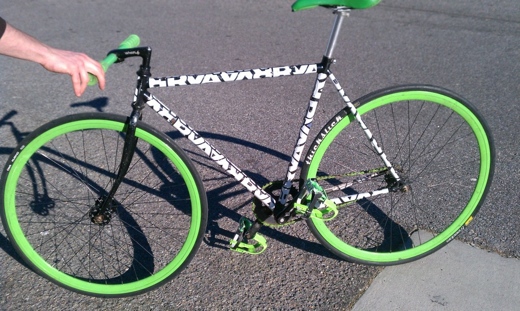 A bicycle “painted” in RVA stickers

These stickers are becoming more and more ubiquitous. Although just three letters, there’s a larger message behind them–one that all of Richmond is responsible for writing.

“Richmond has changed dramatically in the last twenty years,” said John Homs, owner of JHI, a creative services company located on Monument Avenue that specializes in branding, graphics, web design, among other things. Twenty-four years ago he moved to Richmond from New York City. He says that for years, many thought that Richmond was on the brink of becoming nationally recognized– the city that could. “Now we have become the city that can.”

Venture Richmond, an organization tasked with promoting the city’s downtown, wanted to move beyond the typical means of marketing and try a different approach. “We didn’t want it to be a logo and a tagline,” said Lucy Meade, Venture Richmond’s Director of Marketing and Development. “Logo and taglines don’t really work.”

She said that Venture Richmond turned to the Martin Agency and the  VCU Brandcenter, the award-winning, nationally-recognized advertising school in late 2009/early 2010. Students decided that the acronym RVA, which had already been in use by Richmonders, was a simple, catchy way to encapsulate the city as a whole. ‘RVA’ itself wasn’t enough, said Lucy. “The community has to be a part of it.” To help accomplish this, Venture Richmond collaborated with local businesses Elevation, The Hodges Partnership, West Cary Group, along with John Homs and the JHI team.

“We wanted it to be bottom-up,” said Homs. What he means is that for a successful branding initiative to work for a city, it can’t be foisted upon the people. It has to first simmer with them, gradually bubbling into a full boil.

JHI took the concept of RVA and decided that something simple like a sticker might be an effective way for Richmonders to brand the city themselves. “It needed to have the roots in the community,” said Homs. For the RVA sticker to be successful, however, it needed to go beyond being popular in the community. It needed what Homs calls the Popular Structure (i.e. the community), but also High-Level Structure (notable and large businesses), and the Political Structure (City Hall). It may surprise you that the latter of these came on board right away. “The Mayor completely embraced the idea. He said, Put it on everything.”

On February 3, 2011, the first printing of 5,000 RVA stickers arrived. “We had no idea how the demand for bumper stickers would develop,” said Lucy Meade. That question has since been answered. “It’s been insane.”

Where the RVA stickers are available

A total of 50,000 were printed and freely distributed in 2011, with close to half distributed during that year’s Folk Festival. A batch of 30,000 has already been printed this year. “It’s a powerful little identity,” said Homs of the sticker. “And that’s what we want.” Homs also sees the sticker representing more to people than a mere tool for decoration. He thinks it speaks to the city’s creativity. He speculates as to someone’s motivations for displaying the sticker: “It’s not a sticker, it’s my city’s flag. It’s my flag.”

One of the reasons for the sticker’s popularity is that it was designed for people to use in a variety of ways. The website RVA Creates allows people to upload images to be overlaid with the RVA typeface. “The logo is designed to facilitate that,” said Homs. “Use it. Do something with it,” he says to encourage people to embrace the RVA logo.

Lucy Meade said that “people were very intrigued by an open-source experiment.” She points out that NextMedia has a digital billboard on I-64 that displays the RVA logo, which they chose to do without direct advocacy by Venture Richmond. She also says that the phrase ‘RVA’ is used in common names (e.g. RVA on Ice, RVA Fireworks on the James, RVA Green, among others), and even in the URL of local business websites (Roosevelt, Balliceaux, the Mill, and others). “[We] never had any idea that it would be so popular.” She added that “It’s organically built this momentum…it’s become a source of pride. People are proud to be in Richmond.”

“It’s become accepted,” said John Homs.The challenge now, says Homs, is for Richmond to add to the brand, to further distinguish the city as an epicenter for creativity in the arts, business, education, and media. Embracing RVA is only half of the battle. “We can’t slow down,” said Homs. “Now we have to give it meaning.”

There are 54 reader comments. Read them.