EMTs, proposals, and cobbling: Behind the scenes of the Folk Fest

An artist host dishes on what we don’t see and how the festival has changed over the years. Last year, Kory Posey was buck dancing1 for students at Douglas Freeman High2 in his brand new white leather shoes when one of the soles broke off. As a performing artist at that year’s Richmond Folk Festival, Posey had an artist host, a festival volunteer assigned to wait on performers hand and foot during their stay. Posey’s host last year happened to be Tim Timberlake, who for each of the festival’s 10 years has been the coordinator–the head honcho of all artist hosts.

“These were his brand new, beautiful, expensive tap shoes he blew out,” Timberlake said by phone, recalling the story. Making things dire, Posey’s performance at the festival was the next day. “We had to go find him a shoe shop out there in the West End that was able to fix his shoe.”

Timberlake will tell you “little weird things like that happen.” That’s why artist hosts, the unsung heroes of the folk festival, must be “problem solvers who can figure out how to get something done if something comes up and it’s not by the book. They have to be able to figure things out,” Timberlake said.

On paper, the job of artist host seems simple enough. “Their main task is to meet the artist at the hotel…and be there in the lobby, make sure they’re down and all ready to go,” Timberlake said. You luck out if you’re assigned a single person. But if you’re stuck with a large group, say, the Mariachi Los Camperos de Nati Cano that have 15 members, herding them from the hotel to the venue and then back to the hotel, all while ensuring they’re fed and happy, is yeoman’s work.

“My amazing team is just adept at thinking on their feet and taking care of these people and making sure they have a great experience,” Timberlake said. “A lot of times it involves running to CVS or making a trip to the liquor store.”

But sometimes it means sleeping at MCV, as Timberlake did in 2011 for visiting blues singer “Big Time Sarah” Streeter. Streeter arrived in Richmond already in ill-health. “She was on oxygen when she was on stage,” Timberlake said. “EMTs had to come take her away, and my wife and I spent the night at the MCV emergency room with her getting taken care of.” Thankfully, she recovered. “She was able to do her performance the next day.” 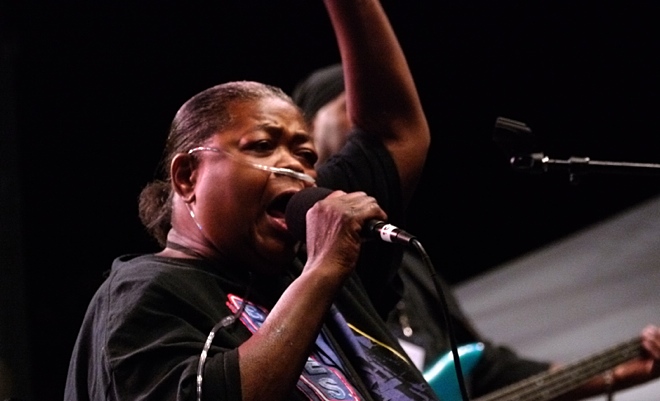 But host stories don’t always veer so close to tragedy. Several years ago, a West African performer genuinely proposed to his host. She politely declined.

Timberlake oversees roughly 50 artist hosts, most of whom have served since the first Folk Festival. “All of my folks have great stories to tell about experiences they have,” he said.

Like their stories, the artist hosts remain hidden away from the audience. “It’s a great behind-the-scenes effort that the public doesn’t see, but we hope they see the results as a really nice, smooth-running festival that when you show up to see someone on the schedule for 1:00 PM at the Altria Stage, they’re going to be there.”

The biggest change Timberlake’s seen over the festival’s decade run hasn’t been the music. “We’ve always had a real wide array of musical genres. So the kind of music we’ve presented hasn’t changed that much,” Timberlake said. “But what has changed is the number of people who have figured [the festival] out.”

Figuring it out means Richmonders realize folk music is an “indigenous art form that comes from the tradition of communities and cultures. It’s not just Peter, Paul, and Mary necessarily,” Timberlake said. “That’s why our crowds have grown in number and complexion. It’s fantastic to see how well the diversity of our population–Asian, Hispanic, African-American, all of it–how much of that is reflected in the crowd.”

That crowd will gather again this weekend to celebrate the festival’s 10th year. “It’s just been a really wonderful thing to see, how much Richmond appreciates this event now and what a good thing it is for our community,” Timberlake said. And by weekend’s end, you can bet he and the other artist hosts will have a few more stories to tell.