A home brew hobby has earned owners statewide medals while giving RVA a little flavor of the West Coast. Adam Worcester’s wife unknowingly planted the seed (or rather, the hop)1 that grew into Triple Crossing Brewery. A gift from her led to the humble brewery that, after having been open just four months, had three beers ranked among Virginia’s best despite its brewmaster having no experience beyond home brewing. Now Triple Crossing produces some of Richmond’s unique, best beers.

It all started when Worcester’s wife gave her husband a home brewing kit.

“When I first started home brewing, I had no idea what I was doing,” Worcester said last week. So he phoned his friend Jeremy Wirtes, a home brew hobbyist raised by home brewers. “We started brewing together and–like all home brewers I’m sure have done at some point in time–we talked about opening a place and how cool it would be.”

Unlike most home brewers who only entertain the thought of starting their own brewery, Worcester and Wirtes really thought about it. A lot.

Worcester pitched the idea to childhood friend Scott Jones. “He spurred us into putting a business plan together, going out and seeking investors, and starting the business up,” Worcester said. In October 2012, the three met at Sedona Taphouse in Midlothian, the first time Wirtes and Jones met one another, to hash out a brewery. “Within a week we had a preliminary business plan put together and were full steam ahead.”

In fall 2012, Richmond’s craft beer scene was more or less limited to Legend, Hardywood, Strangeways, and Midnight. “We just thought it’d be awesome to be a part of that, and we also thought we could bring a different mix to it than what was going on,” Worcester said. Legend (“great traditional style beers”), Hardywood (“a lot of Belgian style beers), and others had their own niche.

But Richmond wasn’t producing the beer the trio loved. “We thought we could bring the West Coast style of super hoppy beers…here to Richmond, [which] wasn’t really around at the time.”

For decades, West Coast breweries2 employed regional hops that differed from their East Coach counterparts. “They have so many more hop varieties that are so much more flavorful,” Worcester said. “They made these beers that were super dry, there was no malty, sweet backbone taste to it, but they loaded it up with hops and got all the citrus flavor and aroma from the beer.” 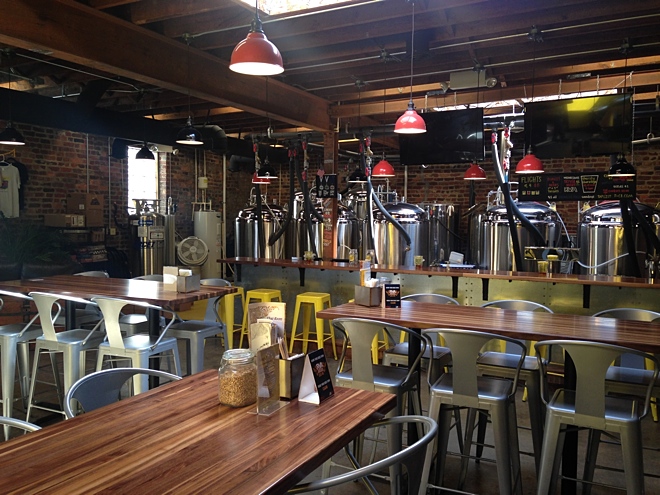 The three purchased downtown property at 113 S. Foushee Street in June 2013 and built out until March 2014. They paid roughly $180,000 for a seven-barrel brewing system, a relatively smaller production yield when compared to Ardent’s 15-barrel system and Hardywood’s 20-barrel system. “Because we’re so small and scale, it’s very much like a home brew set up, just slightly bigger,” Worcester said. Start “on a small system that we could be super flexible with and see how that went” before investing more money.

The name Triple Crossing references Richmond’s unique claim to railway fame as the only place where three different rail tracks at different heights converge at one point. But the name has a more personal connotation. “It was more about being unique to Richmond just like the triple crossing itself is, but also the fact that three of us got together and started the business,” Worcester. Triple Crossing opened in April 2014.

With his home brewing experience (and having been raised by home brewers), Jeremy Wirtes was far and away the most qualified of the three to become brewmaster. But even he had no professional experience.

The trust Wirtes’s partners had in their friends paid off in August when 51 state craft breweries competed in 22 categories in the 2014 Virginia Craft Brewers Cup. Of the 13 Richmond breweries included, only eight medaled, and Triple Crossing won three medals, the most of any local brewery.

“It’s pretty incredible to go from being a home brewer just eight months ago to being a professional brewer and winning statewide recognition,” Worcester said about Wirtes’s efforts and talent. “The thing to me that was so cool about it was that Jeremy didn’t have professional experience before this. He home brewed. And he is such a perfectionist, and he’s so dedicated to making the best beer that he possibly can with our set up here, that he dedicated a lot of his time–even when he’s not here–to doing research on the internet and talking to other people in the industry.”

Medals aren’t the only thing that distinguishes Triple Crossing. While most breweries serve their beer from kegs, Triple Crossing serves directly from their tanks. “The idea with this place is we have five tanks that we serve directly out of. We don’t keg anything off except to send out to market. So to always have a rotating selection of five different beers in there…was our plan when we first launched,” Worcester said. “There’s no fresher beer than beer served directly from tanks like this,” Worcester said.

Early customer favorites so far include the Falcon Smash (their first ever IPA) and Element 79 (a golden ale), which Triple Crossing tries to stock regularly. “But everything else we rotate through pretty steadily and have different options on pretty constantly,” Worcester said. Variety keeps the brewery in line with the “home brew spirit”3 of trying new recipes, even those beyond one’s comfort zone.

Triple Crossing’s incursion into the territory of beer’s Big Three is small at the moment; their beer’s only available at the brewery and select restaurants around town.4 “We obviously would love to be more heavily distributed, but because of our size, it’s just not realistic right now,” Worcester said.

But small distribution doesn’t stymie Triple Crossing’s home brew spirit. On Halloween, the brewery will release an Imperial Red ale5 as part of an event partnership with the Poe Museum.

Attention and accolades are all fine and good, but it seems Worcester’s favorite part of Triple Crossing is owning it with his friends. “To grab a growler of beer and take it home and drink it and say this beer was beer we dreamed about making for so many years and now here it is, commercially made and sold,” Worcester said. “It’s a really good feeling. There’s nothing quite like it.”