Color me surprised when The Biebs showed up on the cover of the Rolling Stone, looking decidedly un-Bieber and, in the interview featured inside, saying things that were definitely un-Tiger Beat. 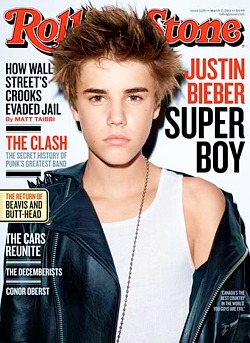 The cover of the March 2011 issue of Rolling Stone shows a sort of grownup-looking Justin Bieber. His notorious mop-top is spiked into a bad boy bed head; his teen dreamy eyes are serious and brooding; his full, pouty lips are fixed into a near-scowl; he sports a black leather motorcycle jacket, slipped off to reveal one skinny shoulder, and a white wife beater tank top. This is not the huggable, non-threatening Biebs you know and love. This is the new, rebellious, version of the pop sensation and he’s totally in your face. Within reason.

For you pop culture cave dwellers, Justin Bieber is a 16-year-old Canadian pop singer who was discovered on YouTube and quickly signed by R&B star, Usher. His debut album, released just over a year ago, went platinum and he became the first artist to have seven songs from a debut album chart on the Billboard Hot 100. Just this year, he won Artist of the Year at the American Music Awards, was nominated for two Grammys, and was the musical guest on Saturday Night Live, as well as headlined a world tour and released a 3D biopic-concert film. Basically, this kid is hot potatoes and you’d better be wearing oven mitts, or you’re gonna get burned.

So, color me surprised when he showed up on the cover of the Rolling Stone, looking decidedly un-Bieber and, in the interview featured inside, saying things that were definitely un-Tiger Beat.

It seems that Bieber took Rolling Stone contributing editor Vanessa Grigoriadis for a ride around Atlanta in his Range Rover, and they just rapped, like young people do, about young people topics. Away from his stable of handlers (no joke, the kid has a “swagger coach”), he had no choice but to answer honestly, to the best of the ability of a young man whose real world is absolutely nothing like the one most of us know.

They talked about politics:

He isn’t sure what political party he’d support if he was old enough to vote. “I’m not sure about the parties,” Bieber says. “But whatever they have in Korea, that’s bad.”

“You guys are evil,” he jokes. “Canada’s the best country in the world.” He adds, “We go to the doctor and we don’t need to worry about paying him, but here, your whole life, you’re broke because of medical bills. My bodyguard’s baby was premature, and now he has to pay for it. In Canada, if your baby’s premature, he stays in the hospital as long as he needs to, and then you go home.”

They talked about premarital sex:

“I don’t think you should have sex with anyone unless you love them,” Bieber says. When asked if he believes in abstinence until marriage, Bieber – who is reportedly dating fellow teen star Selena Gomez – seems wary: “I think you should just wait for the person you’re…in love with.”

They talked about abortion:

“I really don’t believe in abortion,” Bieber says. “It’s like killing a baby.” How about in cases of rape? “Um. Well, I think that’s really sad, but everything happens for a reason. I don’t know how that would be a reason. I guess I haven’t been in that position, so I wouldn’t be able to judge that.”

Haven’t you always wondered where Justin Bieber stands on abortion? Me, neither!

Now, the bubble gum baby face has made no secret of his Christian faith from the very beginning. In fact, in an article about his movie,

Scooter Braun, Bieber’s manager and one of the film’s producers, said, “People will walk away (from the movie) knowing faith is very important to him. As a Christian, he’s someone to look up to. When (fans) are getting the real person is when they can connect to that person.” Sure, if you’re another Christian. Teens of other faiths, get your own idol!

Bieber told Rolling Stone, “I feel I have an obligation to plant little seeds with my fans. I’m not going to tell them, ‘You need Jesus,’ but I will say at the end of my show, ‘God loves you.”

All well and good when it comes to aborting babies, but I’m pretty sure the Bible is pretty clear about sex before marriage being a no-go, whether or not you “wait for the person you’re…in love with.” Somebody get this kid a King James Version!

So, the world’s biggest teen idol worships the world’s first teen idol, is that such a big deal? At his age, I was pretty sure I was a Wiccan, and practiced spells like I was waiting for my messenger owl to arrive from Hogwarts. I think the bigger problem is Rolling Stone magazine daring to ask such potentially damaging questions of someone who, at 16, is still developing his opinions, likely at a slower rate than the rest of us due to being completely isolated from the experiences that it takes to form them. Let’s face it, Rolling Stone, any way Justin Bieber answered those questions (holy cow, just think of the uproar had he expressed support for a woman’s right to choose) guaranteed controversy, resulting in money in the bank for you. That’s a pretty underhanded way to sell magazines.

I think that maybe Justin Bieber should stick to singing poppy love songs to throngs of screaming girls and Rolling Stone should stick to writing about music. Me, I’m going to stick to staring at that magazine cover while perfecting my “Make Him 20-Years-Older” spell. Oh, and you don’t have to worry about me, JB, I’m barren.