From the Millennium Stage at the Kennedy Center to Subterranean A, last Wednesday night was a night of opposites. In an event advertised as “North meets South”, Darcy James Argue’s Secret Society from Brooklyn and Richmond’s Fight the Big Bull did just that.

From the Millennium Stage at the Kennedy Center to Subterranean A (a basement apartment on R street in Washington D.C.), last Wednesday night was a night of opposites. In an event advertised as “North meets South”, Darcy James Argue’s Secret Society from Brooklyn and Richmond’s Fight the Big Bull did just that.

The evening began at the Kennedy Center’s Millennium Stage where free concerts happen 365 days a year. The place was standing room only when the 18-person big band took the stage. Armed with a fleet of instruments, the band embarked on a journey through four complex tunes that lasted a little more than an hour total. The highlight of the set was the tune “Phobos” that featured electric cajon with a heavy delay playing break beats that morphed into more of a heavy alternative rock groove with electric bass.

Argue’s greatest talent is his ability to create so many textures with a big band. Many compositions they performed used baritone saxophone, bass clarinet and bass trombone to create a heavy bottom groove while trumpets, clarinets and flutes created a complex and often mutli-metered interplay on top. Seconds later, 13 horns were holding a unison note for two minutes as a flugelhorn solo used every chromatic note to build tension. Immediately after the set, the migration began as the second event at Subterranean A was in only 90 minutes. 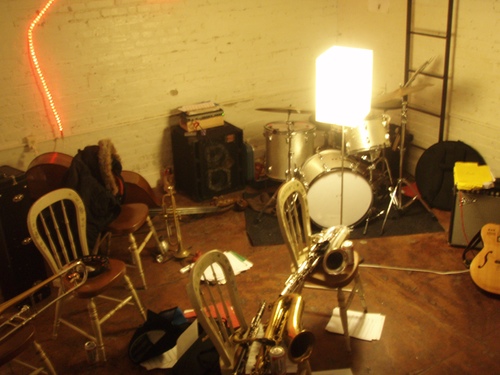 Holding a concert in a basement apartment could seem underwhelming, especially after the grand Kennedy Center, but jazz needs more places like Subterranean A. The future generation of jazz listeners certainly feels more comfortable in this environment and it even seemed to put the bands in a state of comfort. Search and Restore founder Adam Schatz embodies this belief and booking shows in venues where younger listeners feel comfortable is one of the missions of his project.

This was night one of two. The second night on Thursday took place in Brooklyn with Fight the Big Bull, Darcy James Argue’s Secret Society and Steven Bernstein’s Millennial Territory Orchestra. Wednesday signified the first Search and Restore event in Washington D.C. while Thursday celebrated Search and Restore’s successful $75,000 fundraiser for an online film project.

At Subterranean A, Fight the Big Bull performed first. Without notice, saxophonist John Lilley began playing solo as an intro to his regular feature “The Sacred Harp.” Cameron Ralston joined in on bass. The horn section played cued horn lines as the saxophone built intensity. With a silent focus, the audience didn’t miss a note. At the end the room erupted as Lilley took his seat and a large number of first time Fight the Big Bull listeners smiled, looked at their neighbors, and awaited eagerly for the rest of the set. 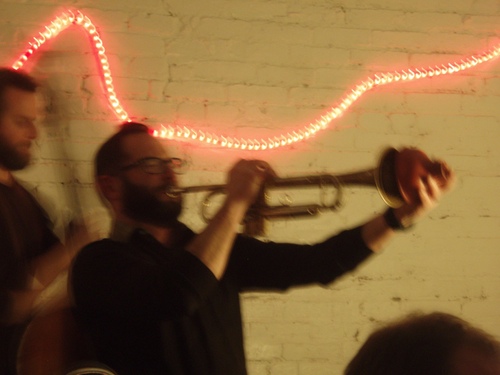 The highlight of the entire night came on the tune “All is Gladness in the Kingdom.” Ralston started the tune with a soulful solo that really proved that the Big Bull cares about one thing: playing with personality. Then Jason Scott brought the blues on tenor saxophone as the two played as a duo. The silent focused demeanor of the crowd broke as people began hooting and hollering. They masterfully built intensity until the entire band came in with the funky theme of the tune. As Fight the Big Bull busted into one of their signature dance beats, the audience began to dance.

An hour that seemed way too short ended and as the listeners relished in the experience they just had, no one had any doubt that Fight the Big Bull brought their “A game” on Wednesday and people were left wanting more.

Darcy James Argue and his 18-person band squeezed onto the stage and began playing their second set of the night. Whether they were inspired by the sounds of the South or the venue, the band had a more appealing rugged sound. This time they played tunes that featured more back-beats, fewer odd meters and even some people got the opportunity to dance. After almost 90 minutes of playing the band only repeated one tune from the earlier set. 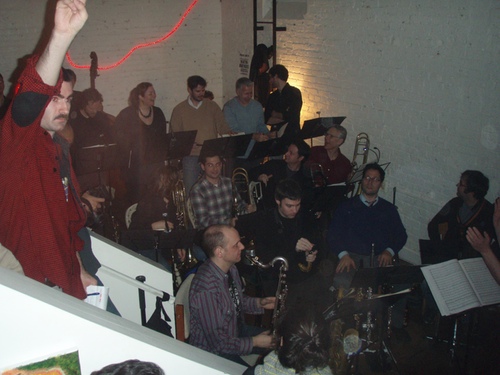 Fight the Big Bull and Darcy James Argue’s Secret Society are undoubtedly two of the best big/bigger bands playing music right now. The Secret Society from the North is industrial and strives for perfection and innovation through complex meters, chords and they double on so many instruments whereas Fight the Big Bull is earthy and takes influences from past styles of music and adds personality. Argue conducts as the musicians aim for perfection in performance while Fight the Big Bull’s sound is built around nuance in performance and never playing things exactly the same way. Argue’s band pulls from a set of musicians so the lineups are almost never the same and you hear different voices whereas Fight the Big Bull rarely if ever subs. Leader and guitarist Matt White almost lets entire sets go by without saying anything to the crowd whereas Darcy James Argue spends three to five minute explaining the story behind each tune, which includes everything from inventor Bucky Fuller to the French secret society: Jacobin Club. To really add to all of this, The Secret Society finished with the tune “Transit”, a full embodiment of the urban north while Fight the Big Bull finished with a cover of “The Night They Drove Old Dixie Down”.

The golden age of big band ended 60 years ago and in a time where budgets and busy schedules limit how much bands can tour, both Fight the Big Bull and Darcy James Argue’s Secret Society are proving that it can still be done.