Day #071: Boulevard and attempting to build something better than The Fan

When was the last time we challenged ourselves to build something better than [insert your favorite part of Richmond]? If Richmond burned down for a third time and you could save 5% of it, what would you save? What would you do differently when rebuilding the rest?

Discussions about development on Boulevard, a tacit motivator of the Shockoe Bottom baseball plan, are heating up again. If the new Starbucks with 23 surface parking spots and talks about Wal-mart are any indication, then the project will lack vision, be built for the short run, and not benefit the Metro-Richmond area. Instead, plans should be ambitious and focused on the longterm while centered around human-scale development and neighborhood building.

Boulevard is undoubtedly one of the most exciting areas for development in the Richmond city limits. Roughly 58 acres, 40 of which are owned by the city and 8.9 owned by the RMA, sit nestled between the Northside, an exploding Scott’s Addition, I-64, I-95, and the proposed BRT line. 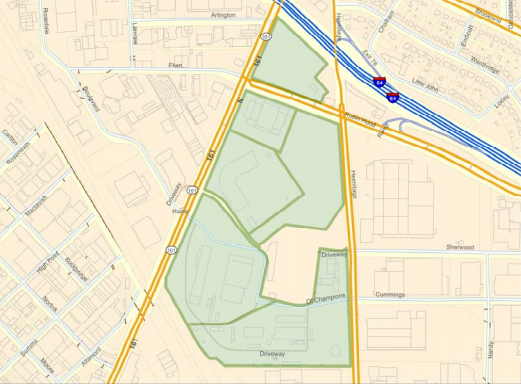 The area is ripe for 500,000 square feet of development, and last month the Richmond Development Authority approved a second study of the area for $75,000.

This all brings us back to the first two questions at the beginning of this article. Boulevard redevelopment gives us the opportunity to learn from the history of Richmond while building something that will improve the lives of thousands for the next century. What would you do?

Unfortunately, there are insurmountable issues that will likely result in cookie-cutter projects:

If these weren’t issues, then this is what I would recommend:

The Boulevard project is one of the last opportunities for large scale infill development in the core of the city, and it can act as a the connecting piece between the established Northside and exploding Scott’s Addition. This is an unbelievable opportunity.

Instead of a series of big-box stores,1 the area should be mixed-use development. Apartments and condos should be built on top of first-floor retail. This limits security costs because eyes will be on the streets. It also builds a customer base into the space, especially for restaurants.

An unbroken facade that fits the character of the space is essential so garages should go above or below the first floor. Parking lots are sized for the Saturday before Christmas. Half of the parking should be designed in a way that it can be used differently for 11 months of the year. Maybe it could be a central plaza but exposed asphalt, setback store fronts, and gaps in buildings should be avoided.

Aesthetics (Day #023) should be given the utmost care while feeling natural. The space should also be made to either be highly recyclable or highly flexible and built to last. “Futon buildings” are financially tempting for a quick ROI but are bad for society and posterity (Day #015). The Rio Grande Cafe at the Stony Point Fashion Park is a perfect example of how inflexible spaces can plague a retail area.

The Fan wasn’t built to maximize tax revenue from the years 1905-1915. It was built to be the best neighborhood at the time, and now it is the gift that keeps on giving as well as one of the greatest neighborhoods in the country. Imagine if this same care had been given to all development in Richmond for the past century.

Until we recommit to neighborhood building and a longterm development horizon, we will continue to build spaces devoid of character that create physical and emotional barriers between us instead of bringing us together.

Build on a human scale

The best retail spaces in the world are highly walkable. Even more importantly, they are built on a human scale. It’s worth visiting Andrew Alexander Price’s website to see photoshopped images of narrower streets.

Mall walkers are a frequent source of comedy, but shouldn’t attracting walkers be the aspiration of a retail space? Narrow, welcoming streets should be so inviting that residents want to go on walks even if they aren’t interested in visiting The Sharper Image or Banana Republic.

We flock to Europe to experience physical environments that we are entirely capable of building stateside. Sure we don’t have the Louvre, but building a neighborhood inspired by the commercial neighborhoods of Amsterdam, London, or Barcelona is as simple as following a few basic principles: build at a human scale instead of car scale and promote access through a variety of means.

If I had asked people what they wanted, they would have said faster horses.2 Henry Ford

Willow Lawn, Short Pump, and Stony Point already exist. The Metro-Richmond area doesn’t need another soulless retail space with 30 acres of surface parking lots that will end up on deadmalls.com in 15 years. People want to leave the suburbs, even if only for an afternoon. Trying to recreate the suburbs within the city limits would be sacrificing the main competitive advantage of RVA: it’s not the suburbs.

It’s tempting to lure a bunch of stores and shoppers across the city border for a quick revenue boost, but that doesn’t benefit society and it wastes a bigger opportunity. We should build something that redefines the medium.

I don’t know exactly what that is. But with more experience, designers, planners, and the ability to crowdsource ideas than at any point in history, we should be able to build something better than 1960s-style strip malls.

The city is limited in how much they can control, but they do own most of the property and control zoning. They should simplify zoning for mixed-use spaces, and provide leadership and a vision for creating something meaningful.

Many of these ideas can work for most development in Richmond moving forward. Focusing on Boulevard is a worthwhile exercise because it captures the imagination. In the last 50 years, we haven’t built anything that will be anywhere near as universally appreciated in the future as The Fan is now. With 100 more years of development experience, we should be able to build something even better. Or, at the very least, we should try.