How could designers and artists enhance Richmond’s bland infrastructure? Aesthetics have value. In addition to impacting mental health, productivity, and the city landscape, they have monetary value that can be realized through tourism and increasing the desirability of living in a city.

Modern infrastructure in Richmond has focused and excelled at practicality and functionality but not without robbing the city of some of its beauty. A survey of the bridges crossing the James River, infrastructure surrounding the Downtown expressway, and even some of the development around Browns Island leaves much to be desired.

Infrastructure doesn’t have to add beauty, but at the very least it should frame the beauty already present in RVA–it should have good design that strikes a balance between functionality and accentuating the spirit of Richmond. The new Huguenot Bridge cost approximately $54.5 million. While the old bridge was far from beautiful, the new bridge lacks any aesthetic worthy of drivers, riders, pedestrians, and boaters. 1

What would it take to hire artists or designers to make subtle changes? In Albuquerque their bridges and overpasses simply have orange bases and a blue stripe on the retaining walls. Occasional metal fixtures and sculptures help users forget they are crossing bridges while further establishing the Southwest brand that attracts people to New Mexico.2 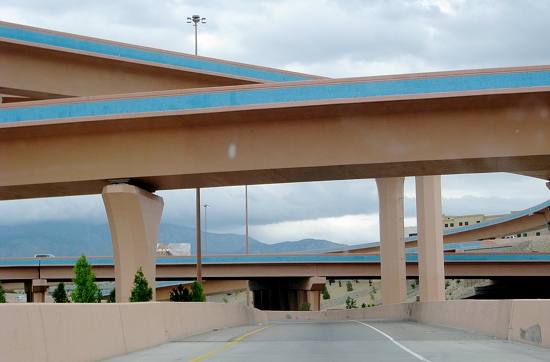 Where we want our infrastructure to fall in the push-pull between pure functionality and pure aesthetics is an important conversation to have as a community, but in the meantime there has to be an alternative to paving and concreting every square inch of the city. There’s never a time too soon to start building an RVA landscape worthy of its residents and of the future.