After the Confederate success at the Battle of Chancellorsville in May, General Robert E. Lee was ready to take the fight north to the Union in June of 1863. Despite their recent victory, the Army of Northern Virginia suffered from a lack of food and supplies, and Lee knew that the Union countryside would be able to provide plenty of both. The presence of both armies locked in a standstill at Fredericksburg had put a significant strain on food and provisions in Virginia. In addition, Lee knew that a move north into Pennsylvania would put him in a good position to attack cities like Philadelphia, Baltimore, and Washington DC.

In early June, Lee began to move the bulk of his force away from Fredericksburg towards Culpeper. His plan was to continue moving his army west into the Shenandoah Valley and then head north to cross into Union territory. It was essential that this infantry movement be masked for as long as possible in order to retain the element of surprise. For this task, he relied upon the cavalry force of Gen. J.E.B. Stuart. As the infantry moved west, Stuart would hold a forward position with five cavalry brigades and make small Union raids across the Rappahannock. As Lee prepared to depart, Stuart’s cavalry made camp at Brandy Station, VA.

Across the Rappahannock, Union General Joseph Hooker caught wind of Stuart’s movements and assumed he was preparing to make a move on Union supply lines. He sent a large force of Union cavalry under Gen. Alfred Pleasonton across the Rappahannock to “disperse and destroy” Stuart and put a stop to this suspected attack. Pleasanton’s force consisted of 11,000 troops–mostly cavalry but also infantry and artillery as well. At 4:30 AM on the morning of June 9th, Pleasanton’s force made a surprise attack on the sleeping Confederates in the early morning fog.

The ensuing battle that day would become the largest cavalry battle in North America.

The Confederates rallied after the initial surprise attack, and the fighting remained hot throughout the day. Because the battle was so heavily fought by cavalry forces, there were aspects to the battle that weren’t all that common in the war: large cavalry charges, hand-to-hand combat, fighting from horseback. Of the 22,000 soldiers engaged in the battle that day, nearly 17,000 were mounted cavalry.

A pivotal point in the day occurred on a spot called Fleetwood Hill. The hill, left largely undefended, would have provided the Union artillery a strong position from which to attack just about anywhere on the battlefield. Realizing their vulnerability, Stuart sent Lt. John Carter and a gun crew to man one lonely 12-pound Napoleon artillery gun on the hill. It had been left there previously because it was low on ammunition. With only a few shots remaining, Carter and his crew fired down upon the Union forces. Mistakenly suspecting that several more Confederate guns were waiting on top of Fleetwood Hill, the Union forces hesitated, allowing the Confederates enough time to provide reinforcements to secure it. As the Union force began to reach the crest of the hill, Confederate forces were just crowning the hill on the other side to protect it. The Confederates held Fleetwood Hill. 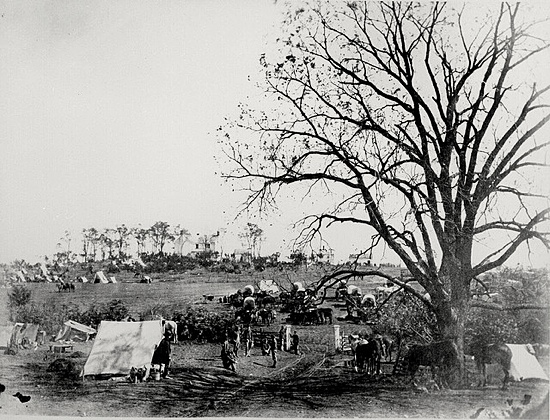 After several more attacks and counterattacks, Pleasonton ordered a general withdrawal at sunset. Stuart and his cavalry had held the ground, but more importantly, prevented the Union from learning of Lee’s infantry movements. The battle was considered a Confederate victory but it was clear to all involved that the Union cavalry had made significant improvements since the early years of the war and were now a force to be reckoned with. Had the surprise attack been more effective and Stuart’s forces beaten, it could have ended the Gettysburg campaign before it had even begun.