Civil War: Battle of the Crater

In the early morning hours of July 30th, 1864, a massive explosion rocked the main Confederate trenches outside Petersburg. The blast sent soldiers, horses, artillery, and more hurtling through the air. The first major event since the start of the siege of Petersburg, which began in mid-June 1864, started with a bang.

In the early morning hours of July 30th, 1864, a massive explosion rocked the main Confederate trenches outside Petersburg. The blast sent soldiers, horses, artillery, and more hurtling through the air. Over 250 soldiers died in the blast, which opened up a sizeable gap in the Confederate defenses. This was the opportunity Gen. Ulysses S. Grant’s Union army had been waiting for. As the smoke cleared, Union soldiers rushed forward to take advantage of the new vulnerability in the Confederate lines.

Some might recognize what happened next as the opening scene of the 2003 film Cold Mountain, but first, it’s important to explain what led up to the explosion.

Prior to the pre-dawn chaos of July 30th, Union soldiers from Pennsylvania had labored for weeks to dig a tunnel over 500-feet long leading directly underneath the Confederate earthworks. The men, who had worked in coal mines prior to the war, had devised a plan to end the stalemate between the two armies at Petersburg. 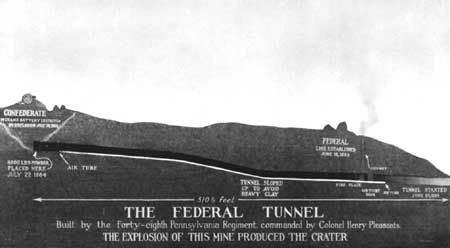 The plan almost seems comically simple in retrospect–“let’s build a tunnel, load it up with explosives, and blow it up!”–but the actual work was anything but simple. The engineering feat, which included a system for circulating fresh air for tunnel workers, was truly impressive considering that most of the tools being used in the process were improvised. Not only was it complex from an engineering standpoint, but it was also incredibly dangerous. Beyond the risk of tunnel collapse or a mishap with the explosive powder, the Union also risked discovery by the Confederates. In fact, Confederates began to suspect the Union plot after the faint sounds of digging could be heard under the earth. Two attempts at digging a “counter mine” were abandoned after the Confederates failed to locate any tunnels.

When the tunnel was finally completed, Union Gen. Ambrose Burnside, who commanded that section of the Union line, set about preparing for the assault that would follow the explosion. He chose a fresh division of black soldiers from the United States Colored Troops (USCT) to lead the assault, prepared them for the aftermath of the explosion, and specifically trained them for the task ahead.

Concerned about the political fallout from possible heavy losses of black soldiers in the assault, Gen. George Meade instructed Burnside to give the responsibility of leading the charge to a division of white troops just the day before the explosion was to take place. Burnside drew straws for which new division would lead the attack.

On the morning of July 30th, in the minutes after the explosion, the Union plan began to unravel. The awestruck and untrained leading division didn’t begin the assault for a full ten minutes after the explosion. Once they reached the massive crater, instead of going around either side like the USCT soldiers had been trained to do, they ran headlong into the crater. Wave after wave of soldiers followed into the crater, only to get stuck in what became a traffic jam of charging Union troops.

Confederate sharpshooters quickly realized the situation unfolding and began shooting into what was later described as a “turkey shoot.” Soon after, artillery was brought in to fire down at the Union soldiers in the crater. The brilliant engineering work and strategy that went into the surprise attack quickly devolved into a mess. Confederates soon regrouped and closed the window of opportunity created by the newly-formed crater. Union troops began to withdrawal in the early afternoon hours after being unable to recover from the slaughter.

In a few short hours, Grant’s best chance to end the siege of Petersburg had come to an end. After the war, Grant would later refer to the attack as “the saddest affair I have witnessed in this war” and speculated that had the original plan to let the trained USCT soldiers lead the assault, it may had been more successful, potentially bringing the war to an earlier close.

The siege of Petersburg would continue another long nine months.