Chartsandgraphs: looking back at the 2012 Spring Restaurant Week

Restaurant Week! Bringer of hungry restaurant patrons and loads of web traffic! As I was doing a bit of analysis on last week’s traffic data, I realized that what I was really looking at was a kind of zeitgeist for the 2012 Spring Restaurant Week. Here’s some of that data in chartsandgraphs form! Richmonders love many things: the James River, humidity, potato salad. But one thing we love more than all the things is food and restaurants. So when Restaurant Week rolls around, twice a year now, people in town get excited. Which is awesome!

Restaurant Week is a big traffic driver for RVANews as readers are sifting through the dozens (in this iteration there were 39 participating restaurants) of menus before they buckle down and make a reservation or two. This leads to, like I said, a lot of visitors.

As I was doing a bit of analysis on our traffic data, I realized that what I was really looking at was a kind of zeitgeist for the 2012 Spring Restaurant Week. It’s not scientific, it doesn’t measure the success (or lack of success) of any one restaurant, and is solely based off of RVANews’s Google Analytics data. But it is interesting.

Again, just to be clear, I’m not saying (and the data doesn’t say either) that any of these restaurants are better or worse than their fellow Restaurant Week participants. Got it?

The ten most visited menus

Here are the ten most visited menus on RVAnews. What’s interesting about this graph is just how far ahead Helen’s is from the other restaurants. And even more interesting is where most of those people reading Helen’s menu were coming from: Facebook. Google was the principle traffic driver for the nine other menus.

This year we decided to lay out our main Restaurant Week page a bit differently. Rather than an unending bulleted list of text that would be impossible to scan, we chose to create a grid out of the pictures of the participating restaurants.

We had some concerns that restaurants at the bottom of the list and restaurants without a picture (we used a default image) would get the shaft.

Below is a similar grid. The darker the box, the more views that menu got. If the box has a ‘Y’ in it, that restaurant had a picture. You can see that position in the list didn’t really affect views, but having a picture probably did. We’re going to try to make sure each restaurant has a picture for this fall’s Restaurant Week.

Here are three word clouds (which really aren’t the best way to analyze data), one for each course. The larger the word, the more often it appeared across all 39 menus.

Perhaps more interesting would be the inverse of these pictures, with the least common words more prominent. This might give you some insight into which restaurant had the most unique menu. 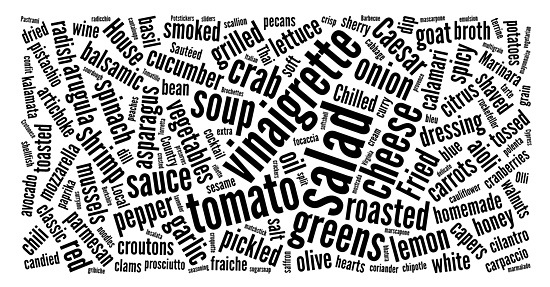 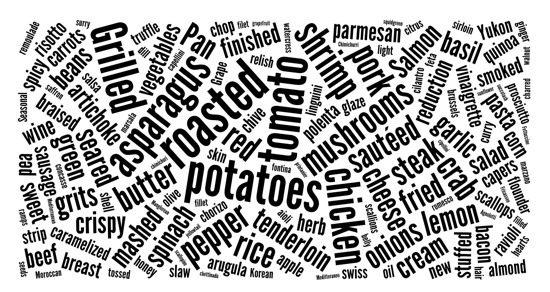 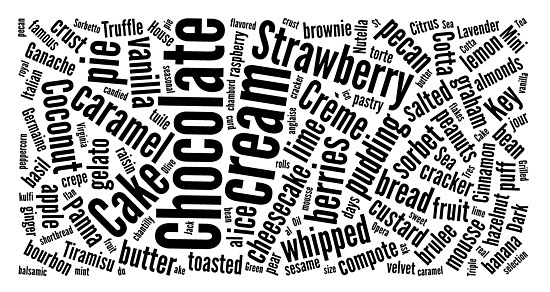 While a lot of users ended up at specific menus directly (as a result of a Google (or Bing!, seriously!) search), most came through our main Restaurant Week page. For those users, on average, each one visited 4.2 menus.

I’m not sure what this means, but to me it suggests that people are pretty open minded while deciding where to make their Restaurant Week reservations.