BetaBox has come to town!

It’ll be here all week over at St. Catherine’s, making amazing things and blowing our minds with practical technology applications. Also, the term “makerspace” is neat. If you’ve driven down Grove Avenue this week you might have seen a large blue shipping container outside St. Catherine’s, in which case you already know BetaBox is here! And if you saw the big blue box and wondered what it was doing there, read on. BetaBox is a mobile makerspace that’s created in a shipping container by Betaversity and can be brought to any school or organization that wants to create an instant prototype pod space. Whether you’re interested in learning how to create a 3D-printed hand or a new vacuum nozzle prototype, BetaBox has you covered! Bright and early on Monday morning as BetaBox was just setting up, I met with Nicholas Sailer, Director of Creative, to chat about the project.

Can you tell me a little bit about how BetaBox came to be?

Nicholas Sailer: BetaBox is a product that our company Betaversity has and runs. We started BetaBox about a year and a half ago, and we’ve been going around to different schools, universities, events–and it started because all of the founders were involved in makerspaces at their respective schools. … [The Betaversity founders] all met at a conference, and they started working in makerspaces, started talking to schools about how to make makerspaces. We actually started out consulting, and then we realized there’s a better way to bring makerspaces to a larger community. So that’s how BetaBox was formed–we saw the idea of putting something in a shipping container. Michael, who’s an architectural designer, started to collaborate to actually make this happen. And we actually really brought it to life and traveled to Duke, UNC Chapel Hill, NC State, and more and more from there. 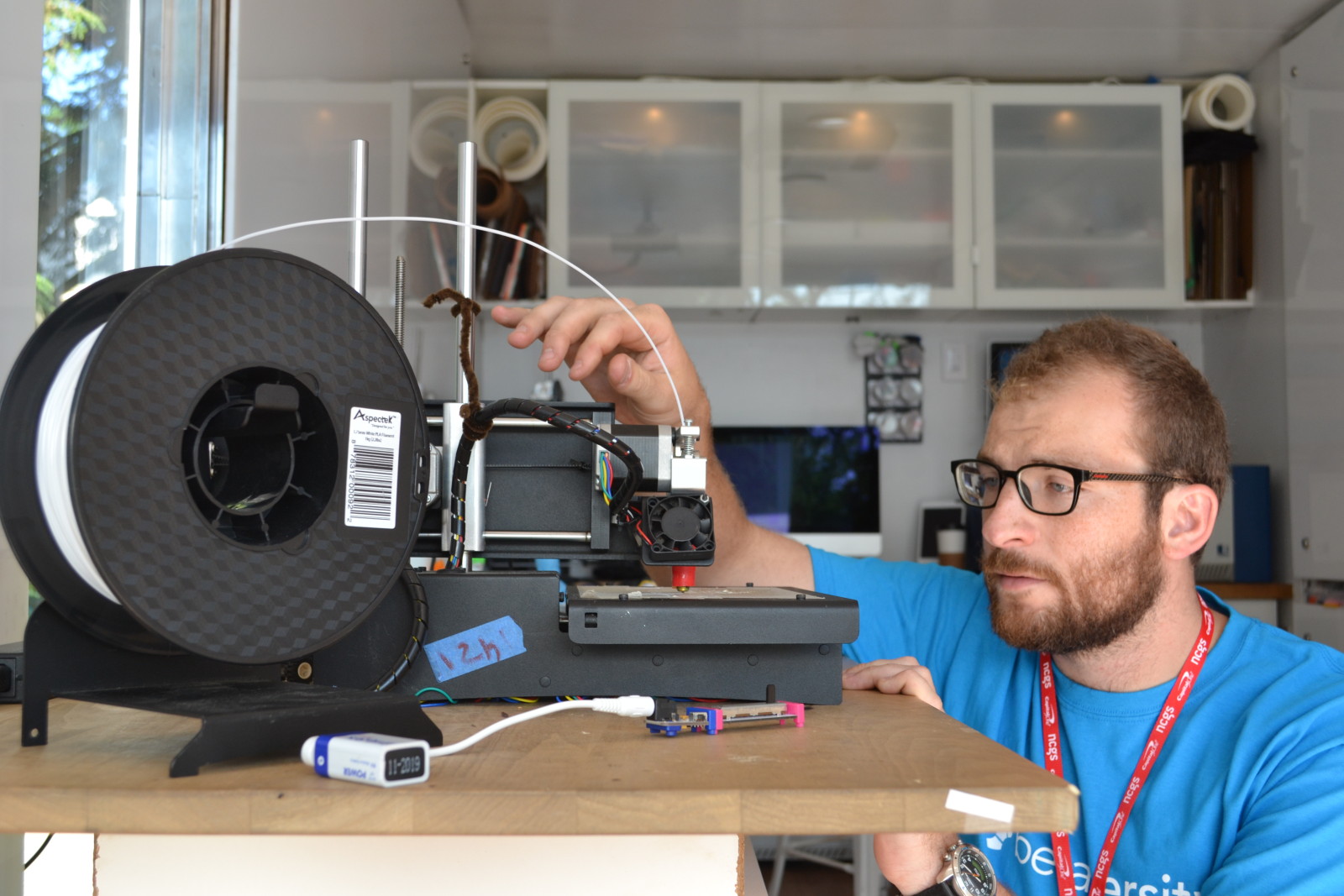 Have there been any projects you’ve seen that were started in BetaBox that have gone on to be bigger projects now?

NS: Yes–when we went to Duke University, we talked to a couple [engineering] students there and…one of them in particular prototyped a 3D-printed asthma inhaler. So that was a cool project to see. We had another student come in with an idea for a more ergonomically designed vacuum nozzle.

Now, what was more ergonomical about it?

NS: Well, he did some some different studies, and he also had a lot of experience working in some car/auto shop. His job was to vacuum all day, and he had terrible wrist pain, so he designed a nozzle to solve that problem. That’s something we really promote–see a problem in the world and then talk to the people who have that problem (or maybe you’ve experienced it yourself), and learn from the people around you to solve the problems that they have. 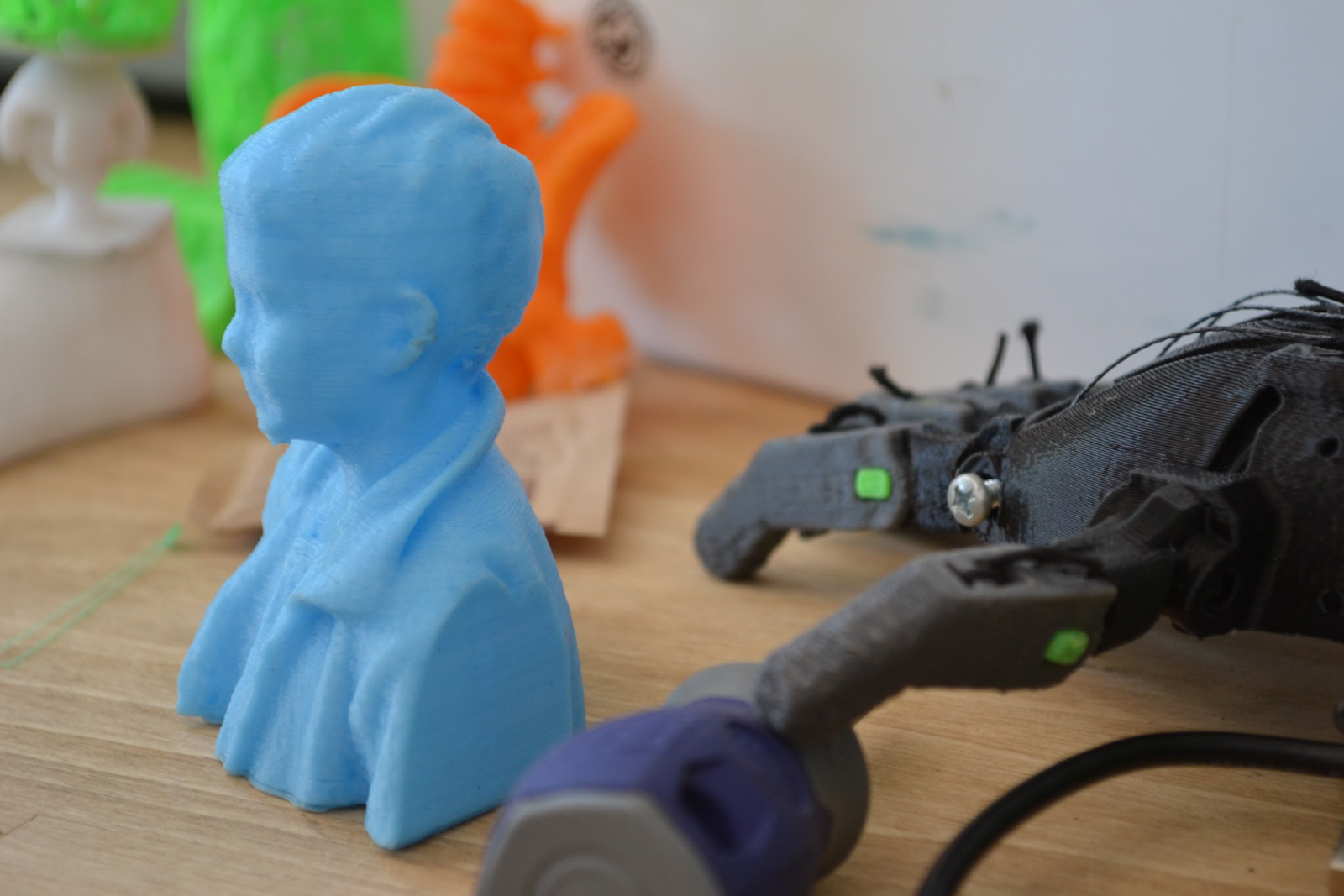 Yep, BetaBox is capable of this. Photo by Hayley DeRoche.

Why Saint Catherine’s–why are you guys here today, or, rather, this week?

NS: We’re here for the National Coalition of Girls’ Schools Conference, and then Thursday and Friday we’re here for Saint Catherine’s Brilliant Summer program. … Capital One is the sponsor that brought us here, and the NCGS Conference is the event that we’re here for, and Saint Catherine’s is the location. So it’s a lot of different stakeholders but we’re really glad to be involved in all of them and they’ve got a lot of really cool things going on here.

Will you have classes of girls come in and create any prototypes?

NS: On Thursday and Friday, we’re going to have groups of students coming in. We’ll be doing two different projects: one of them uses all of the different technology here. It’s a 3D-printed LED flower, so that’s cool, because if you have 20 students who all make flowers, you can plant all of them in one place. And they all glow at night–cool to see. We’ll laser-cut the flower petals, we’ll 3D-print the flower buds, and they’ll actually be able to put the LED together on the battery, put it all together, and go out and plant that. 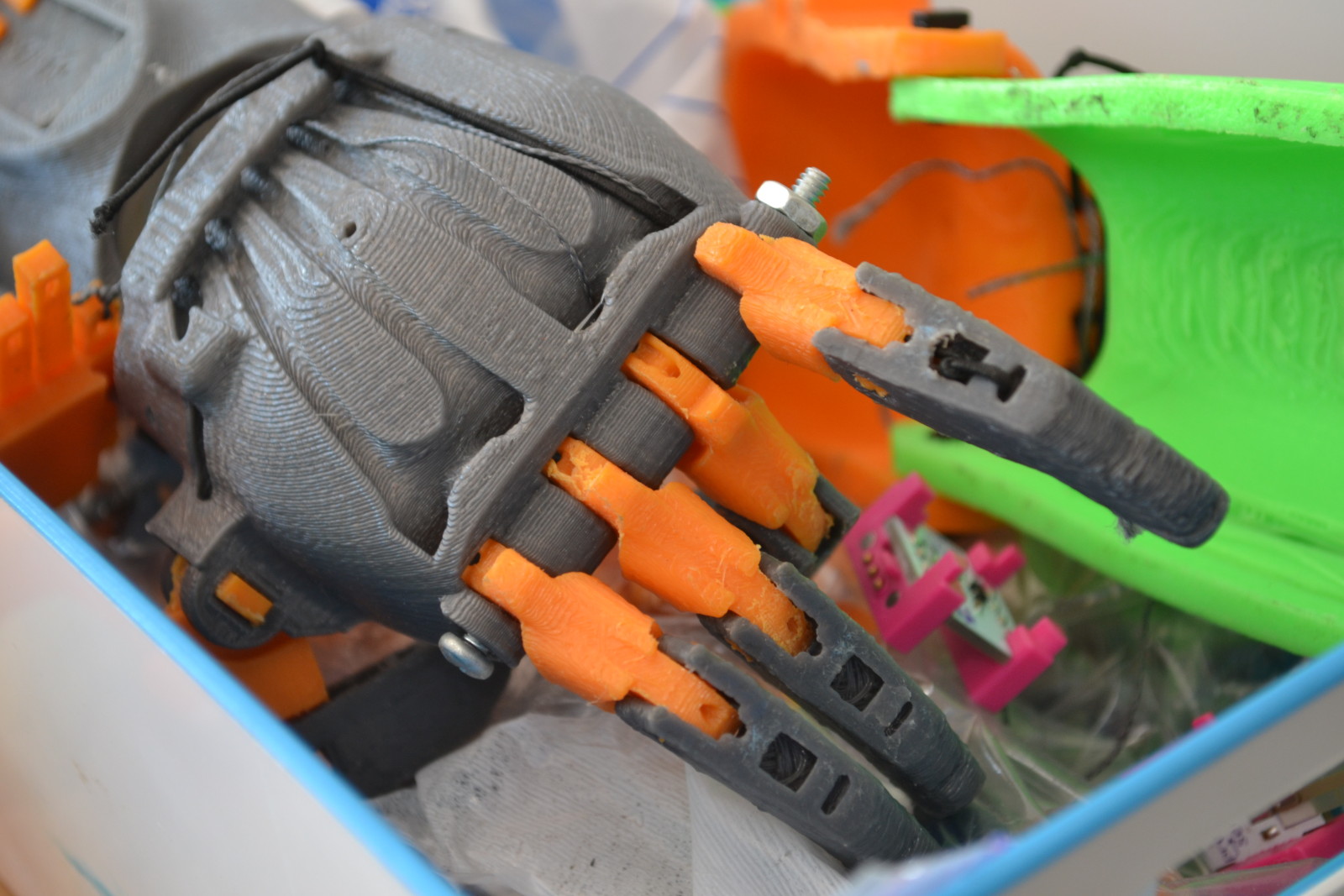 This too! Photo by Hayley DeRoche.

The second project they’ll be doing is a customized rocketry project, so we’ll be having small air-compressed rockets, a 3D-printed nose cone, and laser-printed fin they can glue on and attach, then we go outside and launch the rockets, which is always fun to see.

What do you see as the future of BetaBox–do you see yourselves going to other schools like this? Becoming more of a staple? What are your goals?

NS: Definitely! BetaBox will be going around to lots of different schools, and we also open up the BetaBox Partners program, where, say, an academic organization or company can partner with us and get a BetaBox of their own. We equip their employees or members with the skills they need to run a BetaBox, we give them the training material, projects, basically all the support and then they can operate it for all the different schools in their region. … That allows us to bring makerspaces to more areas. 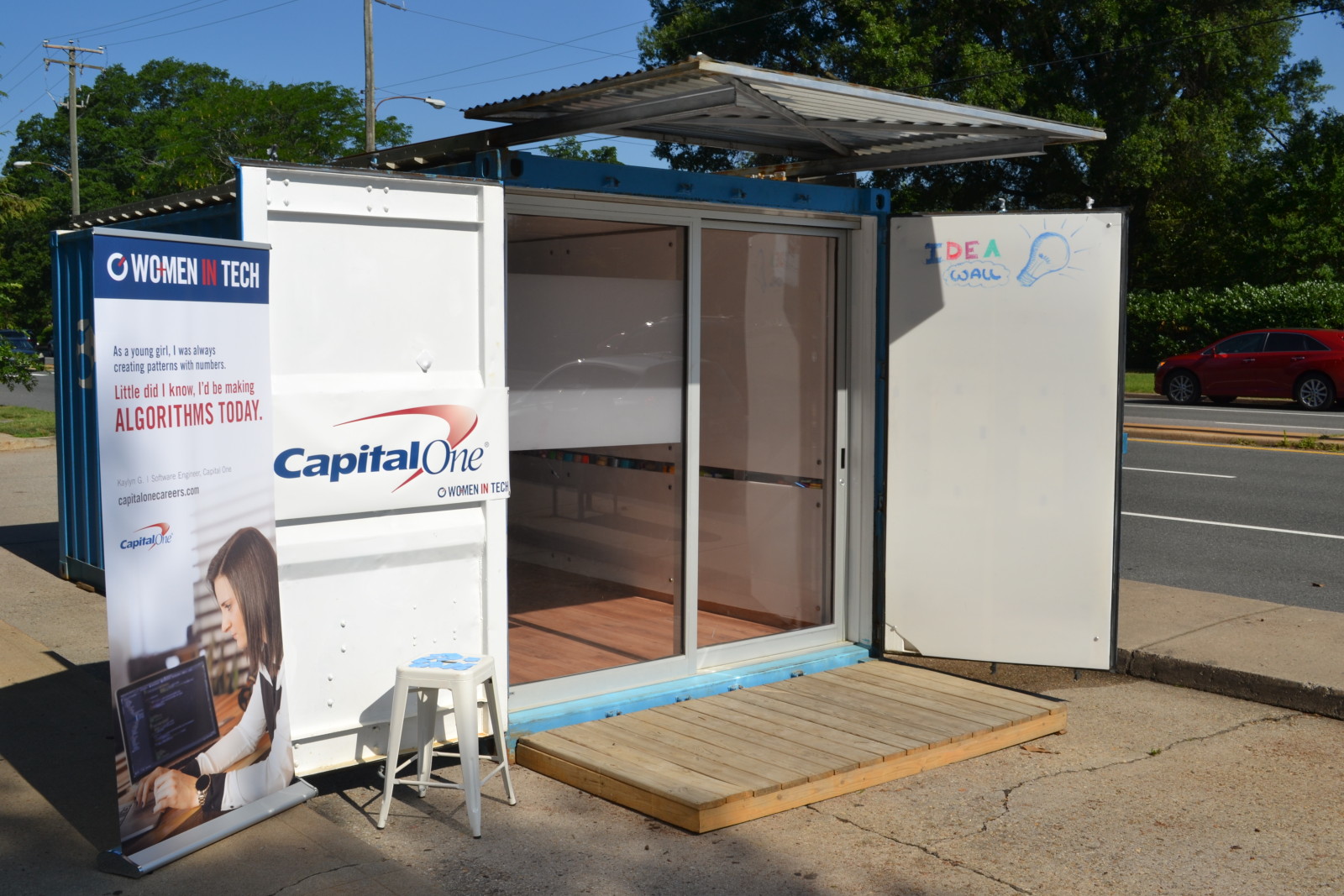 We also started talking to students about a problem a lot of theme are running into, which is that we see so many cool projects getting made here, then the projects would go home or to a dorm room and sit on the shelf and not really have a life beyond that. So what we want to do is actually give students a place to document their projects and start to share those with coworkers, employees, friends, and family–we’re creating an online portfolio platform. If you go to Betaversity.com right now, that’s the main portfolio platform, and we’re talking … connecting students to companies via these hands-on projects. … We really believe that hands-on projects and hands-on learning are the best way to show your skills, show your thought process and problem-solving process, and I think companies are starting to realize that as well.

We are just really excited about students who are building really cool things with their hands, so this is a good way of enabling that to happen and bringing it to life.

You can see BetaBox all week on Grove Avenue in front of St. Catherine’s, 6001 Grove Avenue.