One reader asks: “I am curious as to what weather prediction looked like before the advent of radar. Where did weathermen such as yourself get their data to make predictions or did they not? When did they start using radar, for that matter?”

I am curious as to what weather prediction looked like before the advent of radar. Where did weathermen such as yourself get their data to make predictions or did they not? When did they start using radar, for that matter?

Operational weather forecasting is a relatively new concept, having come about in the last half of the 20th century. Prior to the advent of radar and satellite technology after World War II, the task of gathering meteorological data was primarily a human endeavor.

Though meteorology as a science has existed since the days of Aristotle, forecasting even in the 19th century was little more than using what happened in one location to predict what is happening to the east, based on the presumption that what happens flows downstream. Beginning in the early 20th century, following the formation of the US Weather Bureau in 1890, ships also began transmitting weather reports via radio.

As the Weather Bureau expanded its product offerings, it was still these daily observations that were the primary data source for weather forecasts and planning. It wasn’t until after World War II that radar came into use by the Weather Bureau. In 1960, the first weather observing satellite was launched, named TIROS I. Its successful deployment broke ground for further advancement in the field of remote sensing, and the use of both radar and satellite data is virtually ubiquitous today.

Roger Whiton and others published a paper in the journal Weather and Forecasting documenting the history of radar usage by the National Weather Service and its predecessor, the US Weather Bureau. Here are some of the highlights.

The Air Force and MIT began research on weather surveillance using radar during World War II. We don’t know as much as we would like about this period because much of this research was classified. We do know that research was done in the United Kingdom in this same time period, and that weather surveillance radars were installed at both ends of the Panama Canal and in other high-profile civil defense locations.

Following World War II, what was then the United States Weather Bureau acquired 25 AN/APS-2F aircraft radars from the Navy, and installed them as the first generation Weather Service Radar, or WSR-1. The first was installed March 12, 1947 at Washington National Airport. Successive generations of these radar units, dubbed WSR-1A, -3, and -4, remained in service well into the 1970s. A WSR-3 located at Byrd Field (now Richmond International Airport) was commissioned in 1958 and removed in 1969.

The 1950s saw major inroads made into the use of radar for short-term weather observation and forecasting, especially in the use of warning operations. In 1953, a radar unit being tested by the Illinois State Water Survey picked up returns from a storm about 25 miles north of the unit. The electronics technician working on the unit used a 35mm camera to take a picture of the scope, recording an image of not just the thunderstorm itself, but what Whiton described as “a hooklike appendage extending southward” from the cell. Two more were sighted on radars observing storms at Waco, Texas and Worcester, Massachusetts within the following two months. 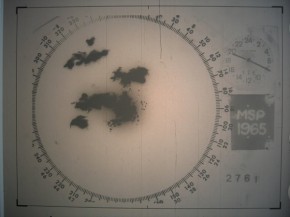 Following more than two years of research and development, the Weather Bureau began installing WSR-57 units (Weather Service Radar, 1957) at existing Weather Bureau office beginning in 1959. The first radar units designed specifically for weather operations (rather than using a modified military unit), WSR-57 radars remained in operation at Weather Bureau/Weather Service offices into the 1990s. The final unit was decommissioned in 1996. These units included 35mm and Polaroid cameras permanently mounted over the radar scope to capture images of significant events.

As time progressed, the Weather Service developed better software for processing WSR-57 imagery. However, despite the improvements, the WSR-57 units had deficiencies. Adjustments to the radar’s elevation angle had to be done by turning a crank, and any tracking of storms had to be done by using a grease pencil to draw on the radar scope. 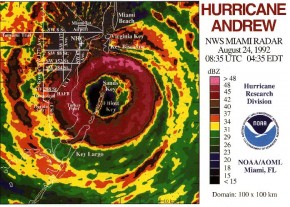 Final WSR-57 image of Hurricane Andrew from the NWS Miami office, prior to the storm's destruction of the radar dome on August 24, 1992. Credit: NOAA

Spare parts became sparse, especially since the WSR-57 used WW2-era vacuum tubes, and though the 66 installed units provided coverage for most of the US, there were still many gaps in coverage. By 1976, the successor to to the -57s had been approved, and was designated WSR-74.

The WSR-74 units came in two flavors. -74S units operated in the same S-band frequency range that the WSR-57 units did. These radars were added to fill gaps in the existing national network, using radar frequencies that did not deteriorate when they encountered rainfall aloft. A WSR-74S unit was installed at Volens, VA as part of the national network and commissioned on April 12, 1977. It was decommissioned on December 1, 1995. WSR-74C radars operated in the C-band, which transmits at a higher frequency, and experienced far more attenuation from heavy rain. These radars were only typically operated for local coverage of severe weather events. Often, but not always, they were located near major metropolitan areas to provide additional coverage. The nearest WSR-74C to Richmond was in Raleigh, NC.

The primary limitation of both the WSR-57 and -74 units was that it could only provide reflectivity data. That is, the radar could only measure how much of the radar beam was absorbed by a particular area aloft, and translate this into a measure of the intensity of an area of precipitation. There was no way to programmatically determine the motion of of a storm, or to determine if a storm was rotating at all. Having this information would give the Weather Service invaluable lead time to issue warnings and allow people to take steps to protect life and property before it was too late.

The Weather Bureau and other government entities have been conducting research using Doppler radar since the 1950s. The Doppler effect (named for Austrian scientist Christian Doppler) describes the change in frequency that occurs in waves when either the source or the receiver is in motion. You’ve no doubt heard an ambulance siren change pitch as it approaches, passes, and then moves away from you. This principle works the same with both electromagnetic waves as it does with sound waves. Police radar guns and Doppler weather radar both apply this principle of physics to calculate the velocity of a remote target. The fruit of this research was the Next Generation Radar system (NEXRAD), or the Weather Service Radar, 1988 Doppler (WSR-88D). 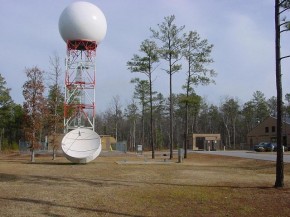 The NEXRAD system brought a number of improvements to the radar system, including enhanced sensitivity (which has been further advanced in the 20 years since its development), an automatic continually-updating radar, and numerous new algorithms and products for identifying specific atmospheric features and precipitation types. The National Weather Service began a campaign to modernize and consolidate through the 1990s. The first NEXRAD system was installed in 1990, and through the next eight years the remaning WSR-57 and a vast majority of the WSR-74 systems installed were decommissioned and replaced with 88D systems. In Virginia, the radar unit at Sterling (located near Dulles International Airport) was upgraded to an 88D, and the -74 at Volens, which provided coverage for a majority of the state, was decommissioned and replaced with two 88Ds, located at Wakefield and in Floyd County.

It’s certainly not that we rely only on satellite and radar information now. Most of the functions that have been performed by human observers in the past were automated during the period of consolidation in the 90s. Automated Surface Observing Stations or Automated Weather Observing Stations are located now at most major airports, and quite a few smaller ones, providing 24-hourly reports of weather conditions. This information, along with radar data, satellite trends, computer models, and many other analyses are used in making modern weather forecasts. We still look at what’s happened upstream, too.