One reader asks, “Is it really possible for it to rain frogs? I’ve heard stories about it before, but I never believed that it was actually possible. Is it just an urban legend?” Read on to find out if it’s true…

Is it really possible for it to rain frogs? I’ve heard stories about it before, but I never believed that it was actually possible. Is it just an urban legend?

We’re all familiar with the phrase “raining cats and dogs.” That’s never happened, but it’s not entirely unusual for other objects — including animals — to fall from the sky. Frogs, fish, eels, straw, corn, and even the occasional cow, have been reported to have fallen on unsuspecting citizens around the globe. It’s not just the stuff of Biblical-era stories or Tom Cruise films (see below), it actually happens.

In March 1998, the Daily Mail reported about a South London housewife who found a downpour of frogs falling outside her window. A June 2005 storm caused thousands of frogs to rain down on the Serbian town of Odzaci, located about 120 kilometers northwest of Belgrade. In 1873, a Scientific American article reported on “A shower of frogs which darkened the air and covered the ground for a long distance” at Kansas City, Missouri. This isn’t just limited to adult frogs, either — in June 2009, several cities in Ishikawa Prefecture were subject to tadpole showers across multiple days.

Frogs aren’t the only animals that have been reported to fall from the skies either. In the Northwest Territories town of Lajamanu in Australia, it rained fish twice in a span of two days in February of this year. Corn husks, each about two feet in length, blanketed the area in and around Wichita, Kansas in August 2001. (The University of Nebraska denies any involvement in the incident.) Dust and sand from the Sahara Desert have been picked up and carried by global wind patterns and deposited as far north as England. 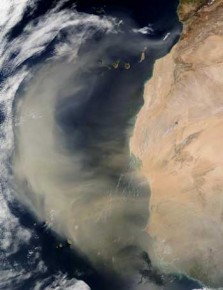 An arc of Saharan dust is carried by winds over the Atlantic Ocean. (Credit: NASA)

In fact, one of the elements that meteorologists take into consideration when looking at tropical cyclone formation in the Atlantic Ocean, especially in relatively close proximity to Africa, is the Saharan Air Layer. Large areas of storms and wind kick up dust from the desert, suspending it in the air, where the trade winds carry it over the Atlantic. Airmasses with large quantities of dust are sufficient to choke off tropical cyclone formation without much difficulty. Dust and sand that stays aloft long enough can ride the global wind patterns north and get deposited across Europe.

What causes these phenomena? No one’s really sure. Some meteorologists believe that the processes responsible for dropping Saharan dust on Europe work on a much smaller scale for the transport of animals and other materials. The most commonly accepted theory is that strong updrafts in thunderstorms, including tornadoes and waterspouts, pick up these small animals and transport them as the storm moves, dropping them when the downward force of gravity again overtakes the force exerted by the updraft, bringing them back to terra firma. Other times, thermal activity can cause the updrafts required to suspend animals and objects in the atmosphere. On warm, dry days, the heat develops updrafts that behave like small whirlwinds, which pick up the objects and carry them into the atmosphere. In the evening, when the air begins to cool, the energy that picked up the objects dissipates and they fall back to earth. In some cases, if the items are lifted high enough into the atmosphere, moisture will condense on the animals and freeze, encasing them in ice.

I still can’t explain how those coconuts landed near Camelot, though.

So yes, it’s entirely possible for it to rain frogs, fish, or any number of objects, and it happens more often than you would believe. I’d like to leave you the following from Gary Lockhart’s Weather Companion: