Ask Weather Dan: All about hail

So what is hail, exactly? Hail is a type of precipitation that falls as a ball of ice, almost always from cumulonimbus clouds (thunderstorms). They can get pretty intense.

What causes hail? That’s my question. I only started thinking about this because of this ridiculas vid I found:

You really need to turn the sound on to get the full effect of this video.

I’m just eyeballing it, but some of the hail lying on the ground appears to be at least baseball size, with a diameter around 2.75.” Severe weather reports from this day (May 16, 2010) show several reports of baseball-sized hail, in addition to some reports of softball-sized (4.25” diameter) hail!

Here’s a second video I found of a hail storm from early October in Flagstaff, Arizona, elevation 7000 feet.

Note all the leaves and branches that are getting ripped off the trees by the hail as it falls. It’s harder to guess what size those hailstones were, but reports from Oct 5-6 in the Flagstaff area were all around one inch in diameter. 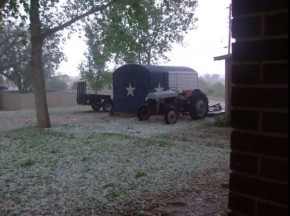 Hail on the ground at White River Lake, Texas following a thunderstorm on May 26, 2008. Credit: National Weather Service

So what is hail, exactly? Hail is a type of precipitation that falls as a ball of ice, almost always from cumulonimbus clouds (thunderstorms). An individual unit of hail is called a hailstone.

It’s important to know the difference between hail and other types of ice that fall from the sky; they’re formed by very different processes and look very different when they reach the surface. Sleet is probably the most familiar of those, and the primary difference is that in order or sleet or other ice pellets to form, a sufficiently layer of sub-freezing air has to exist at or near the surface in order to keep the precipitation frozen. Essentially, sleet pellets are nothing more than frozen raindrops (though I’m simplifying things a bit for the purposes of this discussion – the important thing to know here is that sleet is the size of raindrops, or smaller, while hail is much larger). In the case of hail, the freezing process is driven by the strong updrafts that occur within thunderstorms, and rather than being cold, surface temperatures are well above freezing.

A thunderstorm is created when a moist parcel of air is heated and becomes warmer than the surrounding air. As it lifts, air must flow in underneath it to replace it, creating an updraft of vertical wind. As the storm develops and intensifies, this updraft grows stronger. Within the cloud that develops as a result of this cooling, little droplets of water are coagulating together, eventually becoming heavy enough to overcome the force of the updraft and fall to Earth. You know this better as rain.

If the updrafts inside a storm are strong enough and can lift these water droplets high enough into the atmosphere, some will eventually cool enough that they freeze and become solid. Because of the physics involved, even at temperatures below 32 Fahrenheit, water droplets suspended in the atmosphere stay in liquid form rather than freezing immediately. However, if you introduce a solid object – such as ice, dust, or dirt, known as the nucleus of the hailstone – that is already cooled below freezing and comes in contact with these water droplets, they will freeze to the surface of the nuclei. As the updrafts in the core of the storm carry these nuclei higher in the storm, more and more water droplets will freeze to the surface, adding additional weight to the hailstone. Eventually, enough ice accumulates on the hailstone that it is heavier than the updraft carrying it, and it begins to descend.

If the updraft if stronger at a lower altitude in the thunderstorm, it will pick the hailstone up and carry it higher again, and the cycle repeats. In very strong storms, this process can happen several times. If you were to slice a hailstone open, you would see very ogre-like onion-like layers, where the hailstone has gone through multiple cycles of accumulating additional ice on the exterior.

Once the force of gravity pulling the hailstone down is stronger than the updraft, it will fall to earth. There are other forces working to reduce the size of the hailstone as it falls, however. Heat is its biggest enemy; as the hailstone falls below the freezing layer, it interacts with the warmer air and begins to melt. If a stone is sufficiently small, by the time it reaches the ground, there is nothing left but liquid water. This is why the states that see the most hail are along the Rocky Mountains; they’re at higher elevations, and hail there doesn’t have as far to fall to reach the ground as it does in Florida, which is the state that sees the most thunderstorms. Because of the heat and the elevation in Florida, the freezing level is so high that often times hailstones have melted long before they reach the ground. 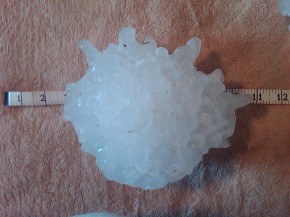 When conditions are right, hailstones can get quite large. In the evening of July 23, 2010, a severe thunderstorm developed west of Vivian, South Dakota. As the storm intensified and moved ESE, hail damage was reported across several counties. In the aftermath, several reports of hailstones larger than six inches in diameter were reported by residents along the storm’s track. Vivian resident Les Scott contacted the National Weather Service forecast office in Aberdeen, South Dakota, and reported that he had stored several large hailstones from the event in his freezer. Despite some melting due to a power outage, NWS employees measured the largest hailstone in the group, and found it to be 8 inches in diameter, 18.625 inches in circumference, and weighted 1.9375 pounds! This broke the United States hail record for both diameter and weight. The record for circumference (18.75”) belongs to a hailstone found in Aurora, Nebraska in 2003. It was also the previous record-holder for diameter until the Vivian storm. It’s estimated that the updrafts needed to support a hailstone of this size were between 160 and 180 miles per hour. 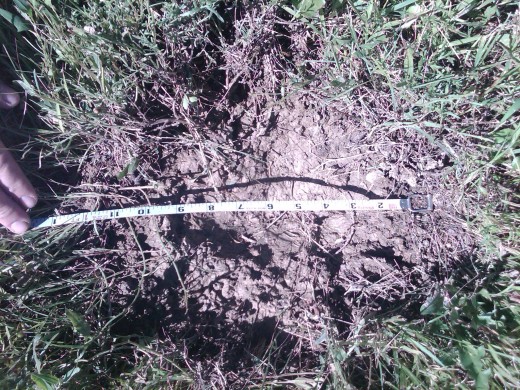 Which brings me to a good point – it’s not just about the wind speeds needed to support a hail stone aloft, it’s also about the speeds at which they fall. As hailstones increase in size, the maximum speed at which they fall also increases. For a hailstone of just one centimeter (0.4”) in diameter, its terminal velocity is 30.5 miles per hour. (NB: This isn’t exact; these figures are calculated using the terminal velocity equations for a perfect sphere, which hailstones certainly are not.) If we increase this to three centimeters (1.2”, just over the one inch threshold for severe thunderstorms), its 74.8 miles per hour. And by the time we get to 10 centimeters, or 4 inches – about the size of a tennis ball – the terminal velocity is 136 miles per hour. Ouch! It should be noted here that not all hailstones are able to reach terminal velocity before they hit the ground, and this represents the upper bound of speed, but these are not out of the realm of possibility. To be honest, even if we cut these speeds in half, I still don’t want anything the size of a tennis ball falling on my head at 68 miles per hour!

Take a second and think about the speed necessary for a hailstone to make the divot in the image above.

By the way, folks, I’m always looking for more Ask Weather Dan material! Feel free to leave your questions here in the comments or you can email me – dan@rvanews.com. Many thanks!