An ongoing recap of the damage caused throughout the Southeast by April 16th’s intense storm system. 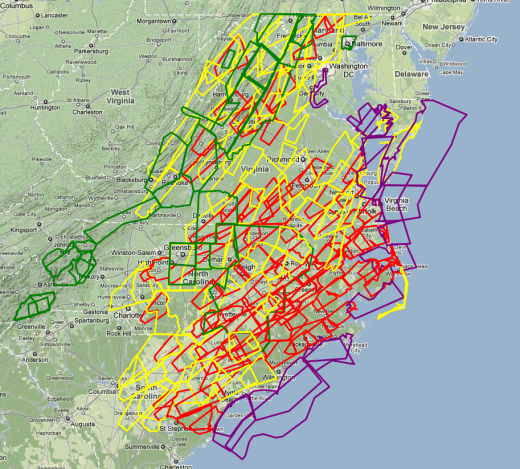 All told, the Storm Prediction Center has logged more than 100 individual tornado reports (many of these will be duplicates), 16 wind damage reports and 58 reports of hail on Saturday.

I’m starting this to include information about storm damage in Virginia and North Carolina. I’ll continue to update it as reports come back from National Weather Service storm survey teams and local media. This is by no means complete, and I would greatly appreciate any submissions that I have overlooked.

Weather Underground meteorologist Dr. Jeff Masters has a blog post recapping some of the damage and photos in both states.

Make sure you take the time to read both of these stories. Both give excellent insight into some of the meteorological aspects of forecasting Saturday’s event and offer great perspective on what meteorologists are looking at as events like this develop.

Jason Samenow from the Washington Post’s Capital Weather Gang has a reminder that these tornadoes were neither “unpredictable” nor a “surprise.”

Governor Bob McDonnell declared a state of emergency at 8:40am Sunday morning.

The Virginia Department of Emergency Management is using Tumblr to provide ongoing updates about the situation, including road closures, power outages, and relief efforts. Information can be found at http://virginiasevereweather-apr16.tumblr.com/.

As of Wednesday night, a total of 11 tornadoes have been confirmed across Virginia from Saturday’s outbreak. When combined with the 3 in Maryland, 26 in North Carolina, and 13 in South Carolina, that gives us a total of 52 tornadoes. One tornado crossed the border from North Carolina to Virginia and is included in both states’ counts, and is removed once from the final total to avoid double-counting.

According to media reports, the tornado did more than $2.5 million in damage in the county.

A National Weather Service storm survey team from the Wakefield, Virginia, office confirmed an EF-1 tornado touched down near the Five Forks area of the county. Tornado damage path and photos are available from the NWS as well.

WTVR-TV has a story about one woman whose home lay in the path of the tornado.

What was originally thought to be an EF-2 tornado that touched down between the communities of Coke and Ware Neck was surveyed and ultimately confirmed to be the longest track tornado that touched down in Virginia. The EF-3-rated tornado damage path that the National Weather Service ultimately surveyed began in Surry County, and passed through James City and Gloucester Counties before ending in Mathews County. Gloucester was the hardest-hit, especially near the community of Clopton, where the damage path was nearly a half-mile wide. According to the Daily Press, damage in Gloucester and Middlesex counties alone totaled in excess of $14 million.

The Virginia Department of Emergency Management reports that two people have died due from storms passing through the county. A third death was attributed to natural causes.

A map of the complete damage path and damage photos are available from NWS Wakefield.

WAVY-TV in Hampton Roads has footage of the hardest-hit areas in Gloucester, which include the partially-collapsed Page Middle School.

A storm survey team from the National Weather Service office in Blacksburg, Virginia confirmed an EF-2 tornado caused damage along a 16.6 mile path between Virgilina and Staunton River State Park. Four people were injured. The entire path of this tornado was 26 miles; it originally began as an EF-0 in Person County, North Carolina, before crossing the state line and moving into Virginia.

WDBJ-TV out of Roanoke has footage of the widespread damage around Staunton River State Park. According to their report, more than 100 people were camping in the park when the tornado struck. Thanks to the quick actions of park management, everyone was successfully evacuated to a safe place before the tornado struck.

A National Weather Service storm survey team from the Wakefield office confirmed an EF2 tornado was on the ground between the communities of Walters and Smithfield within Isle of Wight County. While most of the damage was to trees, more than 2 dozen homes were damaged, according to the report.

The Pilot Online has one eyewitness account from Saturday’s tornado in the county.

A National Weather Service, Wakefield office storm survey team discovered damage in Lunenburg County consistent with an EF1 tornado, along a path from Rocky Mill Road to just south of The Falls. While the tornado was on the ground, homes and sheds/outbuildings were all damaged by the tornado, especially in the area around Rehobeth Road.

The Surry County tornado weakened after passing through Gloucester County, before finally lifting just over the county line into Mathews County. While most of the damage took place in Gloucester, a few homes and other structures were damaged in the county.

Based on the storm surveys in the county, the National Weather Service has confirmed that two tornadoes touched down in Middlesex County. The first was an EF-1 that destroyed a home and a grain silo in the western portion of the county (damage path and photos). The second, an EF-2, passed through the town of Deltaville along its path from Fishing Bay to the Rappahannock River (damage path and photos).

WAVY-TV out of Hampton Roads took helicopter footage of tornado damage in and around the town of Deltaville.

One of the first tornadoes to touch down on Saturday was the EF-0 that the National Weather Service office in Blacksburg, Virginia confirmed near the town of Vesuvius.

Roanoke’s WSLS-TV has footage of the damage and an eyewitness account of the tornado.

A brief EF-1 tornado touched down in the southwestern portion of the county, according to a National Weather Service storm survey team from the Wakefield office..

See Gloucester County for a full description of the EF-3 tornado that touched down near the Surry Nuclear Power Plant.

Flash flooding claimed the lives of a woman and eight-year-old child after they and a nine-year-old boy attempted to cross a bridge that had been overrun by a rain-swollen Rockfish Run Creek.

One woman died after an 80-foot-tall oak tree fell on a mobile home in the county, following strong winds associated with the a line of thunderstorms that passed through the area that afternoon.

Note: Due to the large number of tornadoes, I’ve had to limit this list to the counties closest to the Virginia border and the Raleigh area. For further information, please visit the websites for the National Weather Service offices in Raleigh and Morehead City, North Carolina and Greensville-Spartanburg and Charleston, South Carolina.

The National Weather Service office in Wakefield, Virginia sent a storm survey team to Bertie County, North Carolina. There meteorologists discovered two separate tornadoes had touched down Saturday evening. The first, an EF-3, had a path length of almost 19 miles between the towns of Askewville and Harrellsville. It claimed 11 lives and injured another 50 people. The second, an EF-1, had a path length of 8 miles between Colerain and Harrellsville. The NWS also produced a map with the tracks and damage photos.

The National Weather Service office in Blacksburg, Virginia dispatched a storm survey team to the town of Jericho, where an EF-1 tornado touched down near town.

See Hoke County for details about the EF-3 tornado that passed through Cumberland County.

The National Weather Service in Raleigh captured damage photos from a tornadic storm that passed through the county. See pages 2 through 6.

See Hoke County for details about the EF-3 tornado that passed through Cumberland County.

The National Weather Service in Raleigh captured damage photos from a tornadic storm that passed through the county. See pages 7 through 11.

A storm survey team from the NWS office in Raleigh confirmed that an EF-3 tornado touched down in near Wayside in Hoke County, and passed through the Faytetteville, Dun, and Smithfield communities in Cumberland and Harnett Counties.

The National Weather Service in Raleigh captured damage photos from a tornadic storm that passed through the county. See page 1.

The National Weather Service in Raleigh confirmed an EF-3 tornado touched down near Sanford. This tornado left damage along a 63-mile path from the Sanford and Broadway communities into Holly Springs and the city of Raleigh in Wake County. This tornado was responsible for five deaths and an as-yet-unknown number of injuries. Damage photographs are included with the PDF from the NWS.

A preliminary report from a National Weather Service storm survey team from the Greensville-Spartanburg, South Carolina office indicates that an EF-1 tornado touched down north of Salisbury.

See Lee County for a description of the large, EF-3 tornado that affected Wake County.

Cassie Mentha has created a Google map to show damage in downtown Raleigh.

Shaw University has been forced to close for the remainder of the semester due to the damage it received following Saturday’s storm.