A bloodbath at Fredericksburg

150 years ago this week, over 100,000 Union soldiers moved into Fredericksburg, just 60 miles north of Richmond. If you’ve been reading this column for the past few months, you might have forgotten that there were actual battles going on during the Civil War. We’ve been a little more focused on the homefront as events transpired further north, but now that we find ourselves in December 1862, the war once again returns to Virginia–just 50 miles north of Richmond. But first, a little catching up is in order.

The last battle we covered was the Second Battle of Bull Run in August, after which Gen. Robert E. Lee took his Confederate army north into Maryland, occupying Union territory for the first time. Following the defeat at Bull Run, Union Gen. John Pope was relieved of command, and his army was merged into Gen. George B. McClellan’s Army of the Potomac. McClellan and Lee faced off in September near Sharpsburg, Maryland at the Battle of Antietam, the bloodiest day of the Civil War. While Antietam was considered a Union victory because Lee’s invasion of the North was halted, McClellan had a much larger force and should have crushed Lee’s army were it not for his overly cautious nature and poor coordination of troops. In addition, he did not take advantage of Lee’s retreat to pursue and strike another blow. Lincoln, frustrated by McClellan’s inaction put another general in command of the Army of the Potomac in November of 1862. This time it would be led by the awesomely facial-haired Gen. Ambrose Burnside. 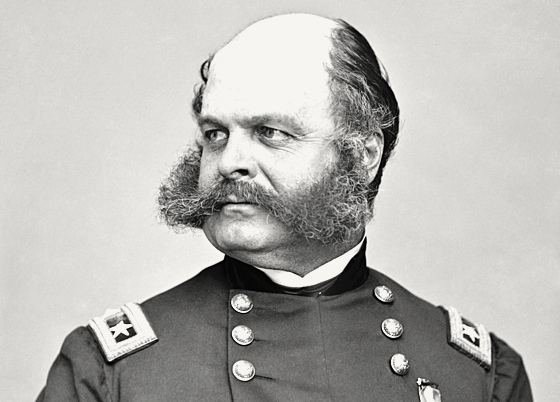 Burnside, eager to change the pace and direction of the campaign, decided to quickly march his army 40 miles south to Fredericksburg in an effort to get there before Lee. If all went as planned, there would be little opposition waiting and Burnside could easily move on Richmond. With Gen. “Stonewall” Jackson in the Shenandoah Valley and Gen. James Longstreet in Culpeper, Lee had no forces to mount a quick defense of Fredericksburg. In order to take the city, Burnside knew he’d need to quickly cross the Rappahannock River. All the bridges near Fredericksburg had been destroyed earlier in the war, so he ordered the engineers and the equipment needed to build pontoon bridges to meet him north of Fredericksburg. These bridges would become his undoing.

The pontoon bridges were several days late, arriving on November 25th. They were soon joined by Lee’s Army of Northern Virginia, waiting for them on the other side of the river. Burnside’s whole strategy of crossing the Rappahannock before Lee’s arrival had failed. Feeling pressure from Washington and Lincoln, Burnside decided to press forward regardless. In the hours before dawn, two New York regiments started work on building pontoon bridges across the river. It wasn’t long before Confederate sharpshooters, hidden among the buildings in the city, started firing relentlessly at the engineers trying to complete the bridges. In an effort to stop the sharpshooters, Burnside commanded his 150 artillery guns to fire upon the city. After two hours of bombardment, the artillery guns stopped firing and the wary engineers returned to the task of completing the bridges, only to find themselves under fire again from the Confederate sharpshooters. Well-entrenched and hiding in basements, the Confederate soldiers had lost only a few of their own in the ineffective artillery attack. Burnside next sent Federal troops across the river in pontoon boats to root out the sharpshooters. They fought fiercely in the streets of Fredericksburg, finally forcing the sharpshooters to withdraw back to the main Confederate line outside of town. With the threat removed, Burnside went about finishing the bridges as dusk fell and finally entered the city of Fredericksburg.

The morning of December 12th, Burnside continued to bring reinforcements into Fredericksburg, while Union soldiers began widespread looting of the city. One soldier recalled:

Furniture of all sorts is strewn along the streets… Every nameable household utensil or article of furniture, stoves, crockery and glass-ware, pots, kettles and tins, are scattered, and smashed and thrown everywhere, indoors and out, as if there had fallen a shower of them in the midst of a mighty whirlwind.

While the looting took place, Burnside started making plans for an assault the following morning. The Confederates waited on the heights south of Fredericksburg. In front of them was a vast expanse that the Union soldiers would soon have to cross, exposing them to deadly Confederate artillery fire from multiple sides.

That following morning, Burnside would focus his attacks in two places. He would strike south of Fredericksburg and in the hills nearest to the city at a place called Marye’s Heights. The first Union attack of the day took place south of the city. Troops led by Gen. George Meade marched forward, encountering Confederate artillery fire from the start, but the heaviest blow came from a hidden 14-gun battalion in the woods under Jackson’s command. As Meade approached, the artillery let loose a deadly volley and stopped the momentum of the assault. Union artillery responded and the two artillery units battled it out for over an hour. Finally a well-aimed Union shot hit one of the Confederate artillery wagons, sending up a large explosion and gave the Yankees cause to let out a cheer. Meade saw an opportunity and ordered his men to charge forward into the woods, only to find he’d discovered a 600-yard undefended area of Jackson’s line. Union soldiers quickly engaged in flanking attacks on either side of the gap in the line. This breakthrough could have had a huge impact on the day’s fighting, but other nearby Union generals failed to supplement Meade’s attack, and Jackson soon called up reinforcements to counter-attack and succeeded in pushing Meade back. The fighting for the rest of the day in this area would be inconclusive.

Further north at Marye’s heights, the Union troops began their assault around noon. The Confederate position at Marye’s Heights was near the crest of the hill, along a sunken road protected by a stone wall. In front of the stone wall were open fields punctuated by a few houses and fences–leaving the charging Union forces very little protection. The artillery positioned at the top of the heights also allowed for wide coverage and left little safe ground for the Union offensive. One of Confederate Gen. James Longstreet’s artillerymen remarked, “General, we cover that ground now so well that we will comb it as with a fine-tooth comb. A chicken could not live on that field when we open on it.” Throughout the day, Burnside would test that theory, repeatedly sending troops to attack the Confederate position, only to incur devastating losses. Troops who made it through the seemingly-endless barrage of artillery fire in the open field were mowed down by gunfire as they neared the stone wall. That stone wall, the objective which would cost thousands of lives that day was never touched by Federal soldiers. Lee watched the carnage unfolding from a nearby hill and remarked to Longstreet, “It is well that war is so terrible. We should grow too fond of it.” When darkness fell, the Union assault was finally halted.

Despite their numerical advantage, the Union forces had more than twice the casualties in the battle. Over 12,600 Union soldiers were killed, wounded, or missing in the Battle for Fredericksburg, with two-thirds of their casualties inflicted in front of the stone wall. Burnside wanted to renew the assault in the morning, but was talked out of it by his subordinates. The Army of the Potomac would withdraw from Fredericksburg the following day.

Burnside hadn’t given up on Richmond just yet…and he wasn’t willing to wait until Spring either. In January, we’ll learn of one more attempt by Burnside that would either make or break his standing as the commander of the Army of the Potomac.