The Possession: Put your dybbuk in that box

You might be tempted to call The Posession the Jewish Exorcist. You wouldn’t be wrong, but you’d be selling the movie short. I’m sure glad that at some point The Ring became the archetype for a whole set of American horror films. I’ve had my fill (for now) of realistic violence from movies like House of 1000 Corpses and The (new) Texas Chainsaw Massacre. Nowadays if you want to make a quality horror flick, you simply must cast a young, creepy-looking girl.1 The Possession not only takes cues from The Ring but also from 1973’s The Exorcist–in fact, you might be tempted to call The Posession the Jewish Exorcist. You wouldn’t be wrong, but you’d be selling the movie short.

The Possession claims to be based on “a true story,” and I suppose you could call it that. The film’s wooden box (featured so prominently that it’s one of the main characters) is, in fact, based on a real wooden box called the dybbuk box. In 2004 the dybbuk box popped up on Ebay with an accompanying story that claimed it contained a dybbuk, a malevolent demon from Jewish folklore that have a tendency to possess people. The box changed hands several times with each owner reporting various ill effects. Eventually the whole thing became an urban legend of sorts, which led to The Possession’s screenplay. 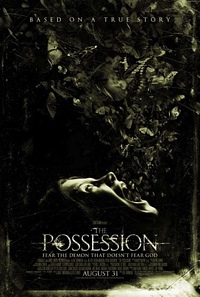 The film opens with the dybbuk box, set on a fireplace mantle, whispering malevolently to an older woman. Because a creepy old box whispering at you in Hebrew is pretty messed up, she attempts to smash the box with a hammer. In an unforgiving scene, she’s crushed, deformed, and tossed around the room. Her son2 comes home to find her broken on the floor.

Cut to the Breneks: Stephanie (Kyra Sedgwick), soon-to-be ex-husband Clyde (Jeffrey Dean Morgan, Watchmen), and daughters Em (Natasha Calis) and Hannah. Clyde and Stephanie shuffle the children between their respective houses on weekends in the familiar Divorced American Family Ritual. Clyde works too much and misses much of his daughters’ lives. Stephanie has a new, fastidious boyfriend that’s implemented new family rules like no shoes or pizza in the house. The girls stick up for each other, but one harbors hope for a reconciliation between their parents and one harbors serious resentment. All actors involved do a great job of taking these potentially cliched roles and turning them into a believable American family.

On one of Clyde’s weekends with the kids, they stop at a yard sale to buy dishes to furnish his new, spartan suburban home.3 In addition to dishware, Em finds the dybbuk box and takes it back to Clyde’s new house. It’s pretty obvious to horror movies fans4 that if you find an old, slightly terrifying box, inscribed in a language you can’t read, you probably shouldn’t open that thing up. But kids will be kids, and after Em hears the box literally calling to her in the middle of the night, she, of course, opens the box. It’s all downhill from there.

Once Clyde decides that ridding his family of the terrible box-induced horrors is a bit over his head, he does the obvious and enlists the bearded experts: rabbis! Actually, Clyde finds one rabbi in particular: Matisyahu! You know, the famous Jewish / reaggae / hip-hop star? Surely you’re familiar? If not, he’s worth checking out. Matisyahu is well cast as a young, helpful, and deeply spiritual rabbi. He joins the family and fills the role of Young Catholic Priest from The Exorisist.

The Possession comes to the table with a well balanced plan of attack to scare your socks off. It doesn’t rely on just special effects, gore, or startle factor to get the job done, it uses each sparingly to great effect. The whole thing plays out over a distinctly barren and cold set, think Let the Right One In. Director Ole Bornedal is from Denmark after all! Bornedal made a great call to let Calis carry the film and eschew cheesy (or gory) special effects. She’s simultaneously irresistibly charming, with her gap-toothed smile, and terrifying as a gangly, demon-possessed preteen (as if regular preteens weren’t terrifying enough).

The Possession could have easily been yet another Jewish ripoff of The Exorcist, but thanks to some even-handed directing and, you know, actual actors (and some surprise performances by new faces) it ends up pretty good!5

Movies about Judaica are great! Horror movies are great! Especially ones where they didn’t pull the actors out of the bottom of a ditch somewhere.

You are a dybbuk and are worried about the possibility of Matisyahu banishing you to an eternity inside of the dybbuk box.