Stupid Kids: were you ever a teenager?

Were you ever a teenager? Did you attend high school? Did you experience adolescent feeeeeeelings? Then Stupid Kids, now showing at the Richmond Triangle Players, will surely resonate with you. Were you ever a teenager? Did you attend high school? Did you experience adolescent feeeeeeelings? Then Stupid Kids, now showing at the Richmond Triangle Players, will surely resonate with you.

Stupid Kids is a four-person play directed by Jason Campbell that follows four teenagers as they wade through the labyrinth that is the high school relationship experience. Jim, Judy, John (“Neechee”), and Jane (“Kimberly”) all go to the same high school, but they are most definitely not all alike. Jim and Judy form the duo of popular kids, while Neechee (spelled phonetically so the masses can say it, the character tells the audience) and Kimberly (because the name of Patti Smith’s little sister suits her better than “Jane”) are the outcasts. The problem is that our outcasts Neechee and Kimberly have the desperate desire to be noticed (who doesn’t in high school?)…and desperate crushes on Jim and Judy (respectively).

Judy, played by Courtney McCotter, and Kimberly, played by Kerry McGee, at first steal the show with Judy’s hilarious-because-we-all-knew-someone-in-high-school-like-that shrill perky performance and Kimberly’s defiant eff-the-man stance that masks her deep desire to just be liked by Judy. Jim, played by Alexander Gerber, is a familiar motorcycle-loving, cool toughguy, and it’s great to see his character so completely oblivious to Neechee’s (Joe Winters) subtle longings. The beauty of these character archetypes is that anyone who went to high school can overlay them with people from memory, whether they’re friends, enemies, or ourselves. 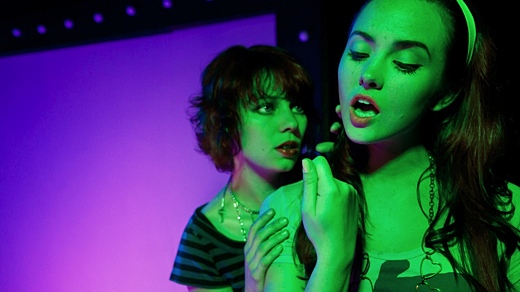 And the feelings! Oh, the teenage angst that bubbles over from the stage via Kimberly and Neechee! Neechee and Kimberly are often seen exchanging poetry that they’ve written, and Kimberly puts it best when, after a heartfelt and earnest reading, she explains bluntly to Neechee that, “I have a lot of feelings.”

Isn’t that the truth, Teenage Selves Of Old (and present teenagers, if you’re reading this)? The poetic interludes provide insight into the characters in a way that more traditional monologues might not, since the writing of soulful poetry is such a pivotal thing in teenagerhood. In Kimberly’s “Letter to Judy” poem, I think audiences will find something to relate to no matter what social circle they might have been part of in high school:

How could you not feel a connection with that? (I mean, unless you were a robot as a teenager. If that was the case, by all means, you’re pardoned for not feeling feelings about the above.)

Alas, as is all too often the case with teenage crushes and desires, hopes are dashed! We are heartbroken with Kimberly and Neechee when ultimately, the outcasts remain outcasts, and their crushes rebuff them, though this is also satisfyingly realistic. However, what’s interesting about Stupid Kids is its ultimate empathy not only for the two outcast gay characters, but its final look at Jim and Judy as they have to grapple with the way in which they must keep their popularity and status within their own tyrannical social group.

Ultimately, the story of Neechee and Kimberly, along with Jim and Judy, is a story of teenagers who could be so many different teenagers fighting against the pressure to conform. When Kimberly says, “We’ve been invisible our whole lives…it’s a tough life, I admit…but we make it. We’ve found ways to color our world with beauty and speed and we drink our courage and it sustains us,” the audience drinks that in, in part because at some level, the need for courage and beauty in life–and especially in high school–is such a universal theme. It’s baggage we’ve all surely carried.

The Smiths — How Soon Is Now?

Perhaps the loveliest part of the story, though, is that there is this glorious window into the future presented at the very end (a 1980’s Facebook check-in, as it were), in which we see little lights of happiness for Neechee and Kimberly. I dare you to walk away from the ending without a satisfied smile on your face.