With his buildings in the US and China (and in countries in between), Steven Holl has amassed an impressive collection of structures that are both modern and environmentally-minded. His work is now coming to Richmond. I chatted with Steven Holl, architect of VCU’s soon-to-be Institute for Contemporary Art–a spectacle of modern vision and design–in the lobby of the Jefferson Hotel, a building that embodies Richmond’s architectural and historical past. A past not lost on Steven Holl.

“Richmond is a very important city of history,” said the renowned architect this past Monday afternoon, mere hours before he lectured on the campus of VCU. In discussing the city, he was quick to mention Thomas Jefferson, principal designer of the Virginia State Capitol. “Richmond has this bestowed connection to architecture,” he said. In 2015, Holl’s own contribution to Richmond architecture will rise at the corner of Belvedere and Broad. 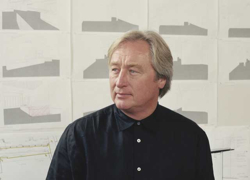 His firm, Steven Holl Architects, competed against 64 worldwide firms to win final design rights for the building from VCU, a process that took about four months. During that time, Holl visited Richmond on four separate occasions1 to survey the campus and the city. “You must really think of the building in relation to its site,” he said of his approach to design. “I’m of the mind you shouldn’t take a style of architecture and move it from city to city.”

Holl is best known for his addition to the Nelson-Atkins Museum of Art in Kansas City; the Swiss Embassy in Washington, D.C.; MIT’s Simmons Hall in Cambridge, Massachusetts; among others. Honored by TIME in 2001 as “America’s Best Architect,” and most recently awarded the gold medal by the American Institute of Architects, Holl’s work incorporates both modern aesthetics and environmental sensibilities.

He believes the use of solar power, green roofs, recycled water, geothermal energy, and other like-minded methods are “the only intelligent way to move into the future.” For the ICA, he aspires to the industry’s highest recognition in that regard: LEED Platinum.

Formed by the U.S. Green Building Council in 2000 to encourage environmental quality, the Leadership in Energy and Environmental Design (LEED) is an internationally recognized third party verifier of green buildings.2 Platinum is the highest honor awarded. “We’re shooting for that,” said Holl about the ICA achieving Platinum certification. He said that talks are currently underway as to whether the ICA will ultimately feature aspects required to achieve that distinction.3 However, one aspect of the building that is for certain is the reliance on natural light.

At this point in our chat, Holl pointed towards the cluster of lights hanging from the hotel ceiling. The Jefferson, said Holl, needs these artificial lights, as do many other buildings, even on a day with ample sunshine. The added warmth these lights produce, and the energy they expend, are far from practical. That’s why they won’t be in the ICA.

Instead, strategically positioned windows and skylights will illuminate the building’s interior. “You can use [the ICA] without turning the lights on,” said Holl. He believes that natural light affirms the interconnectedness that we, as people, hold with nature–an interconnectedness he wants his buildings to embolden. “Natural light is our umbilical cord to our natural surroundings.”

Resting at the edge of VCU’s Monroe Park campus, Holl hopes that the ICA will serve as a metaphoric cornerstone for the University. “The actual form of the building is a unique one,” he said. “One I’ve never done before.”

Initial plans called for two exhibit galleries among the 38,000 square foot building (which will also include a lecture hall, classrooms, offices, and a cafe). Holl instead designed four galleries that snake away from each other, including one that does so vertically. This represents forking time, Holl’s idea that contemporary art is “no longer a grand narrative” or collective, but rather independent forces (sculpture, painting, etc.) that may not intersect at all in coming years. “The drawing line in time is the future, not the past” said Holl. For some, Holl’s modern building clashes with the city’s historic sensibilities.

While he values the historic architecture found in areas like Jackson Ward and Church Hill, Holl opposes replicating the past. In Richmond or anywhere else. “The idea of preserving the past is important, but don’t ape the past,” he said. “Pressure the authority of the past in juxtaposition with an author of the moment.” He wants the ICA to embody that juxtaposition and serve as a signature building for both VCU and Richmond.

At age 64, Holl has amassed an impressive and prestigious portfolio of unique buildings found in many countries. Others his age eye a looming retirement. Not Holl. “I gave my life to this,” he said about architecture. “My buildings are my children.”

To further prove this point, he removed his iPhone and played me a YouTube video. Uploaded one month ago, it’s a tongue-in-cheek ode to Simmons Hall, the MIT dormitory that opened in 2002. Even ten years after its dedication, people still sing the praises of the building he designed. Literally.

After playing the clip, Holl pocketed his phone and smiled. “Why would I retire?”